Updated: Ryerson in talks to get Wi-Fi hot spots 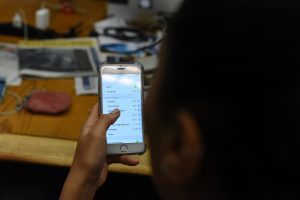 Students will be able to connect their phones and laptops to WiFI hot spots soon. (Tagwa Moyo/ Ryersonian)

Update: A previous version of this article did not state PawCharge’s involvement in the initiative. The headline has been altered to acknowledge the hot spot lending initiative is not for certain, but rather, in discussion.

The Ryerson University Library and Archives (RULA) is in the planning stages of lending Wi-Fi hot spot devices to students. The RULA, the Borrowing Lending Services (BLS) and the Library Information Technology Services (LITS) are discussing the logistics of a lending program, which would give out small wireless gadgets that provide Internet access.

“The BLS and the LITS have discussed the ideas, have agreed to work together on it and are in the process of working through the details,” Mandissa Arlain, the RULA’s communications librarian, said.

The idea was proposed by PawCharge, a Ryerson startup that works with portable battery pack dispensers.

Mansorian suggested the idea as a way for students to work on assignments during their commute.

“I spend almost two hours a day travelling to and from campus. I wish the library would lend mobile Wi-Fi hot spot devices so I could better use my time by watching online tutorials and accessing D2L,” Mansorian wrote in SoapBox.

Mansorian is now working with the RULA to make his suggestion come to life.

The program, funded by Google and the City of Toronto, is designed for low-income families who do not have access to Wi-Fi at home.

The hot spots have unlimited Internet, and are lent out for six months during its ongoing pilot program.

Sara Tavakolian, the senior branch head at the Toronto Public Library, told the Ryersonian that the hot spot lending program has been successful.

“We are looking to expand in 2017, because the pilot has been very successful. The feedback has been very positive from participants,” Tavakolian said.

Toronto Public Library has 189 devices in circulation across six branches.

The library got a special rate with Rogers Communications of $50 per month, per device. If a user loses the device, there is a $215 replacement fee.

Because the Wi-Fi hot spot initiative is still in discussion, the cost of the devices for Ryerson students is yet to be determined.

An eating disorder on camera