Ryerson is reviewing and updating its current freedom of speech statement, last approved by the senate in 2010.

The current statement reads: “The right to freedom of speech comes with the responsibility to exercise that right in an atmosphere free of intimidation and in an environment that supports the free speech rights of those with opposing views.”

This review comes after incidents such as the Ryerson Students’ Union (RSU) rejection of the Ryerson Men’s Issues Awareness Society official group status application, the university’s recent cancellation of a panel that included University of Toronto professor Jordan Peterson, and Ryerson’s failing grade in the 2017 Campus Freedom Index.

In 2014, the University of Chicago appointed a committee to review the school’s freedom of expression statement. It was the first university in North America to do so.

Other North American universities, including the University of British Columbia, are reviewing their statements.

At Ryerson, a final draft must be approved by the senate before any university statement can be changed.

On Nov. 7, Ryerson senate was told a subcommittee, including Ryerson faculty and student representation, had been formed to review the current statement.

“The Ryerson community will be consulted as the review process unfolds,” said John Turtle, the secretary of the senate.

The subcommittee met for the first time in mid-November. James Turk, one of the committee members and the director of Ryerson’s Centre for Free Expression, said a decision on the possible changes to the current freedom of speech statement will not be made any time soon. 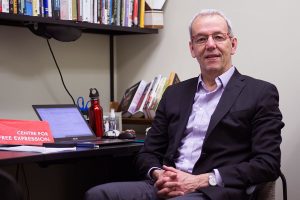 “It should easily take six months or so to go through this process and consider many difficult questions that need to be addressed,” he said.

Turk wrote a blog post in August about Ryerson’s “bad call” on cancelling the Peterson panel.

“The panel discussion was set to be on ‘The Stifling of Free Speech on University Campuses’ and was not a panel riddled with neo-Nazis, but a group of conservative academics and one right-wing journalist,” Turk said.

Peterson gained notoriety when a student in his class asked to be identified with non-gender pronouns. Peterson refused, and has been featured on YouTube videos discussing his argument on gender pronouns and free speech.

Turk said he couldn’t be more opposed to Peterson’s position, but respects his right to say the things he wants to say.

Camryn Harlick, vice-president of equity for the RSU, said they believe the review on the freedom of speech statement is necessary so professors like Peterson, “being absolutely disgusting and ridiculous,” can’t come to university campuses and possibly promote hateful views.

However, Turk believes that this statement review is necessary so Peterson and other professors have the freedom to express their views.

Turk said free speech is important at universities because it is a place where students can express their views and discuss others’ opinions.

“A university, more than general society, is to be a place where all ideas can be spoken, assessed, analyzed and critiqued,” Turk said. “If we want to advance knowledge and educate students, then they need a place to articulate their views for the rest of us to comment on them.”