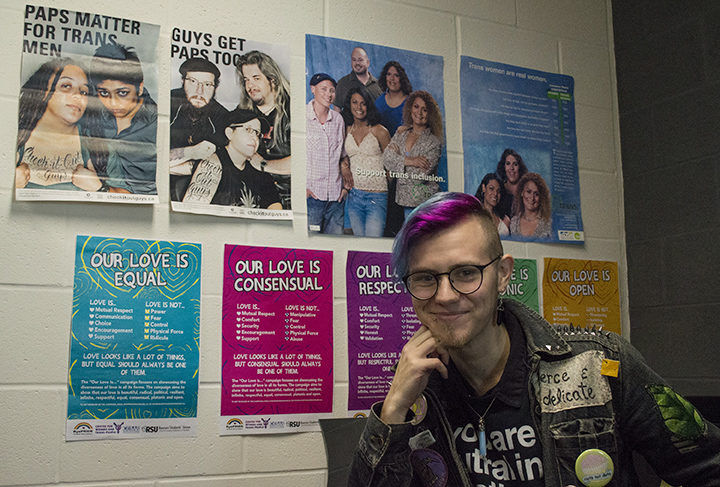 Markus Harwood-Jones in the Trans Collective’d office in the SCC on Feb. 23, 2016. (Olivia McLeod / Ryersonian Staff)

Starting in March, the Ryerson Trans Collective plans to launch a campaign to tackle systemic cissexism and transphobia on campus.

“Recently what I have been finding very challenging is dealing with transphobia in the classroom and transphobic professors,” said Markus Harwood-Jones, who also goes by Star.“It’s everything from professors who teach without us in mind at all … to very overt, blatant examples of transphobia.”

Harwood-Jones, who uses the pronouns he and they, is an organizer of the Trans Collective at Ryerson, which also headed the successful campaign to implement gender-neutral washrooms on campus last fall. On Monday, university administration approved a poster campaign which will inform students of the existing single-stall washrooms and encourage inclusion for trans (the shortened adjective is used by activists and researchers) students accessing the washrooms.

Members of the collective began discussing issues to do with the treatment of trans students in classrooms in the fall of 2015.

“I know many students have felt like the classroom just isn’t made for them and courses just aren’t made for them,” said Harwood-Jones. “They’ve felt so alienated to the point when some have considered dropping out.”

The Trans Collective will be holding three “How to Deal” workshops in March and April. The workshops will discuss how to respond to faculty who create an unwelcoming learning environment, how to lodge a complaint, and will also give students the opportunity to highlight experiences of harassment or ignorance from peers or authority figures at Ryerson.

The collective has invited representatives from the Ryerson Students’ Union (RSU), the Continuing Education Students’ Association of Ryerson (CESAR), Office of the Ombudsperson and the university’s equity service department to attend.

“As much as any policy hopes to create a perfect environment for people, some members of the community feel as though their point of view trumps any of the policies,” said Rabia Idrees, RSU vice-president of equity.  “There may also be a lack of knowledge towards these policies and the consequences associated with violating them.”

While the workshops are aimed to be peer-to-peer support, anyone from the Ryerson community is welcome. In tandem with the workshops, the Trans Collective is also creating a zine — a small self-published collection of work — as a way to share the experiences of trans students with the rest of the student body. The zine will be distributed on campus mid-March.

“A lot of people just don’t get non-binarism,” said Chrys Saget-Richard, a member of the Queer and Trans People of Colour Collective (QTPOC) and Racialised Students’ Collective .

Saget-Richard, who uses the pronoun they, said they feel silenced and uncomfortable when a professor or student misgenders them.

“Until people self-educate on a mass scale, I don’t know how much we’re going to get done,” they said.

A 2011 Egale Canada study found that 90 per cent of trans high school students hear transphobic comments daily and 78 per cent reported they felt unsafe at school. The study also found that LGBTQ youth of colour experience a higher degree of isolation due to systemic racism they encounter.

The Trans Collective plans to ask the QTPOC to contribute to the zine and workshops.

Universities across Canada have been slowly restructuring their campuses to be safer, more inclusive spaces for trans students, often following student activism.

“It’s tough to shine light on these issues when there is not a community in place for support,” said Idrees. “Trans students only now have a legitimate platform to stand on to make a systematic difference.”

In 2013, Ryerson developed services to support students and faculty who are transitioning: a process when a person changes their name, pronouns and/or physical appearance so that they more accurately reflect the gender they identify with.

Through the human resources department, students are able to have their name changed on university documents without the need for government identification and faculty can use a step-by-step guide for updating records. Online, the HR department set up a “frequently asked questions” web page that aims to educate the Ryerson community on trans issues.

“One of our prevailing messages to all groups on campus is that one of the best ways to deal with any challenging topic on our campus is through the provision of education and awareness,” said Darrell Bowden, from the office of equity, diversity and awareness. “Having as many touch points as possible that engage the community in topics related to equity, diversity and inclusion aids in building cultural competence and opens the campus climate to being more accepting (to) all of our individual differences and similarities.”

Ryerson does not offer any specific training to faculty on transgender issues, however, they provide faculty members with a more generic orientation program which incorporates a discussion on diversity, said interim president Mohamed Lachemi.

“It is important for students, and particularly trans students, faculty and staff to feel safe and included on campus. We will do everything to include all members of our community,” said Lachemi.