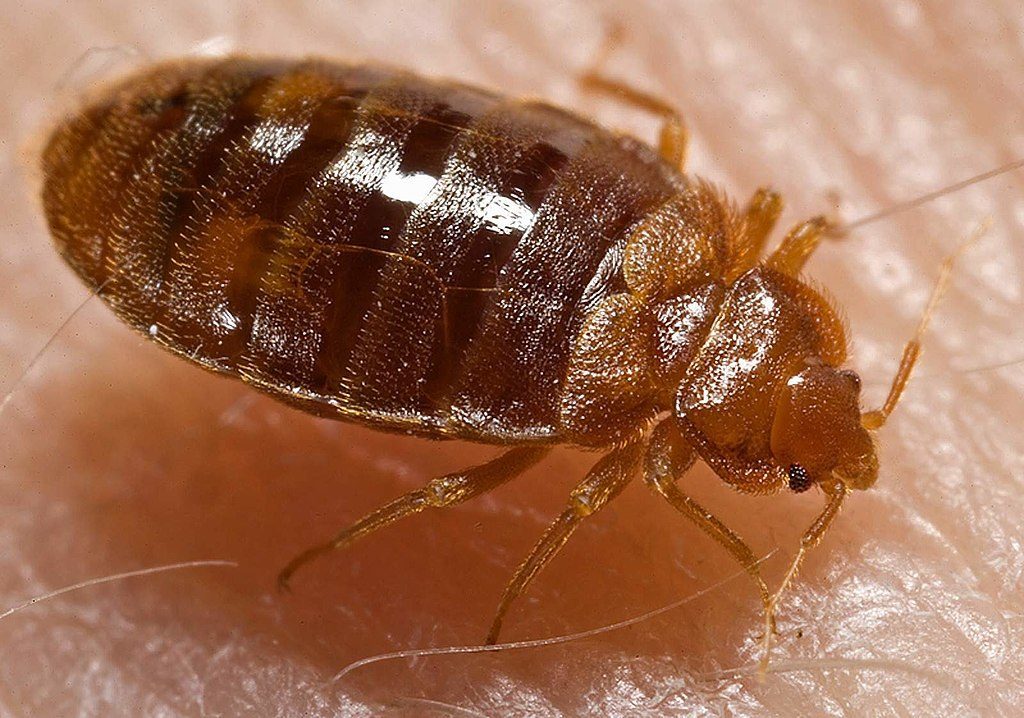 The Ryersonian has learned that officials at Ryerson University have been aware of the Victoria Building’s bed bug problem since at least November 2017.
Photo by Piotr Naskrecki, via Wikimedia Commons.

The Ryersonian has learned that university officials received at least two separate complaints regarding the Victoria Building’s bed bug problem since November 2017, four months before any extermination attempts were made, and contrary to the university’s statement suggesting it first received a report about the issue in December 2017. 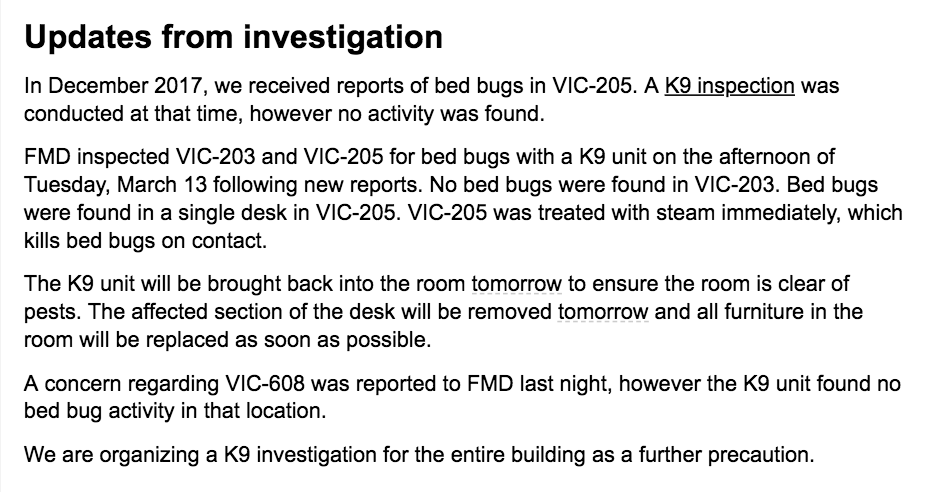 The university’s statement regarding the ongoing bed bug investigation in the Victoria Building.

On Nov. 6, 2017, journalism professor Joyce Smith received an email from Bianca McCauley, a student in her NNS 101 class, alerting her to the infestation in Room 205’s desks.

I am not sure if you are aware of this matter, so I thought that I would bring it to your attention- I believe there is a bed bug infestation in the desks at VIC 205, the room where you lecture on Mondays.

Over the past week I have noticed weird bites on my wrists all of which are in rows – a trait of bed bug bites. And today during lecture, I noticed bugs crawling in and out of the middle of the desks only to have one fall out of my sleeve later on.

Hopefully you can do something about this before more students are affected.

“Immediately, I sent a message to facility services,” said Smith, who said she had to call to confirm the complaint had been received by Ryerson’s Facilities Management and Development (FMD) department.

During that call, Smith was told hers was the only one regarding the issue.

“They said I was the only one who had a complaint and then they mentioned my colleague’s name and I thought, ‘that’s weird, why is she in there?’” said Smith. “Turned out she was helping Robert file his [complaint].”

“I did report the problem in November and again in December.  On both occasions I was told the problem had been dealt with,” Osborne wrote in an email to the Ryersonian.

Osborne said at one point he put one of the crushed corpses of the bugs biting his students into a plastic bag to provide to university officials as proof of the infestation. After being told the issue had been dealt with, his students continued to be bitten.

Osborne then sent a video of the desk’s infestation to a journalism school administrator on Dec. 4, 2017, a point confirmed by Brent Smyth, the journalism student who helped break the story with The Eyeopener.

A video of the infestation, taken the same day as the one sent to FMD and university officials. Courtesy, Brent Smyth.

“I can say from my perspective, I know for a fact they [FMD] had evidence mid-November that there was bed-bug problem and that evidence was re-submitted to them in an even stronger form in early December,” Osborne said later, in a phone interview.

Dan Greenwood, FCAD’s director of operations confirmed he too had seen the video at the time, and forwarded it to FMD administrators in an email.

“And they did something, I had no reason to believe they didn’t,” said Greenwood, who said he was told the exterminators and their dogs hadn’t found any bed bugs in the classroom.

FMD confirmed it did receive reports of the bed bugs in November 2017, as well as the video sent in December, but that visual and K9 inspections did not find any of the bugs seen in the video.

Smith said after her complaint was lodged, she was told the school was monitoring the room, yet it continued to be used for classes – including hers.

“They said, ‘Yeah, we’re monitoring it, we put traps in to catch some,’ but I never heard back from them after that, so I would tell my students, ‘Don’t put your bags [on the desks],’” said Smith. “I remember telling a lecturer that came in after me to be careful.”

“Pest control inspections are conducted weekly as part of an ongoing pest management program. Ryerson has had no confirmations of pest activity during these inspections.”

However, this week, following evidence of bed bugs captured by The Eyeopener and the attention of various local and national media outlets, the school says it has investigated the building again and has found bed bugs isolated in one desk in one room of the building.

However, according to Smith, the issue was not restricted to a single desk. McCauley, who sat near the back of the room, also saw them in various parts of the room.

“I was watching them in my row, and in the next row in front of me … little bugs crawling in and out of [the middle of the desks],” said McCauley.

McCauley said after discovering the rashes on her wrists, her doctor diagnosed the bites as likely bed bugs, something she confirmed by Googling photos of the bugs and comparing them to the ones in the desks.

“I guess I kind of self-diagnosed myself, in a way,” she said.

McCauley said after the incident, she never went back to the class.