Hold onto your Presto cards, GTA students, Ryerson may be coming to Brampton.

Deb Matthews, minister of advanced education and skills development for the Ontario government, confirmed to the Toronto Star yesterday that Ryerson is interested in expanding its campus, in partnership with Sheridan College. 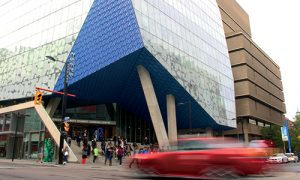 Ryerson University has submitted a joint application with Sheridan to the province to open a satellite campus in Brampton, Ont. (Ryersonian file photo)

Brampton is quickly growing in size and development, and a university might just be what the city needs.

The province of Ontario has expressed that it will contribute $180 million towards the development of two new university sites in Ontario.

The other proposed option is a partnership between Wilfrid Laurier University and Conestoga College in Milton, another rapidly expanding city.

Matthews is excited to make these visions a reality, as are Sheridan and Ryerson.

Ryerson is working on detailing their proposal for government approval, and looking at focusing the campus on STEAM (science, technology, engineering, arts and math) careers.

Linda Jeffrey, the mayor of Brampton, acknowledges that Ryerson was one of the first universities to take initiative on expanding into the city.

“Everyone is excited. I feel like this was the best Christmas present I’ve ever had. It has completely changed the outlook of our city and really put us on the map,” she told the Star.

Ontario will spend the next few weeks reviewing and evaluating Ryerson’s application. A decision is expected in the fall.