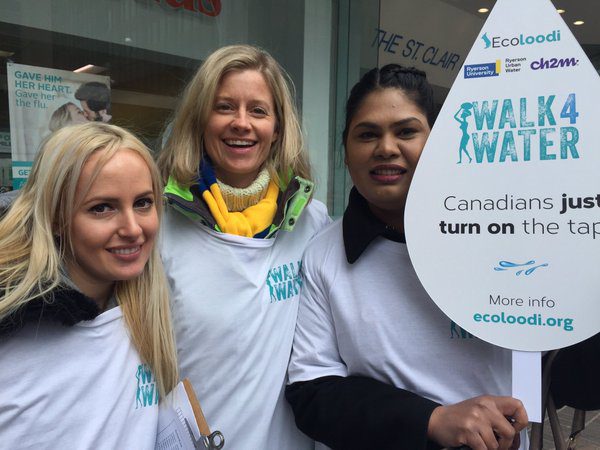 A Ryerson research group plunged into World Water Day as Toronto participated in the 23-year old international event with its own twist.

Ryerson Urban Water (RUW) helped organized Walk4Water as part of the day, held March 22. The aim of the day was to underline inequalities in the global distribution of the basic resource, potable water.

“We’re in a very privileged, luxurious position [in Canada]” said Angela Murphy, the manager of outreach for RUW. “And we don’t necessarily value our water, nor our energy, nor so many of our natural resources, our freedoms … I don’t think you can truly value those components until they’ve been threatened in some way.”

The water-hauling represented the task that those in some developing nations endure on a daily basis.

The distance of six kilometres is widely cited as the average that people in developing countries must travel in order to access water.

“In Canada, we just turn on the tap,” said Ludiwine Clouzot, an organizer and the founder and president of Ecoloodi, a not-for-profit organization that educates children three to 12 about international water concerns.

The event spouted from conversations Clouzot had last summer at Science Rendezvous at Ryerson, an annual public science showcase held at Yonge-Dundas Square.

Clouzot found that individuals weren’t exposed to critical information about water until they were teenagers. She said the key is earlier exposure.

“If you plant the seed when they’re very young, for them, it will be a like a habit for them to take care of water,” Clouzot said.

Nancy Griffin, the national chair of Water Dialogues of the International Women’s Federation said an understanding of these issues ought to be in the elementary curriculum.