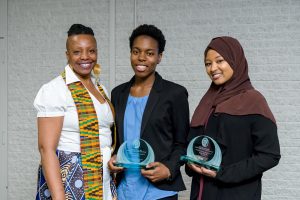 Viola Desmond was a Canadian black civil rights activist who was arrested in 1946 for sitting in a whites-only section during the screening of a movie. In December 2016, it was announced that Desmond would become the new face of the $10 bill, which will begin circulation in 2018.

In honour of Desmond, Ryerson recognizes black women across campus and within the community for their continuing contribution to shaping black history. Annually, the faculty award, the staff award and the student award are named after different black Canadian women throughout history. The Viola Desmond Award is the only standing award each year and goes to a high school student in the community. A Viola Desmond Bursary is awarded to a current Ryerson student who has helped to empower the black community both on and off campus

The faculty award was named after Wanda Thomas Bernard this year and was presented to Annette Bailey, an associate professor with the Daphne Cockwell School of Nursing. Bernard is a social worker and educator, and was one of nine non-partisan senators appointed by Prime Minister Justin Trudeau in October 2016.

Bernard says that contributions by black women in Canada have been “pretty invisible.” She says that the average Canadian doesn’t know about Viola Desmond, but they do know about Rosa Parks.

“That’s one of the reasons why award ceremonies like this one are so important, because it brings to light not only Viola Desmond and her work, but also the work of all of the people who are receiving awards,” says Bernard. Ryerson is one of the only universities in Canada to have an annual award dedicated to Viola Desmond.

Devenae Bryce is studying in a certificate program at the Chang School of Continuing Education, and received the Paulette Senior award for a current Ryerson student. Bryce, who just finished her final season with the school’s varsity women’s basketball team, said that even she didn’t know about the award before receiving it, but that it’s great that Ryerson is recognizing women of colour. Bryce says she’s honoured and motivated to receive an award named after and presented by Paulette Senior.

“I know she went through a lot and now she’s the president of the Canadian Women’s Foundation. It’s nice to see that women of colour can still succeed and excel in society today, regardless of how hard it is and the oppression women face in general,” Bryce says.

The Viola Desmond Day awards are based on a nomination process. Members of the Ryerson community nominate a faculty member, a staff member and a current student, while high school students from across the city are nominated by members of their local community. The ceremony is hosted by Ryerson’s Black History Awareness Committee and takes place on the first Monday of March each year in order to continue the conversation about Black History Month beyond the month of February.

‘I’ll Have Some Fries With A Side Of Dat Ass’

Voting begins for Ryerson Board of Governors and Senate Elections