The Laurentian Voyageurs dashed the hopes of the Ryerson Rams women’s soccer team in a last-minute 2-1 victory in extra time.

This was Ryerson’s first post-season match in the last six years, but unfortunately, reason to celebrate was short-lived.

The game was tied at one after regular time, pushing another half hour of play. Then, just before the referee blew the whistle at the 120-minute mark, the Laurentian Voyageurs had a goal-scoring opportunity on a set piece.

From a free kick, the opposing team launched the ball into the 18-yard box. The ball bounced off the ground before their forward Sarah Sanford scored the winning header. 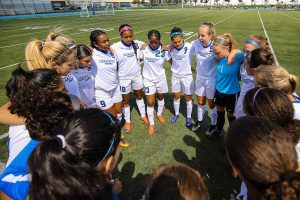 The first game of the season was against Laurentian University in August. (Photo by Alex D’Addese)

The Rams had reason to believe they could get past the first round since they defeated Laurentian in their last two encounters.

They won 1-0 against the Voyageurs back in August, then faced the team again on Oct. 14 where the final score was 2-0. But the outcome was different the third time around, even though they started the game off strong.

Rams defender Victoria Watson, who plays for the Jamaican national team, opened the scoresheet with a goal before half. Watson will go in the history books with the program’s first ever post-season goal.

They did well to hold the lead until the 64th minute. A throw-in from Laurentian was dangerously close to the Ram’s net. Rams keeper Elisa Lapadula tried to clear the ball out of danger but Sam Selkirk got to it first, scoring the equalizer.

Both teams were trying to create goal opportunities, but the win didn’t come until the dramatic end, which would have gone to penalty shootouts if the score had stayed the same.

After playing 14 games this season, Rams won seven, tied six and lost three. They will be back for another shot at the goal next year.