In the fourth episode of the fall season of Blue & Gold, we explore Egerton Ryerson’s colonial legacy and how it’s affecting Ryerson University and its Indigenous community today. After the Ryersonian released our “Monumental Challenges” special edition all about statues and colonialism two weeks ago, valid claims were made that our reporting lacked Indigenous voices. In response to these claims, this podcast was reworked and re-examined before it was published to ensure those voices are heard.

Firstly, Jasmine delves into who Egerton Ryerson was, and why his statue stands on Ryerson University’s campus today.

Later, Dania speaks to Emily Peotto, a Ryersonian reporter who has published a story about the cost of not changing Ryerson’s name, and how a lack of change would affect Indigenous students.

Then, Sidra has all the details about the symbolism of the statue’s vandalism over the summer, why colonial statues across the world are being rethought and re-evaluated, and how the debate to remove Ryerson’s statue from campus began.

Next, Dania talks to Nicole Ineese-Nash, an Anishinaabe research associate at Ryerson University, and director of “Finding our Power Together,” a partnership between young people in First Nations communities and non-Indigenous allies. She speaks about her research involving issues of mental illness among Indigenous youth in Canada and how it relates to Ryerson’s debate about removing our colonial statue.

Dania also speaks with Maaz Khan, a Ryerson alum who started a petition back in June to remove Ryerson’s statue, which now has over 10,000 signatures. He tells us why he was driven to take action.

And finally Alex discusses the new task force assigned by Ryerson president Lachemi to examine Egerton Ryerson’s colonial legacy and its effect on the school.

Blue and Gold is a weekly podcast from the Ryersonian profiling each week’s top stories; created, hosted and produced by Jasmine Rach, Dania Ali, Sidra Jafri and Alex Cyr. 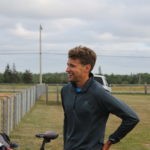 Alex Cyr is a Master's student at Ryerson who contributes to The Globe and Mail, Times and Transcript, and The XC.

Liberals hold on to Toronto Centre after close byelection results