Living in New York is a dream for many people all over the world, including Ryerson alumna Christina Dun. Through refining her education at journalism school and plenty of hard work, she turned her dreams into a reality and created a working life for herself in the concrete jungle.

Growing up in the suburbs of Surrey, B.C., Dun wrote for her high school newspaper in hopes of becoming a journalist one day. “I loved it so much,” she said, knowing that she wanted to make journalism her career.  “In high school, I started looking at schools that offered journalism, and it was either Ryerson or Carleton.”

Dun graduated from Ryerson’s School of Journalism in 2014, and it’s where she found her interest in broadcast and video editing. “I really enjoyed doing video-related stuff at Ryerson. I did the documentary capstone class. I think I just saw that there were more opportunities for video.”

Now, Dun is a multimedia journalist at Refinery29 in Manhattan. Refinery29 is an American fashion, style and beauty website with 27 million monthly unique views of mainly women from ages 18 to 34. From her current position, Dun can attests to how useful video editing skills are. “I do a lot of video editing now which I started doing at Ryerson. I’m friends with my internship coordinator at Refinery29, and when we’re looking for interns and they don’t have video editing skills, we pass. Having that skill helps, because when I was interning there, they needed people who could do that.” 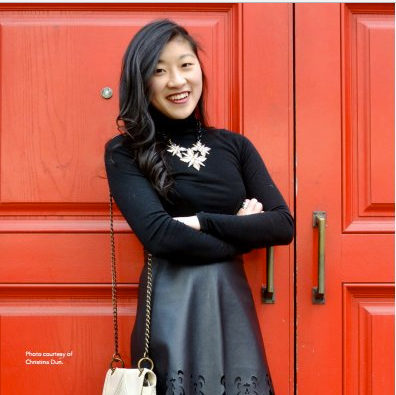 Christina Dun is a Ryerson journalism alumna who works at Refinery29 in Manhattan. (Courtesy Christina Dun)

Before landing a job at Refinery29, she decided to continue her education overseas and complete a master’s degree at New York University. “I loved doing journalism at Ryerson and thought okay, I might as well continue and try to learn more about the industry I want to find a career in. So I applied super last-minute for this program at NYU called Reporting the Nation and New York. It was like this weird, very small cohort in NYU journalism.”  Reporting the Nation and New York is a multimedia course that aims to teach students to “rebel against traditional media” and think of innovative new ways to tell stories in journalism.

This led Dun to file an F1 visa application; the student visa allows students accepted into U.S. schools to study and work for up to a year after graduation. “Thankfully, Refinery29 sponsored me and that kicked in now. It’s just limiting because yes, I can work for Refinery which is great, but I don’t have the option to freelance. That’s kind of a struggle because I’m a creative person and I like to find other stories that might not work for Refinery but that may work elsewhere. But if I do it elsewhere, I can’t get paid for it.”

Despite moving to the city that never sleeps, Dun believes it’s important to keep in touch with Ryerson. “I just got an email from Kevin MacLean. He was one of my first professors at Ryerson ever, and he saw me in the Ryerson University magazine and emailed me. I love hearing from old professors and people that have really helped. The people that I met there, I don’t think I would be where I am without them.”

From keeping in touch with professors, to walking on Gould Street when she visits Toronto, Dun believes it’s important to stay connected with her alma mater. “It’s helpful to have those ties and it’s a part of who I am now. It’s really helpful to stay in touch and go back.”

Dun would not change her path in anyway, “I come from the suburbs of Vancouver. When I go back there, it makes me realize how grateful I am to be able to leave where I grew up and experience a lot of different things outside of that.”

Watch: Five reasons you should vote in the RSU election