The G League is the official minor league basketball organization of the NBA.

The Long Island Nets, an affiliate of the Brooklyn Nets, announced Best as their 42nd overall draft pick on Saturday. 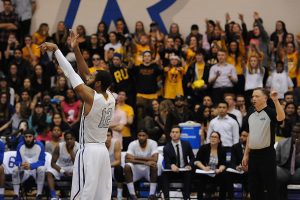 Aaron Best led the Ryerson men’s basketball to an OUA championship in 2016 as captain. (Photo courtesy of Ryerson Athletics)

The 26 teams in the G League this season have to choose at least three players during the draft, making it a great time to recruit young athletes.

Hours after the 25-year-old had been drafted by the Nets, he was traded to the Raptors 905 team.

The G League prepares players, coaches, officials and trainers for the professional teams.  Getting into the league is considered a huge step towards reaching the NBA.

The Scarborough-born player, who played basketball for Juventus in Lithuania last season, was one of 146 players eligible to be picked in the 2017 NBA G League draft, according to their website. Best’s supporters, including his former Ryerson coach, knew this was a possibility.

Roy Rana, who has coached basketball at Ryerson University for almost a decade, had messages of love and support for the Rams star.

“His professional journey is taking him into the G League and that’s incredible. That’s very exciting for him and for us,” Rana said.

Best had a successful five-year career with the Ryerson Rams between 2011 and 2016 while he studied business management. In his first year with the squad, he earned OUA East all-rookie honours for his season performance, where he averaged 12.6 points per match after 16 conference games.

Rana remembers Best as a “quiet” character and “tremendously respectful” when he first joined the team.

“By the end he was the captain, winning our first OUA championship,” Rana said.

During his last season in 2016, Best led the Rams as captain to their first-ever OUA Wilson Cup. That same year he was named CIS second-team All-Canadian and the Ryersonian Male Athlete of the Year.

Over his five years at the university, he became a student-athlete to watch, achieving both team and individual titles.

There have been other Ryerson grads who moved up to pro-basketball. Guard Jahmal Jones signed a professional contract with a team in the Czech Republic in 2015. Adika Peter-McNeilly, who was named U SPORTS First-Team All-Canadian last season, went to play basketball in the German Bundesliga.

Rana said these examples of players moving into professional leagues speaks to the talent development at the university and the quality of Canadian university athletics programs.