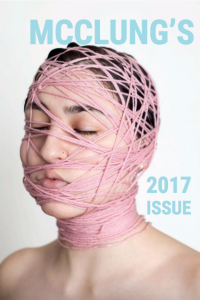 Screenshot of the last McClung’s issue published in 2017.

Days after the Indigenous Students’ Association (ISA) at Ryerson deemed Minowe Magazine’s name cultural appropriation, the publication announced the first-ever issue is at a halt.

McClung’s magazine was renamed on Nov. 14 at “It Starts With Us”—an event hosted by the publication in the Rogers Communications Centre. It was attended by Minowe Magazine executives, writers and an Indigenous student on the ISA, who had been working alongside the magazine to come up with name ideas.

Minowe is defined by the Ojibwe People’s Dictionary as “s/he has a good voice, speaks well.”

The editorial team behind the magazine brought on an equity director this year to, in part, facilitate a name change based on concerns that the magazine was named after a woman who supported the practice of eugenics.

Eugenics refers to the scientific theory that the controlled breeding of humans with desirable traits will create a supreme human race.

“I cannot justify not approaching the ISA separately and sooner and I am sorry for the harm that this has caused,” she said.

At the end of November, the ISA voted against supporting the magazine’s name change to Minowe Magazine in a group chat, said Julianna Alton, a member of the ISA.

“We have come to define this act of McClung’s’ name change to ‘Minowe’ as an act of cultural appropriation,” said Alton, in a message to the Ryersonian.

Arezoo Najibzadeh, Minowe Magazine’s equity director, said changing the name was about deciding not to celebrate women who’ve harmed others and paying tribute to countless amazing Indigenous leaders at Ryerson.

“Through our conversations with Sarah, we thought it’d be most appropriate if we used an Indigenous word, an Ojibwa word, that actually reflects the land that Ryerson University is built upon,” said Najibzadeh.

“Indigenous women continue to be impacted by eugenics laws and eugenicist ideology that was supported by Nellie McClung so it’d only be fair to do that,” she said.

The magazine has been published out of Ryerson since 1992.

Alton, who’s an Ojibwa of the Algonquin Region First Nation, said the magazine formally contacted the ISA in early September about changing its name to reflect its values. Alton, a fifth-year history student at Ryerson, said one ISA member took on the task of communicating with the magazine, but the ISA never formally discussed the change together.

“I offered to do language research under the impression that the magazine was an intersectional feminist magazine and would have Indigenous folks heavily involved in operating it,” said Sarah Dennis-Kooji, the ISA member from Toronto who was consulting with the magazine.

“They must have assumed that they hired me to do all of their community engagement work, which is not how that type of work gets done and all I agreed to was coming up with a good word.”

Najibzadeh said she corresponded with Dennis-Kooji through the ISA email address. 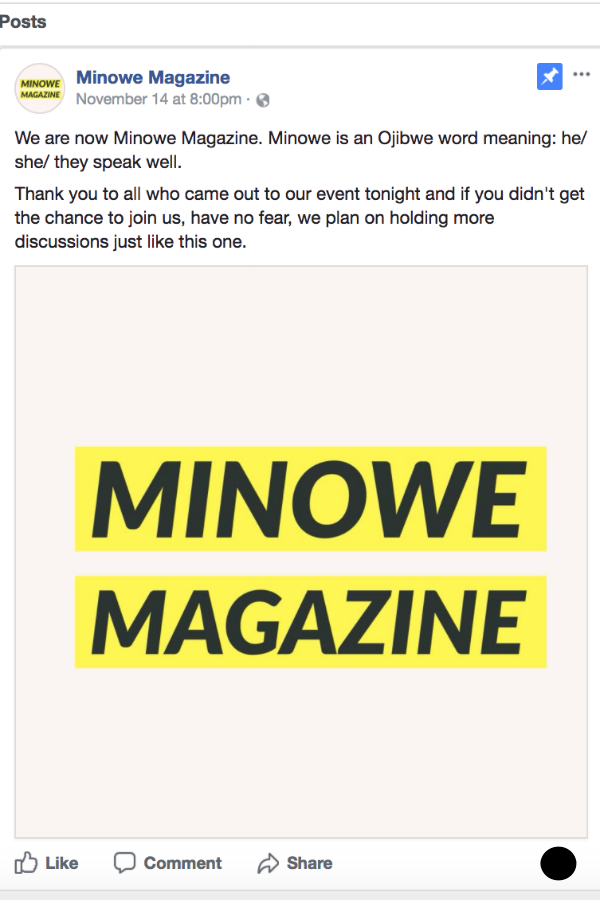 A screenshot of the Facebook announcement of McClung‘s new name.

The equity director added she didn’t want to tokenize the single Indigenous student’s opinion, so she contacted friends and administration who identify as Indigenous to ensure the new name was appropriate.

She said faculty responded, “if Sarah from the ISA is supporting this, then we have no problem.”

While the magazine is volunteer-run, they are offering Dennis-Kooji a $100 cheque for the consultation and language research she conducted.

“If it is an Ojibwa word, then I feel that its use is strongly tokenistic as McClung’s has no current Indigenous staff, as well as is not an Indigenous issues based magazine,” said Alton.

Duncan McCue, a visiting journalist at Ryerson, said there’s no doubt in his mind journalists have a responsibility when it comes to reconciliation.

“The very fact that there is a dispute suggests that both the Indigenous Students’ Association needs to do some work in terms of how their members are going out and working with members of the non-Indigenous community,” said McCue, a member of the Chippewas of Georgina Island First Nation. “It also shows that the (magazine) journalists themselves are going to need to be adaptable to making sure that they include a wide variety of Indigenous voices in their consultations.”

McCue, who’s a CBC journalist, said the magazine’s act, an effort to begin the conversation and respect the Indigenous peoples amongst the group it covers, is well meaning.

Najibzadeh said the magazine’s been on tight deadlines so they didn’t get the chance to meet with multiple ISA representatives and she wasn’t sure how the ISA was discussing the matter internally.

“There are multiple views within the Indigenous community and they need to be taken into consideration,” said McCue. “That can be challenging and puzzling to non-Indigenous groups that want to do the right thing and consult, but that’s what reconciliation is all about.”

McCue said the magazine reached out to him for advice on the name but he declined because he was too busy at the time.

Alton said the ISA originally believed it was a good gesture but the idea to use an Ojibwa word was never presented to the group nor was the premise of the name changing to recognize Indigenous leaders.

She said the student consulting the magazine sent a message to the ISA group chat on Nov. 14, the night the name change was announced, to ask the ISA if they would endorse the name change.

Alton said the ISA executives never gave their OK on the endorsement. She said the consultant student did not seem confident about the name change either and informed the group the magazine would be told “no”.

“I told the magazine that they did not have an ISA endorsement after they presented the name with the false endorsement,” said Dennis-Kooji, referring to the magazine presenting the new name at the “It Starts With Us” event.

“I was a little shocked when that happened because they were not transparent with me,” she said.

She said she told the magazine they had to go through the process of asking, and that she couldn’t guarantee an ISA vote in support of the name.

At this point, the magazine was drafting a letter to ask the ISA for their endorsement on the name change. Dennis-Kooji said she generously offered to help the magazine edit their initial request.

“This miscommunication is on us and I take full responsibility for the outcome of that miscommunication,” she said. “Sarah has been nothing but extremely helpful and I am so thankful to have worked with her.”

Alton said the ISA received an apologetic email from the magazine. She said the ISA responded to their email and plans to make a public statement this week.

The magazine said it sent a response to say it supported the ISA’s decision to make a public statement that will hold the magazine accountable for their name change and call upon the magazine to change the name from “Minowe”.

Alton, from the ISA, said the group accepts their own failings within the matter and will be addressing group functions that led to the issue getting out of hand.

Another member of the ISA, who agreed to an interview on the condition of anonymity, told the Ryersonian the name change was cultural appropriation.

“I’m seriously having a hard time believing that this actually happened,” the student said.

The message “got lost in the shuffle of the convo”.

“There was a breakdown in communication,” the student said. “But I think beyond that (the magazine) never should have thought that this was a good idea in the first place.” 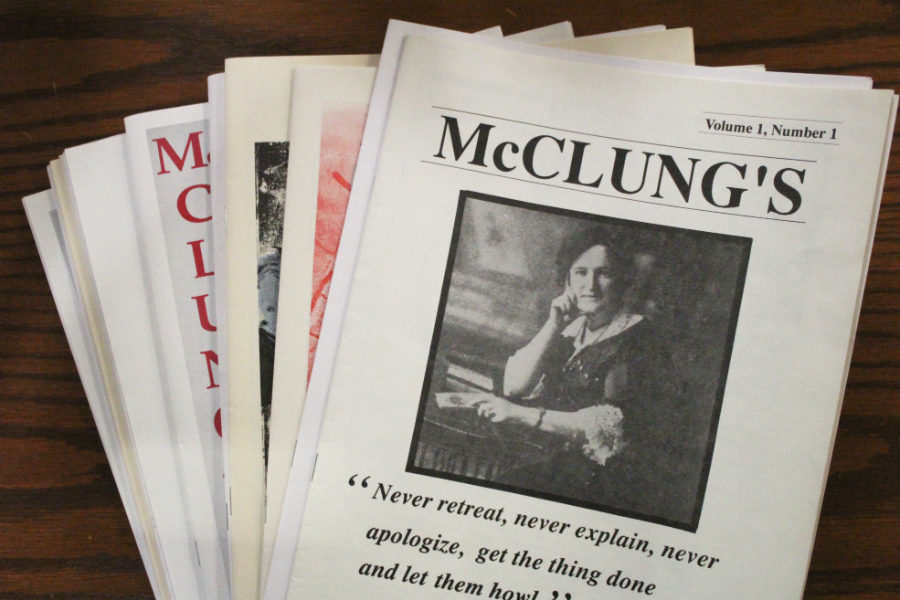 A stack of old McClung’s magazines on a desk at the Ryerson University Library on Nov. 29. (Photo by Maggie Macintosh)

McClung’s magazine was created in 1992. It was originally named after Nellie McClung, a Canadian writer and suffragette who fought for women’s rights to vote.

McClung was part of the Famous Five, a group of feminists, involved in the Persons Case. The feminists successfully appealed a Supreme Court of Canada ruling that women were not “qualified persons” in 1929. As a result, women were given full legal rights as “persons” and could serve in the Senate.

Najibzadeh said McClung has a history of racist and colonial violence against women.

Al Thorleifson has been studying McClung for decades as a teacher and resident of Manitou, Man.—the community where McClung lived early on in her career. He’s read all her books and works as the curator for his community’s archives.

“McClung believed society should take care of the vulnerable,” he said.

Thorleifson said he supports anything that shows respect for Indigenous communities in Canada but that it’s unfair to use McClung’s involvement in eugenics as the excuse for the magazine’s name change.

He said he can only think of one relevant incident where McClung helped a disabled woman’s mother make the decision to get her daughter sterilized so she couldn’t have children. He said her reasoning was the daughter wouldn’t be able to care for children.

While McClung helped most women over 21 get the right to vote in national elections by 1919 in Canada, Indigenous women couldn’t cast ballots until 1960.

“The name change will not be the only thing Minowe will be doing to ensure that there’s ongoing dialogue and settler-Indigenous relationships on our campus,” Najibzadeh said.

The magazine’s executive plan to create an editorial position for an Indigenous writer or artist to create and curate Indigenous content next semester.

Najibzadeh said they’ve also talked about starting workshops for folks who don’t get lots of exposure to writing opportunities.

“As a supporter of the Colonialism 150 campaign, I hope that this inspires something in people in positions of power but our main duty and responsibility is to do justice by the name and by the intentions behind it,” Najibzadeh said.

The anonymous ISA student said they hope the magazine changes its name as soon as possible.

OPINION: My many bad ideas