In Islam, prayer is a sanction that is performed multiple times throughout the day, and the religion is specific about how prayers should be done. When prayer starts, the hands, feet and face should be washed with water. The person must pray standing on a prayer mat or some form of carpet, in the direction of where Mecca stands in Saudi Arabia. The most important prayer to perform above all is in the evening. 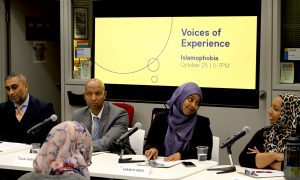 From left to right: Ali Najafi, Faisal Hassan, Samiya Abdi and Gilary Massa, panelists at the Voices of Experience: Islamophobia in the Workplace seminar on Oct. 25, speak about the trials they have faced in their careers. (Photo by Tawanna Hyman)

Nazia Habib, a nursing student and member of RIMSA, said there aren’t any rooms for her group to do their evening prayers at Ryerson.

“At one point, we had to have our prayers in the library room. It wasn’t the best spot because you could hear people having conversations, laughing with their friends, which made it hard to concentrate,” Habib said.

At the seminar Voices of Experience: Islamophobia in the Workplace held at Ryerson on Oct. 25, Samiya Abdi, a health promotion consultant and equity specialist, spoke about issues she’s faced when praying in her workplace.

“My first job, I was 19 years old and I was working at a call centre. My prayers would happen the same time I started my shift,” Abdi said. “I got permission from the people seated in my section, my area, that it was O.K. for me to pray. Three days later I was told I could no longer pray at work.”

Abdi argued to her boss that it only takes five minutes to pray — the same amount of time as taking a smoke break or a coffee break.

According to Abdi, her boss responded, “If you need to pray, you can pray in the washroom.”

After a legal battle with her workplace, Abdi was allowed to pray at work and had a room for herself to conduct her prayers.

Just like Abdi, Habib mentions there has been a struggle for Ryerson to provide RIMSA with an appropriate space for prayer.

Habib recounted an experience where her group members were put in a room with many windows and people were peeking through. It was awkward for them to pray because it’s supposed to be something private for a short period.

RIMSA President Ali Mulji has been meeting with Ryerson Students’ Union (RSU) associates this semester demanding space for his members. Fortunately for them, Habib said that the RSU has guaranteed RIMSA a room for prayer in the SCC for the second semester, although the location has not been confirmed yet.

“Having a prayer space is a key concern and our team is working on it,” RSU President Susan Nyaga said.

Nyaga mentioned that her team has offered their own personal board room at times for prayer space and requested that students get a prayer space that is carpeted and quiet.

“Islamophobia is really real at Ryerson, Muslim students face it and that’s why the RSU works to ensure that this doesn’t happen, by creating safe environment outside and inside classroom,” Nyaga said.

Along with proper accommodation for their prayers, RIMSA could also benefit from their office space on campus, according to Habib.

Habib said that having an official room was important because it was a meeting spot for all members to go to before they had their prayers. It was also a place where new Ryerson students could go if they were looking to build a community with their fellow Ismaili Muslim students.

“For frosh students, they don’t know where to go now. Everyone would meet in front of the office in the Student Campus Centre before we pray. Now we have a WhatsApp group,” Habib said.

In the future, Habib hopes that Ismaili Muslim students at Ryerson and in the workplace will always have proper accommodations.

“I feel like it’s about bringing awareness, once people know who we are, they will understand,” she said. “For the future, I don’t think Islamophobia will ever lower down, all we can do is bring awareness to as many people we can.”

Eating alone is the norm, but Ryerson grad’s app works to change that