BREAKING NEWS
The one where we say goodbye
Trading airports for AirPods
Centre Scope — S1 E10 — A Year of Persistence and Resistance
Lessons from 10 years of undergrad
Toronto kitchen provides fresh meals for homeless in the city
Arts & LifeMusicNewsOn CampusTop storiesWhat's Trending?

Some Ryerson students are angry six-cent tickets are being resold for more than $20.

The Ryerson Students’ Union [RSU] will be hosting a concert this Sunday, featuring DJ Esco and a “surprise guest” according to its Facebook event page. The price of a ticket is only six cents and according to the RSU, all proceeds will be donated to a charity. 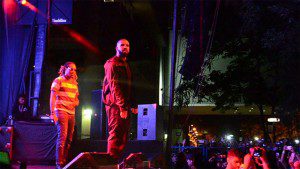 The last time the Ryerson Students’ Union hosted an event like this Drake dropped onto Gould St. (Ryersonian file photo)

A second round of tickets was released on Tuesday and concert-hopefuls saw the batch of 650 tickets sell out in less than 30 seconds.

“As soon as I went [online at 6 p.m.] the tickets were gone,” said Nazia Habib, a first-year nursing student.

The article continues below the Tweets.

Ryerson has a concert and tickets were being sold for 6 cents with proceeds going to charity and some people are reselling tickets for $50??

I pay tuition & student union fees so non-Ryerson students can attend a concert put on by Ryerson for $0.66. Toronto, you’re welcome.

The last time the RSU marketed an event like this Toronto-born rapper Drake dropped onto Gould St. to play a concert that reportedly cost students more than $200,000.

There’s an anticipation in the air as exams wind down seven months later. Drake famously named Toronto “the 6” after the 416 area code. The six-cent ticket price may be a hint, or not.

But unlike the Drake concert, Ryerson students weren’t given priority sale before the event opened up to the public. There was also no limit for the amount of tickets a person could buy.

As soon as the tickets sold out, scalpers raised the prices. On Kijiji, a simple search saw tickets being sold anywhere from $25 to $80.

Habib said people were messaging her to sell her tickets at a price around $20 or $30, but then they would tell her there is a bidding war going on.

“It makes me think what has the world come to,” said Habib. “People are [supposed to be] buying tickets for charity but they are reselling them to make money for themselves.”

The cost of the event is unknown as is the charity that’s the recipient of its proceeds.

RSU’s vice president of student life and events, Harman Singh, has not responded to many requests for comment.