The Ryerson Muslim Students’ Association (MSA) spent a cold and snowy Monday afternoon this week handing out charity bags to the homeless in Toronto.

This was inspired by Project Downtown, a North American charitable initiative that started in 2006 through MSA National.

Participation at Ryerson came through a collaboration between the MSA and Ryerson’s Ismaili MSA and is set to happen once every school year.

The groups said the need for this event at Ryerson stems from the fact that Toronto is the poverty capital of Canada. One in four children live in poverty in the country as of 2013. As well, over 5,000 individuals sleep outdoors and/or in shelters — 1,000 to 2,000 of which are youth.

“We were looking for events that would help bring the community together, as well as to give back to the community outside of Ryerson,” said Samaa Abou Houssein, a first-year nursing student and director of community and charity for the MSA. “What better way to do that than to help those in need that we see everyday walking here to Ryerson?” 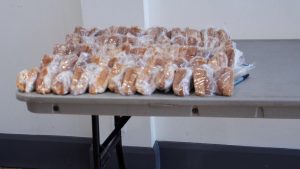 To do that, the MSA has held four meetings to plan out Project Downtown over the last month. For more support, they contacted Tehseen Jiwani, vice-president of the Ryerson Ismaili MSA and fourth-year computer science student, to get his association involved.

“We were thinking of what other way we could bring together people from all of the four MSAs on campus,” said Hirra Farooqi, a second-year journalism student and outreach director for the Ryerson MSA. “We’re excited to have a small event where we could give back but also make sure that everyone’s coming together and doing what we do best for the community.”

A team of around 30 to 40 students have been involved in planning, preparing or giving out food and other goods with the initiative. Over 200 blessing bags were made in total, which included items such as socks, water bottles, packs of tissues, bandages, greeting cards and pamphlets that note organizations and resources for support. Sandwiches and juice boxes were also distributed. 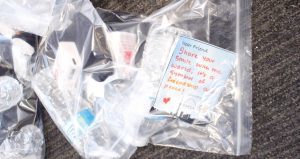 One of many blessing bags holding a kind message. (Bradly Shankar/Ryersonian Staff)

Farooqi said students paid extra attention to what was being donated because they wanted to include items that may not have been given out at previous charitable events. Feminine hygiene products like pads, for example, were included this year, despite not being given out in previous years. As well, she said that the groups have now added dog food for homeless people with pets. All of this was helped paid for through a LaunchGood crowdfunding campaign which, at the time of writing, has raised over $200 more than its $300 goal.

Jiwani said he’s proud of the way the different groups have come together for a common goal.

“We’re all one community working together to make this happen, even on a snowy day like this,” he said with a laugh.

Indeed, the weather wasn’t ideal, with -7 C temperatures and a steady snowfall in the city throughout the day. The initial plan was to give blessing bags to homeless people en route to shelters and community centres like The 519, which offers support to members of the LGBTQ community. 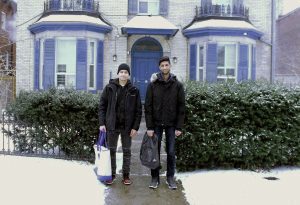 But because of the weather, there weren’t many homeless people outdoors, leading to groups having to check other locations, such as TTC stations, as well.

Houssein said she’s eager to continue doing these kinds of events in the future. Outside of the second Project Downtown, which the MSA hopes to kick off sometime in the 2017-2018 school year, she said they’re looking into more events to help those in need.

“We’ve seen the turnout of people wanting to be involved in the project, as well as the need for it,” she said. “What’s really heartwarming is seeing not just Muslims at this event but everybody just come together [for] the greater good. It’s a small way to pay it forward.”