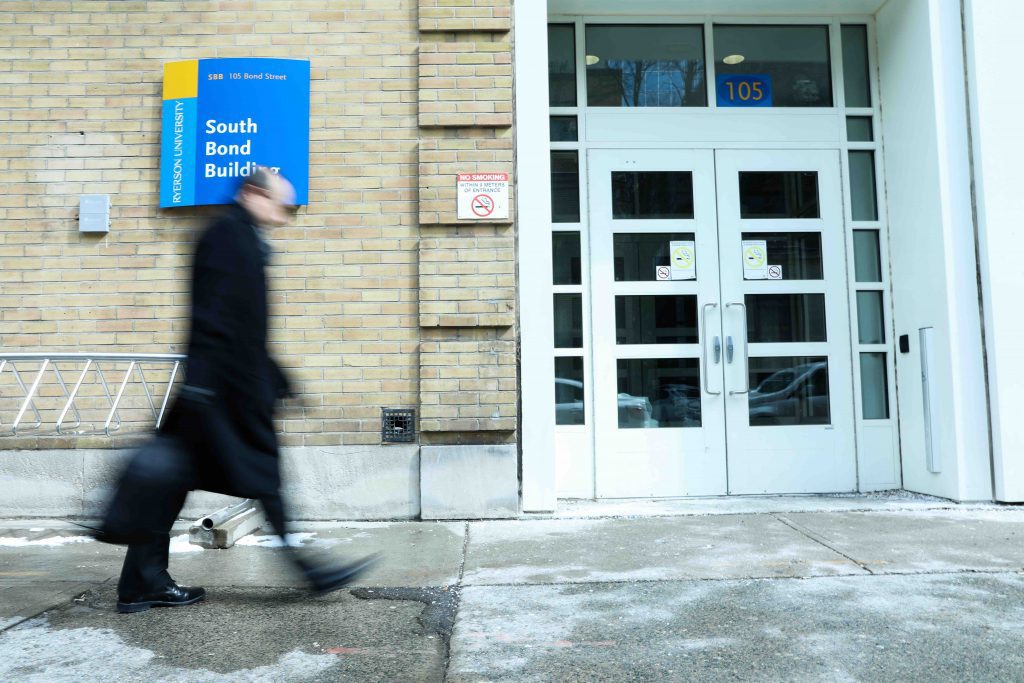 Ryerson University’s School of Urban and Regional Planning has cancelled its annual trips to the U.S. in response to President Donald Trump’s travel ban.

According to an email sent to urban planning students last month, the school made the decision to limit its field trips to Canadian destinations in 2017.

Chris De Sousa, professor and director of Ryerson’s School of Urban and Regional Planning wrote in the email that the decision was made to “ensure that no one in our community would face the barriers to participation that could result from shifting American travel policies.”

“Equity, diversity and inclusion are an essential part of all that we do at Ryerson,” De Sousa wrote in the email.

Normally, on these field trips, Ryerson flies by the border, De Sousa said in an interview. But some buses have had unique circumstances. There was an incident last Fall where one student was asked questions at the American border for a long period of time. “Some [faculty] have had students put into awkward positions based on their ethnicity,” De Sousa said.

In the email, he added that “[i]t is critical that the learning environment welcome a range of worldviews, experiences and knowledge, and in planning these experiential learning opportunities, we must hold those values paramount.”

As part of their degree studies in Ryerson’s urban planning program, students are required to participate in a six-day/five-night field trip in their third and fourth years. According to a curriculum guide, travelling to the U.S. for educational purposes is a regular occurrence for the school.

In past years, according to a recent Ryerson urban planning graduate, the school has gone on trips to Philadelphia, Washington, Chicago, Boston, Baltimore and New York.

Andrew Johnson is a proud Ryerson urban planning alumnus who graduated in 2009. During his time at Ryerson, looking back on his third-year trip to Pittsburgh in 2007, two of his classmates came to mind immediately. They would have been affected and perhaps not let into America since they have roots in two of the countries listed on Trump’s ban.

Johnson said that these students “would have been left out right away. It’s not fair to them to miss out on something like that.”

He said that the decision of cutting U.S. destinations only leaves Ottawa, Montreal, and Quebec City as viable Canadian destinations unless the type of study changes to a more small-town focus.

Johnson thought that one solution is to potentially offer a choice between one U.S. city and one Canadian city. The rationale behind this is that all students would have an option in how they approach their education.

“We recognize that many students had expressed interest to have these learning experiences situated in American cities,” De Sousa wrote in the email. “However, we are confident that alternative venues in Canadian locations will allow for similarly rich learning experiences.”

Students participating in the field trips travel and return as a group, supervised by faculty members, according to the urban planning school curriculum. Policies governing field trips are included in the PLG 530 and PLG 730 courses offered to urban planning students.

“As a community, our students come together during these trips,” De Sousa said. “It’s not only about the experience of learning, but us, as a group, coming together.”

However, the current political climate in America is not one for achieving unity from his perspective: “I think staying here is better for us…to come together as a group with shared values and inclusivity.”

Trump’s initial executive order barred citizens of seven Muslim-majority countries from entering America for 90 days. Trump’s second attempt at a temporary travel ban, which continues to target majority-Muslim countries, goes into effect Thursday. The action is currently being fought in court and is in the hands of U.S. federal judges.

De Sousa wrote that despite the fact that “legal proceedings are underway and the ultimate fate of the order still holds some ambiguity…several individuals en route or planning travel to the U.S. have seen their plans disrupted or cancelled.” 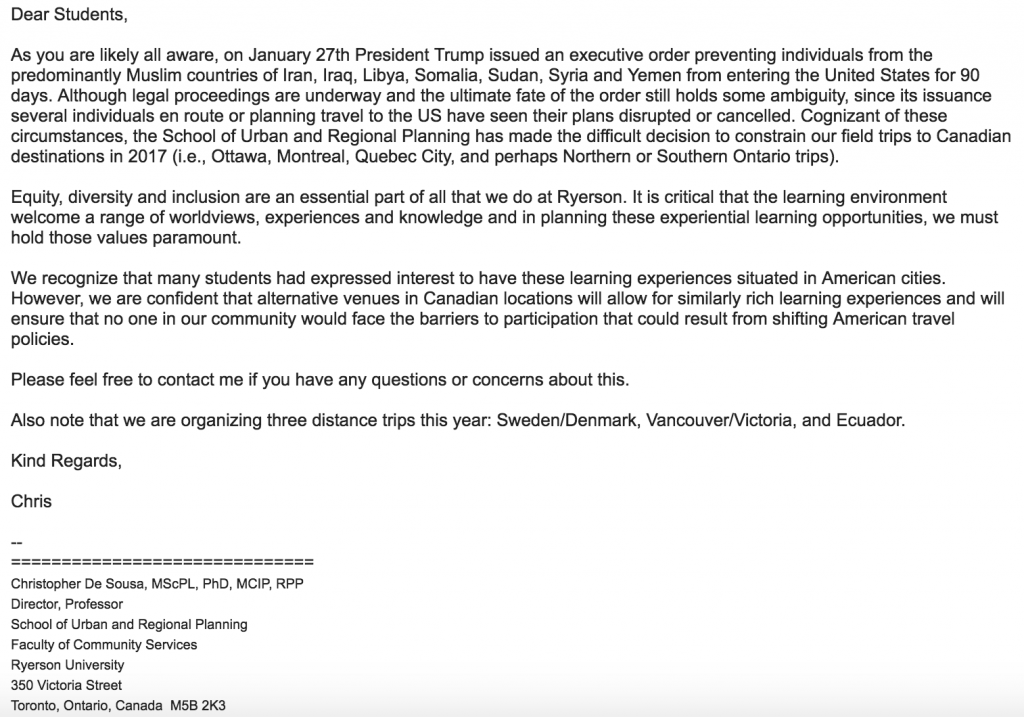 Trump’s executive order does not name the countries whose citizens are banned from entering the U.S. This political and highly controversial order refers to a statute that applies to seven Muslim-majority nations.

The countries affected by the initial executive order were Syria, Iran, Sudan, Libya, Somalia, Yemen and Iraq. Dual nationals were initially included in the ban as well.

The order also suspends America’s refugee system for a period of 120 days. Trump has rationalized this decision in the name of national security and keeping U.S. citizens safe.

According to the professor, he has received only one negative reaction, adding that the majority of the emails he has received were very favourable and students were proud of the decision from the school’s point of view. What’s proving to be more challenging is deciding on where, in Canada, they will travel to, he said: “That’s where I think students are going to have more of an issue.”

De Sousa told the Ryersonian that the U.S. has historically been a very inclusive place and he is hoping that Trump will respect that inclusivity over time. “But right now the message is not that way,” he said. “My hope is that the political climate will change and that this will be something that goes away and our students are able to go on U.S. trips again because they do enjoy it.”

De Sousa said that he is hopeful that one day, the faculty can return to implementing these U.S. trips. “Given what’s happening now, it’s a good time to stay in Canada and celebrate our [150th] birthday.”