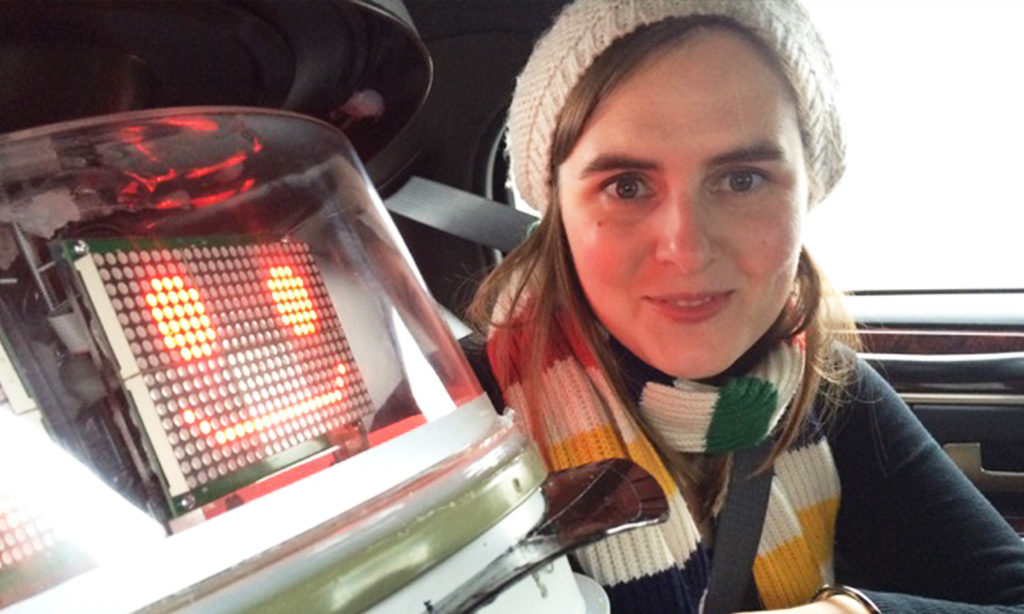 Frauke Zeller and her creation, HitchBOT, which became a viral hit when it set out on a hitchhiking mission across the country. (Courtesy Frauke Zeller)

Like many of Frauke Zeller’s students, Lauren Dwyer did not expect to work with robots when she entered Ryerson’s professional communications program.

Now a graduate, Dwyer explained, “I came from Newfoundland, fresh out of a psychology undergrad and decided to take communications. So as you can see, none of this points towards robots.”

But after working with Zeller, robotics has become a significant part of her life.

“Now I can’t imagine life without (robotics) and that’s what I plan on doing with my career.”

While Zeller is known to her students as a mentor who pushes the boundaries of traditional learning, many people know her best for one of her projects, HitchBOT. The famous hitchhiking robot that travelled across Canada with countless strangers along the Trans-Canada Highway, was her creation. But HitchBOT isn’t the only robot project she’s been involved with.

A robot capable of critiquing artwork, named my kulturBOT 3.0, as well as the early framework for a robot that can help humans deal with anxiety, are two other Ryerson robots that Zeller has had a hand in.

Like her students, she found her passion for robotics through her studies. She received her PhD from Kassel University, Germany in English linguistics and computational philology.

Her thesis focused on human-robot interaction.

“It seemed to be a natural fit with the robots,” Zeller said. “I was already really interested in technology and I found robots very interesting – like everyone – and I chose it as my PhD topic.”

Robotic interaction and linguistics in a basic sense can be explained as communicating with a robot through the senses that are programmed into it. That includes what the robot hears, sees or touches.

When she finished her PhD in 2005, she came to Canada after receiving one of Europe’s most distinguished individual research grants, the Marie Curie Fellowship from the European Commission.

During her fellowship she was introduced to David Harris Smith, an assistant professor at McMaster University. The two have since collaborated on many projects including Virtual Hamilton HitchBOT and my kulturBOT 3.0.  Working on my kulturBOT was their first project together.

“It was a fairly DIY kind of thing,” Smith said.

As a robot built on a floor sweeper with a mounted camera and a projector, it was able to roam around an art gallery and take pictures of the artwork, posting them to Twitter with captions quoting The Manifesto of Futurism, written by Italian art theorist and poet Filippo Marianettie.

They also collaborated on the Virtual Hamilton Project, an urban planning tool where users can create plans within a virtual world.

This helped Zeller build a framework for the Participatory Campus Planning project at Ryerson University. It is the same concept, with the added technology of an interactive table and wall display to help navigate the virtual campus.

And amongst all of these projects, was HitchBOT. The robot was created to find out, “can robots trust human beings?”
It became an online hit, and gained over 35,000 followers on Twitter during its three-week journey across the country.

Dwyer said that when she found out that Zeller was the creator of HitchBOT, she would do anything to work with her.

“I had followed HitchBOT from the start and had a total fan-girl moment (when I found out),” she said.

It was Dwyer’s major research project that Zeller helped to turn into a theoretical model for a companion robot that could help people with anxiety.

The robot is meant to help identify and manage anxiety in human behaviour.

Zeller said that this project was a perfect example of what she loves about the students she works with at Ryerson.
“I’m lucky that there was a student that was very talented and wanted to learn additional skills from me, but at the same time her knowledge is continuously very important,” she said.

And Zeller is capable of more than just introducing her students to robotics. She also pushes them to succeed after graduation.

“The next step will be to try to get funding and get (Dwyer) into a PhD program. That’s what she said she wants to do as her next step in advancing this project and I’m supporting her with that.”

Working with students like Dwyer is what has kept Zeller at Ryerson for years. She said that the innovative, go-getter attitude of the students that come out of

Ryerson is what makes it such a great place for her to work.