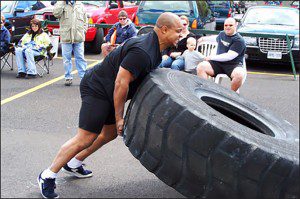 It is September and Ryerson athletes are at their annual retreat. It’s a chance to meet new members of the “Ramily” while reconnecting with returning players.

Staff members are introduced by Ivan Joseph, Ryerson’s athletic director, and athletes clap for each one.

Then, Joseph pauses, knowing what is about to come. He introduces Sam Walls, the strength and conditioning co-ordinator. The athletes erupt, standing as they applaud. Walls turns a shade of pink as he tries to hide the wide smile spreading across his face.

Walls, 41, from Windsor, Ont., brings experience to Ryerson athletics through his background in strongman competitions, weightlifting and teaching. However, his passion is what seems to drive athletes to the next level.

Walls became interested in strength and conditioning when he was a discus thrower for his track and field team in Grade 9. Walls says he enjoyed the results he saw from the mandatory workout.

He graduated from the University of Windsor in 2000 with an honours degree in human kinetics, the study of the human body and motion.

While at school, his hunger for strength and conditioning continued to grow.

He continued to pursue his career by taking the certified strength and conditioning certificate (CSCS) exam in 2003.

Although he was now qualified to teach weightlifting, he still had the desire to compete.

A shoulder injury from weightlifting led Walls to strongman training. Searching him on YouTube shows Walls in those competitions, deadlifting cars, flipping giant tires and lifting 152 kilograms over his head. Walls has sent these videos to the athletes for inspiration.

“The thing I liked about the strongman competitions was you could put your body in certain positions where I didn’t irritate my shoulder,” said Walls.

Walls competed in the heavyweight division in 2006 at the Neogenix strongman competition and in 2007 at the New Liskeard Strongman Competition. He placed third in each event.

Walls worked with provincial level athletes as a trainer at Fits Toronto and the Toronto Athletic Club.

From 2010 to 2012, Walls taught at Humber College. During his time there he found the Ryerson job advertisement.

Prior to joining Ryerson, however, Walls proved that he still has what it takes to compete, by qualifying for the Ontario senior championships.

He came highly recommended from the CSCS training centre when Joseph and the hiring staff were looking for a new strength and conditioning coach. 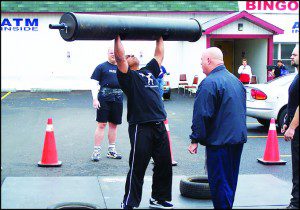 “His technical knowledge, his real scientific approach; I think that won the day for him,” Joseph said, describing the interview.

Those who have gotten to know him in his three years at Ryerson say he is a shy, honest man.

“His size is obvious when he walks in the door,” says Joseph. “He’s an imposing fellow, he is a thick barrel-chested man.

“Clearly he’s a guy who practises his craft. What was really interesting was that size was juxtaposed to his quiet nature. He’s a quiet, shy, almost to the point of introvert, very soft spoken.”

No matter whom you ask, athlete or coach, Walls will be described similarly.

Joseph praises him for his approach.

“He’s not a yeller, he’s not a screamer, he’s not in your face, he’s not here to shame you. He’s here to make you better,” Joseph said.

“He’ll go out of his way to provide assistance. I think whenever you lead with a caring heart, people want to respond to you and I think its Sam’s kindness that leads the way.”

Although Walls is quiet, he is never afraid to yell in the weight room. When he does they are always words of encouragement.

“I get a tremendous amount of enjoyment when I end up seeing that they succeed, not only in sport, but also through strength and conditioning and their commitment to the team,” Walls said.

Some of that success is shown through the yearly fitness testing.

At 8 a.m. the women’s volleyball team arrives in the gym and lines up across the baseline. The beep test recording begins. “Starting level 1.1” the robotic voice echoes across the gym as the team begins to run baseline to baseline.

Each beep sends them across the floor again, faster each time. Walls, standing on the sideline, gives motivation to push them. “You’ve got this, ladies. Keep going, this is easy.” Some players can’t keep up and stop running.

“Level 10.1,” the robotic voice goes again. The remaining runners have made it to the expected level. Walls tries to keep pushing them in hopes they’ll improve their personal-best scores. 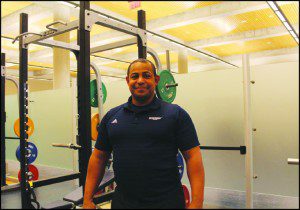 Walls at the Mattamy Athletic Centre, where he works as strength and conditioning co-ordinator. (Melissa Wronzberg/Ryersonian Staff)

The beep test is important because it measures aerobic capacity as well as mental toughness. Other tests assess acceleration, vertical jump and upper body strength.

In the three years that Walls has been at Ryerson scores have improved. He’s been a big part in helping the development of Ryerson athletics. His work never goes unrecognized.

“I think among Sam’s greatest contributions to our program have been the time he spends on the planning side,” said Dustin Reid, head coach of the women’s volleyball team.

“Creating individualized programs, getting to know the athletes and what their skills sets are within volleyball.”

Reid also talked about Walls’s approach to training. “I think that he doesn’t try to coach the athletes in a way that he once trained.

“He’s trying to coach them in a way that makes them the best players they can be. That’s what makes Sam special,” said Reid.

Walls’s number one goal is preventing injuries. Improvement comes second. According to coaches and statistics, Walls reaches both goals.

Joseph had a meeting with Ryerson’s head athletic therapist, Jerome Camacho, to discuss the fact that there are fewer injuries this year than last. The two believe that this was because of Walls.

Joseph recalls six years ago when the men’s basketball team played against the Carleton Ravens, the top team in the country. He compared what the Rams players looked like versus the Ravens.

“(Our team) just (looked) dangly and all collarbone and shoulder blades. And you look at Carleton and they were biceps and triceps; they were deltoids,” said Joseph, laughing at the memory.

“Those guys looked like men and we looked like boys. And you fast forward five years and my goodness our boys on that basketball team are men now. And you can see the evidence not just in our men’s team but in our women’s teams as well.”

Walls says he believes the athletes impact him as much as he does them.

“My favourite part of working here is 100 per cent working with the athletes,” said Walls. “I find that they teach me as much as I teach them.”

Walls’s impact on the athletes’ performances is one thing, but his impact as a person and inspiration seems to be what continues to push Ryerson athletes to new levels.

“We’re really lucky to have him,” said Nicholishen, “I love him. I love Sam.” 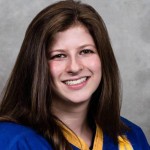