Sam Cash swears he’ll be back to school in January.

The 21-year-old arts and contemporary studies student put his studies on pause this semester to dedicate time to his band Sam Cash & The Romantic Dogs.

And for good reason. Cash’s recent performance at the Canada’s Walk of Fame Festival and finishing as a finalist at the inaugural RBC Emerging Artist Mentorship Prize (he won $1000) is perhaps an indication of his future place in Canadian culture.

“It’s great that Canada’s Walk of Fame is trying to give up-and-coming artists a shot at some cool things,” says Cash, a Toronto native.

Hitting the stage at the ceremony on Saturday followed a string of high-profile performances for the band, including opening sets for Canadian musicians Sam Roberts and Lights.

It’s the beginning of great things — and packed schedules — for Sam Cash & The Romantic Dogs, who just released their debut album Stand Together, Fall Together last week. With so much going on, Cash is thankful that Ryerson is on the backburner for now.

“Putting this record out is a really exciting time, but if I was in school right now I would be so freaked out,” he says, recalling his last three years balancing gigs and English essays.

“I found when I was in school I had to shut off the music business part, the goals and the ambitions of all that. It was unfair to both of those things, because I couldn’t do either 100 per cent.”

Still, he tried to. Cash remembers a weekly gig during Ryerson exam season that required some overlap between his studies and his passion. He would opt for a bar stool over a library cubicle out of necessity.

“I remember showing up to the bar, starting to write this essay, sound checking and playing the gig, and then staying at the bar until 2:30 a.m. All of my friends were around partying and I was just writing this essay, drinking some beer,” he laughs.

But it worked for Cash. “Beer helps. Wine is good sometimes for writing essays too.”

When he’s back to campus in January, he’ll have to find a way to balance it all again. But for now, Cash and band-mates Aaron Comeau, Matt Bailey and Kyle Sullivan are going full force with their craft.

Now with their album release and Canada’s Walk of Fame under their belts, they’re preparing to open for Hannah Georgas, including a Toronto show at The Great Hall on Nov. 2.

In terms of finding a work and school balance come winter, Cash says he can count on the music to ease his stress.

“When you’re playing a gig, it all goes away.”

This story was first published in The Ryersonian, a weekly newspaper produced by the Ryerson School of Journalism, on September 25, 2013 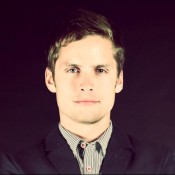 GOALS GALORE: Rams on the ball!