Sam the Record Man will light up the city again

The famous Sam the Record Man sign will return by the end of the year if everything goes as planned. 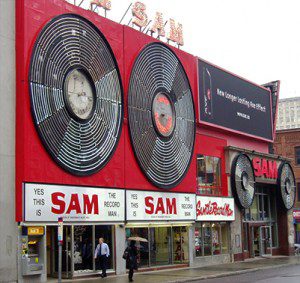 Sunset Neon is the company tasked with rebuilding the sign. Account manager Tony Bianchi said they hit a few obstacles along the way.

“It’s going on the roof of a building that really wasn’t designed to hold a structure like this and there’s a lot of wind load, it’s like two big sails,” said Bianchi.

They had to ensure the sign passed wind tunnel studies to determine what load the building could take, he added.

While much of the sign had to be replaced, they were able to salvage some old parts.

“A lot of it is being built new, but there’s a lot of components that we’ve salvaged from the old sign,” Bianchi said.

The company could only reuse parts that were in working condition.

“It’s going to pretty much look like the signs that were taken off the old building.”

As for when Torontonians can expect to see it up and running, that remains a mystery.

Bianchi said he hopes the sign will be installed by end of October, but expects it will be another two to three weeks before it’s ready to be lit.

In an email, Dasha Pasiy, Ryerson’s media relations officer, stated that the school is planning on hosting a lighting ceremony, but the details are still being worked out.

The new and improved sign will sit atop 277 Victoria St., facing Yonge-Dundas Square.

The sign was removed from the Yonge Street record shop in 2008 when Ryerson began construction on the Student Learning Centre which stands in its place. Ryerson had initially planned to put it on the new building but decided it clashed and tried to get out of the agreement to preserve the sign. Nearly a decade later, the sign is being prepared to shine on Torontonians again.

There’s a big difference in building a sign to mount on the exterior wall of a building just above street level and rebuilding it to be mounted without a building to back it on a rooftop a dozen stories or more above street level. The exposure to high gusts of wind means that there is a risk that the neon tubing could be wrenched from its socket so I suspect some modifications are in order for safety reasons. Frankly, I would rather have the sign mounted on the roof of the former Hakim Optical building because it is much lower and closer to the original elevation of the sign but the city does not own that building. Mounting one of the records over Gould Street would have been a better idea but Ryerson did not want anything to compete with the facade of their student center.