In the play, Hamlet — a young student — is filled with questions about the world and is ready to challenge the status quo. Hamlet questions everything from authority to one’s life purpose and receives little to no answers, Pasyk explains. With Hamlet being Shakespeare’s most experimental work, it was interesting to see how Pasyk was able to modernize this revenge thriller/philosophical drama/love story, and how the four actresses, along with the supporting cast, were able to powerfully execute the story of Hamlet.

To begin, the four Hamlets uniquely embodied the various stages of the Shakespearean character’s life, each actor making Hamlet their own individual character. The performers seamlessly interchanged the role of Hamlet with one another, and in every transition the chemistry with the other characters surprisingly stayed the same. This was shown especially with Hamlet’s love interest, Ophelia, who was played by Reiley-Day Hodgson.

Though having a same-sex couple wasn’t a major plot point in the story, this minor change made a refreshing and progressive difference by highlighting the LGBTQ community in a way which the classic Shakespearen play never did.

Each person in the fourth-year acting class captured the essence of their character in their own way, and stand-out performances were delivered by Gertrude (Isabelle Nagel) and Polonia (Sarah Gervais). However, Polonia’s death in Pasyk’s story was rather anticlimactic in comparison to the dramatic scene in the original play, where a sword was used instead of a gun.

This depiction of the tale also included modern references: a smartphone cleverly used to pull the story together; a cringing moment involving vaping that represented its popular usage among Canadians; and a stellar tech design created by the production team, which made the choice of a thrust stage in this story a tad bit more bearable — but still a feature I had some gripes with.

Thrust stages are extended into the audience on three sides and connect the backstage area by its upstage end. The makeshift thrust stage was a brave directorial choice and made sense for this performance due to the fact that an important scene in Hamlet uses the “play within a play” literary device.

Unfortunately, the stage made it very difficult to enjoy the performance at times and the character blocking added to it as well. Depending on which side a person was seated on, it may have been hard to hear what a character was saying. And because I wasn’t sitting upstage, all I could hear out of most actors were the muffled sounds of their lines from their back, which faced me.

However, as mentioned before, the stage allowed for amazing technical moments, such as the projected starry night scene and the hologram ghost of Hamlet’s father. It also allowed the audience to feel like they were characters in the play during Mousetrap, the metaplay Hamlet puts on to get a reaction from Claudius (Deivan Steele) and Gertrude.

In the end, it was a risky move made by Pasyk and the production team; however, I would say overall it paid off. 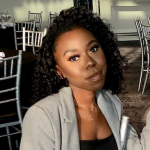