By: Melissa Bennardo and Ben Shelley 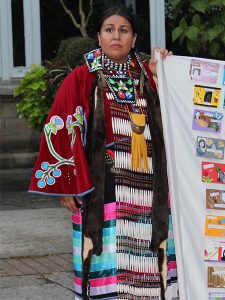 Angela Boyer stands holding a banner with the names of murdered and missing Indigenous women in honour of the Sisters in Spirit Vigil on Oct. 4, 2017 (Photo by Alexis Perikleous)

Allan Gardens was home to the annual Sisters in Spirit vigil to honour the lives of missing and murdered Indigenous women and girls on Wednesday night.

The vigil was organized by the Native Women’s Resource Centre of Toronto and is one of many vigils held across Canada on Oct. 4.

McKenna has attended the annual vigil for the past few years and said she wants to see more priority put on the victims families instead of protecting the police or governmental structures.

“Indigenous women are still going missing at high rates, and it’s important to remember the people that we lost and to try and prevent it [from] happening to other women,” she said.

According to a RCMP report published in 2014, there were 1,181 missing and murdered Indigenous women and girls in Canada. As a result, the first vigil was held in 2006.

David Martin, an attendee who lives in Toronto and is from the Six Nations of the Grand River territory, said that the vigil helps people feel like they’re not alone. Martin added that he believes there still isn’t enough awareness, and the people who usually attend the vigils are already sympathetic and understand the issue.

“It helps build awareness to anybody else who happens to be walking by that this situation is ongoing,” Martin said. “It’s still happening today and it helps people find a place to build and ask questions about this and become curious about what’s happening.”

Those with Indigenous backgrounds weren’t the only people in attendance. Lyndi Woo, who works in Indigenous community development, said she came to the vigil to support her Indigenous sisters, friends and colleagues.

“As a non-Indigenous woman I got to show support for them and try to stand in solidarity,” Woo said. 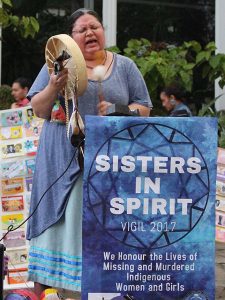 Brenda Macintyre, also knowns as the Medicine Song Woman, sings a song in honour of her murdered and missing sisters on Oct. 4, 2017 (Photo by Alexis Perikleous)

Sarah Dennis-Kooji, an executive member of the Indigenous Students’ Association at Ryerson, said she wants to see more awareness focusing on the ways in which Indigenous women are resilient.

“We still survive and thrive in a society that doesn’t really care about whether we’re alive or dead,” Dennis-Kooji said. “We care, and I feel like that’s something that speaks to how strong we are when you compare that to the forces against us.”

Indigenous community members stood holding banners to honour the missing and murdered Indigenous women. Despite the rain, the vigil went on as attendees listened to songs and watched traditional jingle dancing. The vigil ended with a travelling song as community members and attendees walked out of Allan Gardens together.