It’s that time of year again. Thousands of moustache-growing “Mo Bros” from across the world unite and ditch the razor for 30 days in what has become widely embraced as Movember.

The intention is to help “change the face of men’s health” by signing up with the Movember Foundation and using their fuzzy upper lips to raise awareness and funds for prostate cancer, testicular cancer and men’s mental health.

But for one Ryerson student who is growing his ‘stache for the second year, collecting money for Movember is not at the top of his priority list. Hamid Shihabdeen, a second-year business student, believes that he’s doing his part just by using his mo to start conversations with other guys about their health.

“I am more of a reserved person that would rather support the cause by raising awareness in a fun way,” Shihabdeen says, pointing out that he also promotes Movember by posting pictures of his mustache with the hashtags #Movember #Charity and #MensHealth on Facebook and Instagram. “I hope to educate people on the reasons behind participating in Movember, so that they can tell others what it’s about and how they can help.”

Some people would say that Shihabdeen is a “slacktivist,” a word that’s negatively used. It combines the words “slacker” and “activist” together to describe someone who doesn’t participate meaningfully in a cause.

Slacktivism can include anything from signing a petition to hashtagging a trending topic to show your support of a campaign. While Shihabdeen doesn’t see himself as a slacktivist, the topic is part of a bigger discussion about what’s considered true activism, and the effectiveness of campaigns that try to engage the public with outward displays of support.

There is a growing concern that slacktivists, who claim to raise awareness for Movember by simply sporting a moustache or uploading pictures of their daily progress onto Instagram, do more to boost their own public image or take part in the Movember trend, than help the foundation with the hands-on participation and financial contributions it really needs to carry out its goals successfully.

Last November, the debate around slacktivism re-emerged after a study from the University of British Columbia (UBC) found that consumers were less likely to donate money to organizations that allowed them to use public tokens (like wearing a pin or joining a Facebook group) to show their support.

The study suggested that publically showing support for a charitable cause only satisfies our desire to be seen positively by others, and doesn’t usually motivate any further support for the cause after the initial display.

“Awareness is certainly a benefit, and the more token support provided, the more other consumers are exposed to the cause. However, if the goal is to generate donations, and research suggests that it is, we find that token support is not as effective,” says Kirk Kristofferson, co-author of the study.

But for the Movember Foundation, the mustache is more than just a symbol people associate with Movember, it’s what originally motivated the movement.

The idea for Movember came in 2003, when the Australian co-founders Travis Garone and Luke Slattery were jokingly talking about bringing back the moustache and challenged 30 friends to grow a ‘stache. The task quickly became a campaign about men’s health and prostate cancer, inspired by a friend’s mother who was fundraising for breast cancer at the time. The guys each paid $10 to participate, and became so enthusiastic about the cause that they registered the grassroots organization the following year.

Today, Movember has become something of a cultural phenomenon with over four million participants in 21 countries who have collectively raised more than US$559 million for various men’s health initiatives. Part of the goal of Movember is to use the moustache as a catalyst for men to learn more about their health and to seek help when it’s needed. But the Movember Foundation – being the largest non-governmental investor in men’s health programs in the world – also relies on donations to fund more than 800 of its programs.

That’s why the organization makes it clear that while growing a ‘stache for the month is a fun way to do some good, Mo Bros are expected to take action.

When participants go to sign up on movember.ca, they are told that Movember is “more than an excuse to grow a fine piece of moustachery, it’s about creating conversations while raising funds and awareness for men’s health.”

According to Jo Anne Stayner, a spokesperson for Movember Canada, nothing about being a Mo Bro or Mo Sista involves slacking. “Mo Bros are asked to grow a moustache for 30 days, which is not a small task for some people.

While they are generating a lot of conversations, they are also conducting their lives in school, business and family functions,” Stayner says. “Many Mo Bros and Sistas also lead teams, organize events, do bake sales, make creative videos – you name it – and often several times over a 30 day period.”

Despite the emphasis non-profit organizations place on meaningful participation in their causes, many are blaming social media for the rise of slacktivism.

Kristofferson of the UBC is one of those people. He thinks that social media only increases the occurrence of slacktivism, given how easy and observable charitable displays of support are shared through platforms like Facebook and Twitter.

Recently though, there seems to be a growing anti-slacktivism movement set on changing this laid back approach to charity. After campaigns like KONY 2012, #BringBackOurGirls and the ALS ice bucket challenge received criticism for generating slacktivism, other campaigns like UNICEF Sweden’s “Likes Don’t Save Lives,” send a clear message that it’s financial contributions and not mere awareness, that make a difference. Similar attempts like the “F Slacktivism” Facebook page, and the #AntiSlacktivism Twitter hashtag have tried to rally support in favor of true activism.

But according to Anatoliy Gruzd, the director of the Social Media Lab at Ryerson, social media has helped non-profit organizations like Movember with their campaigns.

He explains that social networks offer a cheap resource for low-income organizations, and the connectedness of the online community allows more people to participate and promote causes by simply sharing information with their friends and followers. For Gruzd, he doesn’t see it as a bad thing.

“I wouldn’t necessarily call it slacktivism,” he says. “Activities such as sharing and watching content online may not be as similar to running out and collecting money on the street, but they are contributing to the increasing visibility of the campaign. That’s the real benefit.”

Gruzd notes that there are also studies – like the one conducted in 2011 by the Centre for Social Impact Communication – that suggest that participants that utilize social media to promote a cause, are more likely to participate more meaningfully in the future. In this way, Gruzd suggests that it really depends on the nature of the individual when it comes to whether they decide to fully participate or not.

Still, the Millennials – who are often seen as connected to technology and engaged in social media – get a bad rap for being some of the biggest slacktivists. Despite this belief, the student-based Big Mo on Campus last year was the largest Movember network globally. Over 28,500 students participated and raised over $2.8 million.

Troy Murray, the sponsorship and fundraising officer of student affairs at Ryerson, believes slacktivism isn’t a problem among students. He says that when he was still in school, the Movember campaign helped spark his interest in philanthropy, motivating him to raise more money for men’s health every year. But Murray does think it’s harder for students to contribute time and money to charitable causes.

“It’s difficult to ask students who are struggling with heavy workloads and thin bank accounts to raise funds. I don’t think that’s the primary goal,” he says. “(Students) are doing their part by raising awareness for Movember (and) it’s a great way to create a culture of giving, whether they give a little or a lot.”

Murray attributes the success of Movember with the younger generation to effective brand messaging. He says that Movember has done a great job in creating a brand with a fun personality that people want to engage with.

Above all, while the Movember Foundation acknowledges that growing a funky moustache for the month is meant to be a fun way to help the cause, it can use all the money it can get to help fund its various men’s health initiatives around the world.

As for Hamid Shihabdeen, he says he’s in it for more than just the fun of it and he tells the people who think he’s a slacktivist that they’re wrong. He believes just raising awareness by growing his ‘stache really helps to support the cause.

Shihabdeen points to the ALS ice bucket challenge that took the Internet by storm last summer. With thousands of people posting their videos through social media, over $100 million was raised to help people with Lou Gehrig’s disease. He notes that this campaign was successful, largely due to how awareness was raised. He suggests it’s the same concept with Movember.

“The appeal of Movember is growing a moustache and telling people why I’m participating in it,” he says. “Wearing my moustache, taking a picture of it and posting it online is another great way to support the cause.”

But if he’s pushed to answer why he doesn’t take that extra step and raise funds, he’ll tell you that it’s just not possible for him at this busy time in the school year.

“I feel like if I had a lot of money, I would definitely help out and donate a large sum,” Shihabdeen says. “This is the best I can do for now.”

Ryerson staff and students showing off their Movember ‘staches: 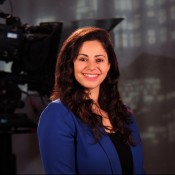 Alexis graduated from the Ryerson School of Journalism in 2015.

Alexis graduated from the Ryerson School of Journalism in 2015. Follow: @AlexisNews4U

RyersonianTV: Vaping, Katy Perry to perform at half-time, police gets hacked, and the world’s largest coaster!