This version includes confirmation of the existence of the email, attempts to contact instructor Kelly Train and union president Joseph Zboralski, and a TV package.

A Ryerson sociology instructor has come under fire for allegedly telling a student she wouldn’t be allowed to write an essay arguing that the gender wage gap is a myth.

According to online blogs like the Libertarian Republic, which have been circulating the story, the instructor allegedly told the student in an email that her “myth” premise is wrong and that she could instead write an essay on the glass ceiling.

The instructor, Kelly Train, is then alleged to have told the student, Jane Mathias, that she shouldn’t rely on the business sources she proposed using, but rather turn to “feminist sources.” Train wrote that business sources “blame women,” according to the online reports. Jane is in her fourth year at Ryerson studying business and marketing. She’s taking this sociology course as one of her electives.

Mathias’ twin sister, Josephine, is a fourth-year political science student at the University of Toronto and operates a YouTube channel under “MyNameIsJosephine.” She criticized the assignment and Train’s reasoning.

“[T]he professor’s disregard of basically every form of evidence…forces her students to conclude that, of course, the wage gap is real…that’s called brainwashing,” says Mathias in her YouTube video titled, “The Reality is Patriarchy: Indoctrination at Ryerson University.”

According to a screenshot of the email posted on Twitter by Josephine, Train went on to state that her sister would not find any sources denying the wage gap’s existence before stating that the wage gap operates through the glass ceiling. 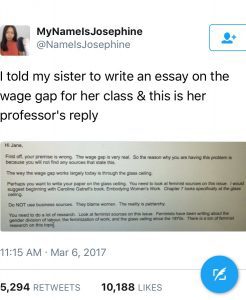 Josephine Mathias’ tweet of a screenshot of the email sent to her sister by Ryerson instructor Kelly Train.

“Perhaps you want to write your paper on the glass ceiling,” wrote Train. “You need to look at feminist sources on this issue. I would suggest beginning with Caroline Gatrell’s book, Embodying Women’s Work. Chapter 7 looks specifically at the glass ceiling.”

“Do NOT use business sources. They blame women. The reality is patriarchy,” the instructor wrote.

Train didn’t respond to a request to comment by the Ryersonian. Both sisters declined to comment as well.

The Ryersonian has confirmed the existence of the email sent by Train to Jane.

Check out our TV package on the story, done by Jennifer Ferreira and Abigail Murta:

This package appeared in the Ryersonian TV newscast that aired March 16, 2017.

Rams look ahead to semifinal showdown versus Dalhousie

how did this goof become an instructor

What a complete dingbat! Where does she get off directing her students as to which conclusions to arrive they should arrive? She deserves to be tarred and feathered.

What a complete dingbat! Where does she get off directing her students as to which conclusions they should arrive? She deserves to be tarred and feathered.

Ryerson, the second tier University you go to when you can’t get into UofT.

No wonder this delusional woman was hired as a professor. Absolutely pathetic to use your teaching position in a university to shove your personal politics down young peoples throats.
And to lack critical thought to such a degree as to appeal to ‘feminist youtube’ as an authority?

Why is this allowed?
Fire this worthless prof

I went to a religious school as a kid and even in that strict environment we had the freedom to write as we chose as long as we could back it up with facts. Groupthink will tear down the West