By Luke Bellus and Max Ciarmela

The forward sized up her opponent and went to work. A spin followed by a fadeaway and Paska’s shot was good.

She is now the sixth female athlete in Ryerson’s program to record 1,000 career points. 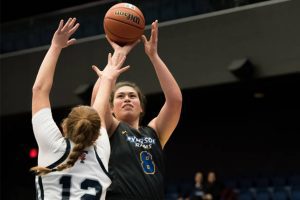 Coming off of a career high of 29 points in the previous game against the Laurier Golden Hawks, Paska finished Wednesday’s match with 23 points and 10 rebounds, leading the Rams to a 71-63 victory.

She currently sits in sixth on the Rams women’s all-time leading scorers with 1,019 points.

“It feels great. I feel honoured. All of my hard work in these four years has paid off,” said Paska.

“I didn’t even realize I was close to 1,000 points until one of my friends told me. But I just knew that if I kept working hard things would fall into place. I even surprised myself.”

Paska reached the thousand mark in her 66th regular season game with the Rams, averaging 19.8 points per game. She has been a key contributor for the Rams since her first year with the team.

In 2015, Paska was named to the OUA All-Rookie Team and won Ryerson’s RSU Female Rookie of the Year award.

Carly Clarke has been coaching Paska throughout her time at Ryerson.

“Obviously she is a really unique player.  Being 6’4” with her skill set and her basketball IQ is a really special combination,” said Clarke, the head coach of the Ryerson women’s basketball team. “She’s demonstrated both of those things from the start of her time here.”

With Paska leading the team this year in points and rebounds per game, Clarke has noticed one part of Paska’s game that sets her apart.

“She’s willing to share the ball. I think that’s most important. Her skill set and her talent draws double teams, triple teams and gets teammates open, and she’s willing to pass it and share it.”

Aside from her numbers on the court, Paska’s hard work off the court doesn’t go unnoticed.

Both Carly Clarke and Rams forward Katherine Follis said she is, “one of the hardest working people (they) know.”

“She will come to the gym Saturday, Sunday morning, at 7 a.m. just to get some extra reps in, go in the weight room, work on her fitness, work on her cardio, make sure she is not lagging behind in anything,” said Follis.

Paska and Follis have been teammates since they were in high school, playing on the same rep team.

“I think she has grown tremendously as a person. Not many people would know, but she is super shy and not very outgoing with strangers and other people.”

Follis said she has seen Paska’s growth both on and off the court.

“Being more social, talking to more people, being more comfortable with herself as a person as well as herself as a basketball player.”

Since Paska arrived at Ryerson, success has followed. Paska played a big role on the teams that won the program’s first OUA Championship and placed second at CIS Nationals in 2015.

“We have had three and hopefully going on four of our best seasons ever here at Ryerson, in terms of wins and losses,” said Clarke. “I think it has attracted other good players to want to come play with her and be a part of our program and what we have built here.”

The all-time leader for points is Ashley MacDonald with 1,218 points, and in fifth, just before Paska, is Lisa Goldring with 1,038 points.

The women’s basketball team have 14 conference games left to play this season.

Our President Is Black