This version was updated to include a TV package that aired on RyersonianTV’s March 30, 2017 newscast.

“‘So, Ms. Plumley … do you think it was sexual assault?’ I pause and a million things come to my head.”

“‘I don’t know,’ I respond. I’ve asked myself that same question many times and I just don’t know.”

This was part of the prepared speech that contributed to Christa Plumley’s victory at Ryerson’s sixth annual Next Top Speaker competition that took place at the Sears Atrium Friday evening. It’s the university’s largest annual public speaking event. 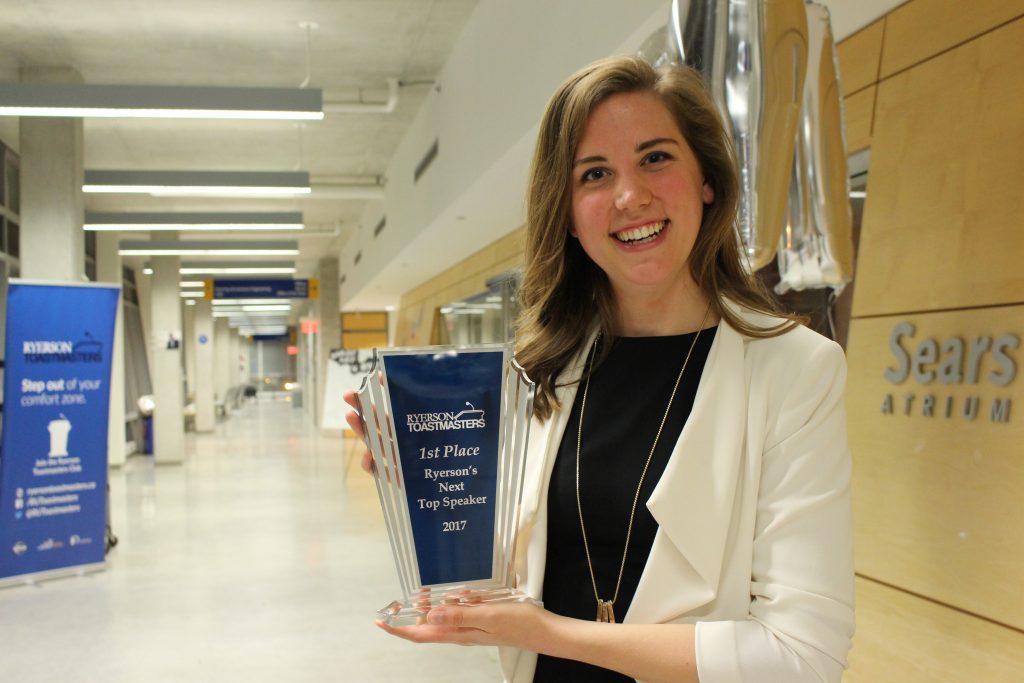 “To me, (sexual assault) is such an important topic. I find that it is something that affects so many, either big or small, whether it’s someone that you know that was sexually assaulted or you personally have been sexually assaulted,” says Plumley on why she chose to write her speech on the topic. “I wanted to address that and share my stories in hopes of inspiring others to come forward with their story as well.”

Plumley was one of eight students speaking in this year’s competition hosted by the Ryerson Toastmasters, one of over 15,000 Toastmasters clubs around the world focused on helping others develop public speaking and communication skills. Topics ranged from sexual assault to struggles with losing weight.

The event began with prepared speeches by each of the eight contestants. After, they gave short impromptu speeches. The judges then chose their top three, judging vocal variety, projection and body language.

Once the top three were selected, they each gave two to three-minute speeches, after which the judges chose the winner.

Despite the range of topics, each year has a single theme. This year, it was parallels — the idea that there are parallel realities running side-by-side at the same time with the notion of “what if?”

“What if I could remove all the roadblocks, constraints and impediments in my life? … What if, in my life, I never made excuses? Understanding that these parallel realities or these segments of yourself can actually be manifested into the present — that’s what we mean by parallels,” explains Armaan Verma, fourth-year business management student and president of the Ryerson Toastmasters.

Verma was the event’s MC. This was also his second year as a speaker’s coach for the competition, a role he took on with Allie Zheng, vice-president of education for the Toastmasters.

But before both could train any of the competitors, auditions were held. Over 50 students auditioned after the call was put out in November. Verma says this is a 20 per cent increase from last year. 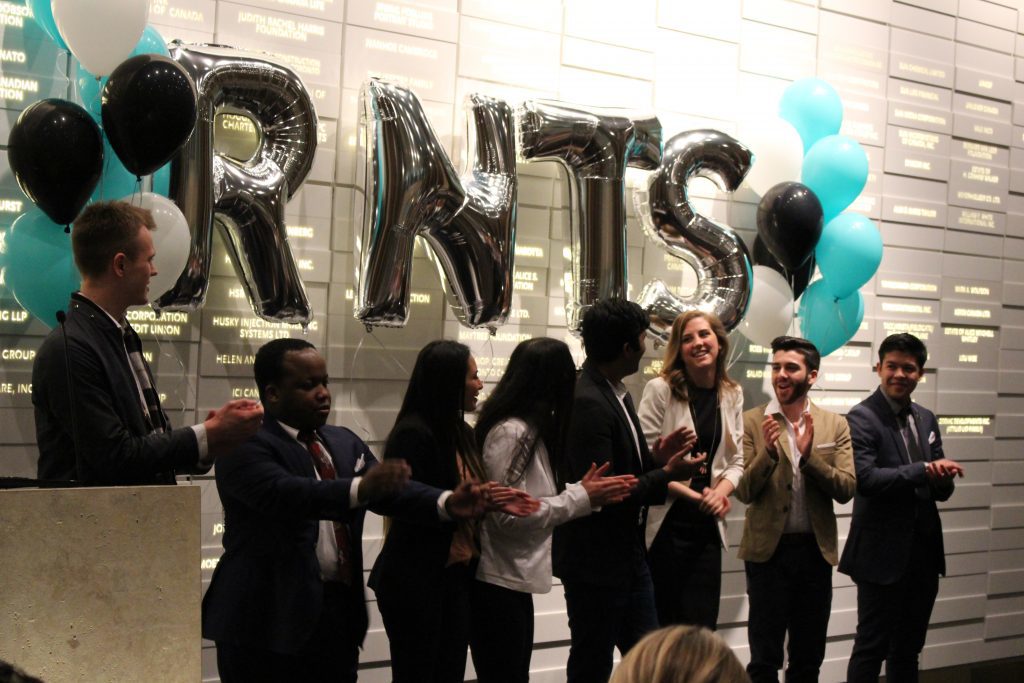 The other finalists congratulate Christa Plumley on her first place win in Ryerson’s Next Top Speaker competition. (Sarah Jackson/Ryersonian Staff)

Students from across all faculties were able to audition, despite the competition’s strong affiliation with the Ted Rogers School of Management. This inclusion is something fourth-year human resources major and event co-ordinator Vini Lad says only makes sense.

“At the end of the day, it’s a competition, so it’s only fair to have representatives from each school.”

It was after a round of video auditions and a subsequent round of in-person auditions that the top eight were selected and underwent training in various workshops for two months prior to the event. Workshops focused on everything from helping students structure essays to the proper use of hand gestures.

“Ryerson’s Next Top Speaker isn’t really about a formal communication process, it’s storytelling,” says Verma. “These top eight individuals have their own unique story related back to the theme this year and only these eight people can deliver that one speech that they wrote for that one purpose.”

For one speaker, however, the competition meant much more than this. Third-year RTA student Mikael Melo used his speech to address some of the more difficult times in his life, like the house fire he and his family experienced. 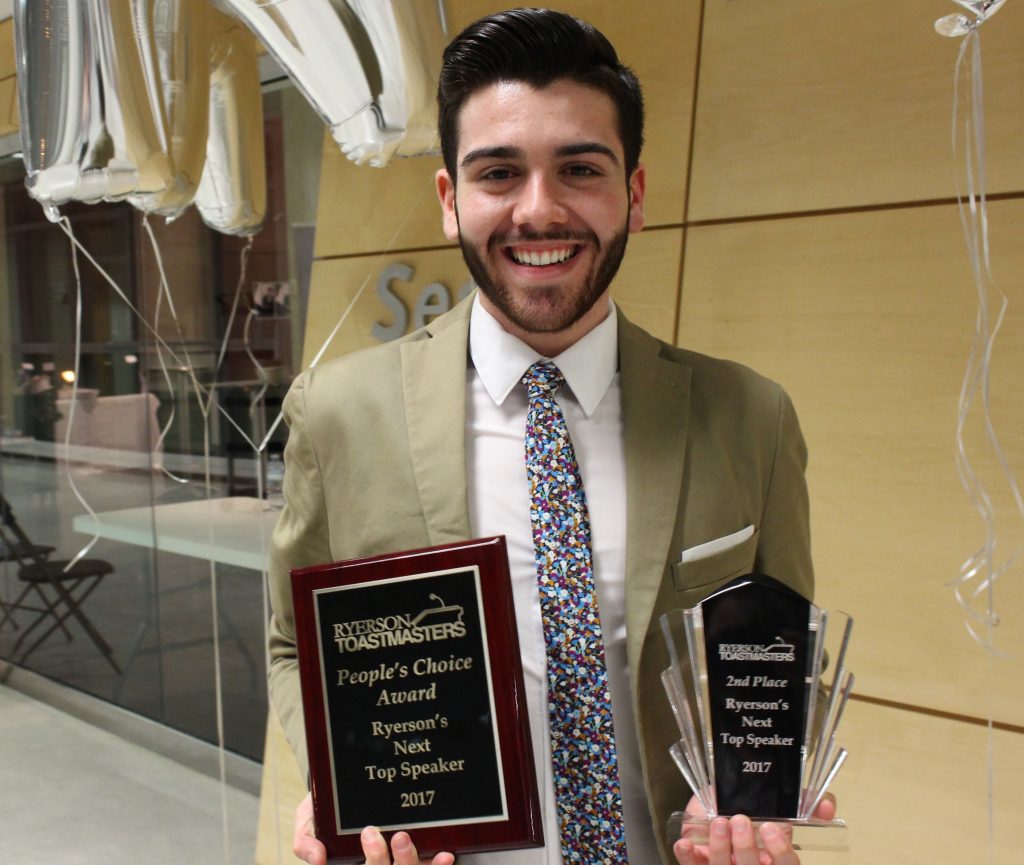 “Over the course of this last year, so much has happened and [with this speech, I was] trying to find the perfect way to tie all of those experiences together [while] still representing me,” says Melo. “If I didn’t share my story, I might be internalizing a lot of feelings still, and I’m glad that I put it out there and now I can confidently talk about it and be OK with what happened.”

His speeches won him second place in the competition, as well as People’s Choice Award, an especially significant victory for him.

“There’s no words to describe how happy and honoured I feel about that,” says Melo about the award. “It was amazing to see so many people … who were really receptive to my jokes or just even in the moment of my speech where I started to cry a little bit. It was outstanding to see so many audience members there with me, feeling that emotion.”

Check out our TV package on the story, done by Jennifer Ferreira and Sarah Jackson: 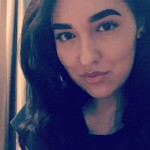