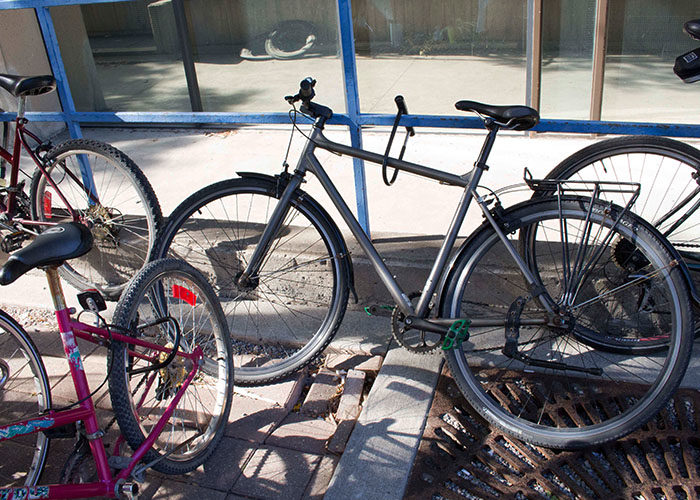 Last year’s data on bike thefts on campus may mean Ryerson cyclists have more to worry about than bad weather and angry drivers.

During the last academic year, 42 bicycles were reported stolen on campus, according to Ryerson’s security, known as Integrated Risk Management (IRM). That’s more than double the number of thefts reported the previous year.

Despite the visibility of most bike racks, the presence of campus security and 24-hour CCTV cameras, there’s little hope of recovery for victims of bicycle theft.

“I went to security and they said, ‘There’s nothing we can do about it,’” said Katy McNabb, a fourth-year interior design student whose bike was stolen from the racks outside of Balzac’s two years ago and never found.

When McNabb reported the theft to Toronto Police Services (TPS), she said she felt like the focus was on what type of lock she had, not that her bike had been stolen. “I never thought anyone would ever steal my bike, ever, coming from a small town … We never locked our front door, let alone our bikes,” she said.

When a theft is reported, IRM’s policy is to conduct an investigation of the area and go through “safety planning” with the victim, which includes helping the victim report the theft to the police, if they choose to.

IRM’s website has suggestions on how to avoid bike theft, but none of them are guaranteed. Suggestions include using “a good quality lock,” and choosing “a good location.” Bicycle locking options on campus include outdoor parking in public areas. There’s also an indoor, OneCard-secure bike room with 57 spots, for which permits are distributed on a first-come basis to students, faculty and staff at the beginning of each semester

Veronica Georgieva, a third-year performance production student, whose bike was stolen from the quad in broad daylight last fall, didn’t bother reporting the theft. “I didn’t really think there was anything I could do, because once it’s gone, it’s gone,” said Georgieva. “I just knew that no matter what I did, I wouldn’t have my bike anymore.”

Tanya Poppleton, manager of security and emergency services, says Ryerson has plans to improve bicycle accommodations. Poppleton says that in order for the university and security staff to know where the high-risk areas are, it is important for victims to always report thefts to security.

One suggestion from IRM and Toronto police is that cyclists register their bikes’ serial number with TPS’s bicycle registry. This increases chances of a bicycle being linked back to its owner if it’s found.

Despite last year’s surge in bike thefts, early numbers from this year are positive. Six thefts have been reported this month so far, compared to 15 last September.