Ryerson will be getting a state-of-the-art broadcasting centre in the Mattamy Athletic Centre (MAC), courtesy of Sportsnet.

The Rogers-owned Canadian company, which includes TV channels, radio stations and a magazine,  has donated $750,000 to Ryerson’s Make Your Mark campaign.

The money will fund the broadcast facility, which will be a part of the new RTA School of Media’s Sports Media program.

“We are deeply committed to providing opportunities in education for youth and young adults, particularly when it comes to technology, innovation and the future of sports media in Canada,” said Scott Moore, president of Sportsnet and a Ryerson graduate.

The four-year program, which differs from the core RTA program of media production, will be housed in the MAC. Students will have the opportunity to work on covering sports, doing sports feature documentaries and sports feature interviews, among other things.

Charles Falzon, chair of the RTA School of Media, said that the program has been in development for the last few years, but talks with Moore were a very recent development.

“It’s also significant in that Sportsnet is one of Canada’s leading sports networks,” Falzon said. “The fact that they are saying ‘yes, we believe in this sports media program,’ even before it’s started, has been a real boost to all of us who are working on it and I know will make the first round of students very proud that they are associated.”

The program will launch in September, and will accept only 60 applicants in the first year.

“It came to be primarily because so many of our graduates are in the sport industry,” Falzon said. “Sport media industry is a growing field and we felt that there would be a demand and an opportunity to create leaders of tomorrow.”

Students will work on covering the games held at the MAC across various media platforms, with an emphasis on television. Students will also use radio and digital media. In addition to its production component, students will learn about sports theory, sports management and sports marketing.

As part of the new partnership between Sportsnet and Ryerson, the RTA School of Media plans to broadcast a regular television series featuring university sports from across the country.

Students from the program will produce the content, and up to four hours of coverage will be featured on Sportsnet 360, one of the company’s national TV channels, each year.

“The program seemed to mix my love for sports and my passion for production perfectly,” says Alex Daddese, a successful applicant to the first year of the program. “Everyone in the program will get to gain experience in the area they wish to enter.”

The studio will be on the fourth floor of the MAC and the control room will be built over the summer.  It will feature half a dozen high-end cameras, audio and lighting equipment.

As for Falzon, he says he is very optimistic for what this means for the Ryerson community as a whole. 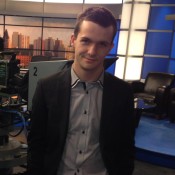