Ryerson’s next cohort of graduating students will celebrate their convocation at the Mattamy Athletic Centre (MAC) for the first time.

The Awards and Ceremonials Committee (AWCC) announced the move from the Ryerson Theatre at the Nov. 7 senate meeting. Kim McDonald, director of convocation and awards, said the ceremonials office was notified of the possibility earlier in the year.

The Ryersonian previously reported the summer-long closure of the Kerr Hall quad might affect convocation.

Ryerson’s next convocation will be held on home ice at the Mattamy Athletic Centre. The third floor of the MAC is also home to Ryerson’s men’s and women’s hockey teams and fits 2,500 people with bowl seating and ice surface seating combined. (Photo by Luke Bellus)

To get into the Ryerson Theatre, graduates walked in a procession through the quad. After the ceremony, the quad was also used as a space for graduates to greet their friends and family, get certificates framed and pick up flowers and Ryerson merchandise.

“I loved having my convocation ceremony at the Ryerson Theatre,” said Mahyn Qureshi, who graduated from the journalism program earlier this year. “During convocation, the weather is so nice. It was also nice being in the heart of campus for graduation.”

Ryan Bacic, who will be graduating from the international economics and finance program this spring, has spent a lot of time in the MAC working as a writer for the Ryerson Rams. He said his experience led him to love and appreciate the building as both an event and sports venue.

“The Mattamy is starting to become a hallmark building for us on campus, and the internal architecture of the building is simultaneously historic and contemporary; a concept which illustrates the heart of our university,” he said in an email. “A little resistance is understandable, but I welcome this new change and I hope it is maintained.”

The biggest change will be having more space.

The ceremonies at the MAC will be held on home ice, which seats 2,500 people with bowl seating and ice surface seating combined. The maximum capacity for graduates and guests in the Ryerson Theatre was 1,200.

As a result, graduating students will now be able to bring additional guests, said Daniel Lis, a student representative on the AWCC and the Ryerson Students’ Union’s VP education.

“I know I, like many students, will miss the beautiful Ryerson Theatre and quad as part of the ceremonies next year, but the MAC is a great space and I really appreciate that students can invite four family or friends rather than just two,” Lis said.

Sabrina Sgandurra, who will be graduating from the English program, appreciates the increased capacity.

“I have quite a big family and a lot of people who would want to be there … four might not be enough, but one of my siblings will just have to probably step aside,” she said.

Not everyone, however, is happy about the switch. 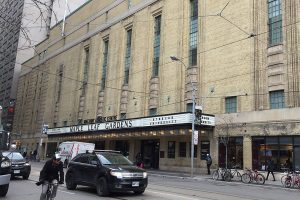 The Mattamy Athletic Centre will soon play host to Ryerson’s spring convocation ceremonies but it’s undecided whether it will host them permanently. (Photo by Luke Bellus)

Mahima Fotedar, currently in her fourth year of accounting and finance, is sad to be missing out on the “tradition” of graduating from the Ryerson Theatre.

“To me, the MAC doesn’t exactly give a graduation ceremony feeling,” Fotedar said

While the move to the MAC for the spring convocation comes as a result of the construction, the ceremonials office will consider whether to make the change permanent.

“As with any event, and any kind of venue change, there are logistical challenges, but we’re confident this will be a success,” McDonald said.

VOICES: Finding my way out

FEATURE: What it’s like being a Ryerson student with a learning disability