Stigma behind the afro is challenged in Ryerson alumnae film

With four films now under her belt, it’s just the beginning for Toronto-based director Alicia K. Harris. Her experimental short film Maybe If It Were a Nice Room, which explores her personal experience of rape, was featured at the Female Eye Film Festival in 2016 and won best production design at the North American Film Awards. That same year, Harris tackled a new and profoundly sensitive topic in her upcoming short film Pick: the social stigma around the afro.

“Growing up, I never saw myself represented,” Harris said. “There weren’t a lot of people who looked like me.” 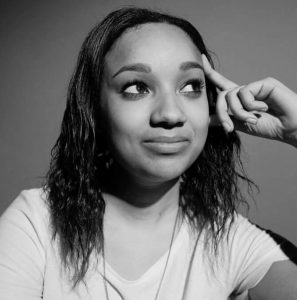 “Growing up, I never saw myself represented,” Harris said. The Ryerson alumna’s new film Pick tackles the social stigma around the afro. (Photo by William Ukh)

The film depicts a young black girl that wears her afro for the first time on picture day, resulting in microaggressions throughout the day from her peers and educators.

Maltese and Irish from her mother’s side and Jamaican from her father’s side, Harris is bringing a film to life that centers itself on western beauty preferences that women see daily.

“I made this film because black women and our hair are made to feel like the things we do with it are weird because it’s not normal to other people,” Harris said. “A lot of women will wear wigs, braids, cornrows and people will look at that like it’s ‘ghetto’ and it’s not. We simply like to experiment because of how versatile our hair is.”

The film includes rude and ignorant conversations Harris had experienced in reality, while growing up with people who didn’t realize the personal impact and consequences of their comments.

“Only after 12 years and making this film over the course of a year, I finally felt like I could cut off my hair and just have my natural hair again,” Harris said.

Harris, who currently works at a hair and beauty store geared towards black women’s hair, illustrates the normalcy of a black woman’s tendency to use natural products. Products like mayonnaise, coconut oil, bananas and even yogurt are common examples. An example of this is used when the young protagonist in the film uses apple cider vinegar and coconut oil to take care of her hair.

“This example is calling out the way institutions don’t give more care to a different marginalized experience they might not understand,” Harris said.

Pick has received the Filmmaker Assistance Program grant from the National Film Board of Canada and is set to be released next year. Harris aims to have it screened for the 2018 Toronto International Film Festival and in schools across Canada.

VOICES: Caring for someone with depression