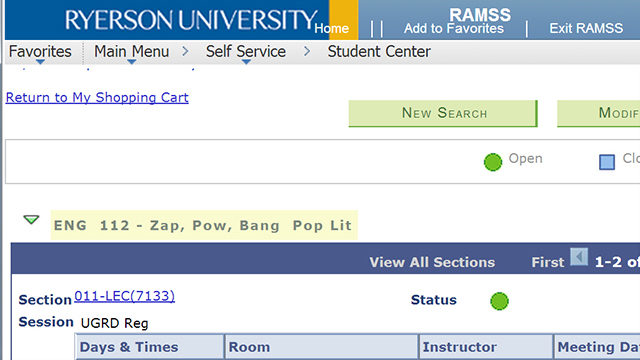 What’s in a name? At some universities in Canada, instead of a bird course in geography or sociology, students are earning their liberal studies credits in magic or Middle Earth.

Despite the names, students may not get what they hoped for at enrolment, as these names are more for marketing than accurately describing the course.

Undergraduate students at Ryerson encounter a pool of courses in the widest range of subjects to meet their liberal studies requirements. Courses like “Zap, Pow, Bang: Pop Lit” and “Booms, Busts, Panics and Manias” stand out among the rest for their unconventional and exciting names.

Robert Murray, a philosophy professor at Ryerson, denies that the intent of these course names is to boost enrolment.

“Sometimes the buzz around the topic of a course is part of the study of that topic. That is a legitimate reason for the attention-grabbing names,” he said.

“Despite the title, the course has to be of equal academic value to any other course,” he explained.

But a simple search on RAMSS shows that these courses have consistently higher enrolment rates than similar liberal studies courses over the past five years. “Zap, Pow, Bang: Pop Lit” had at least 66 more students each year compared to other English classes, while “Booms, Busts, Panics and Manias” is one of the most popular economics courses.

But Sarah Patrick, a first-year English student, doesn’t allow the flashy names to impact her plan of study. “The names (don’t) faze me,” she said, explaining that she relies on course descriptions to do the selling. “I want to make good use of my tuition.”

Roy Morley, a marketing professor at Ryerson, has been teaching “Effective Persuasion” for 30 years. “It started out as ‘Personal Selling,’” he said. “But it did evolve … people didn’t understand what it meant.”

At some point within the first 10 years, the course was renamed “Effective Persuasion.” Now it sees an enrolment wait-list almost every semester, he said.

While Morley has noticed “bizarre” course names emerging in universities across Canada, he said a course’s name should reflect its content.

“I frown upon it as a marketing tool,” he said. But Morley doesn’t think the name is solely responsible for enrolment rates. “It may attract (students) initially, but they do their research to find out if it’s a course they want to take.”

At Ryerson, professors can create courses as long as they get approval from the liberal studies committee. The professor submits a course package including a sample outline, assignment structure, grading scheme, course description and the course name. On top of this, the professor must prove how the course satisfies Ryerson’s liberal studies criteria, which is to “enable students to experience disciplines outside their fields of professional specialization” and “expose the students to varied types and methods of reasoning and analysis and modes of communication.”

Essentially, if the proposal can be backed up with enough information to satisfy Ryerson’s liberal studies criteria, it can sport an unconventional name.

Course proposals first have to be approved by their respective faculties before being considered by the liberal studies committee, but the committee’s chair, Christopher De Barros, said the majority of applications are successful.

“The process is set up to encourage these courses, so long as they are designed with liberal studies policy in mind,” he said.

De Barros said he receives between eight and 12 applications for new liberal studies courses every year.

The drive behind creating these courses doesn’t come from the university, but from professors who rely on having courses to teach. Shelley Rabinovitch, who teaches “Magic, Witchcraft and the Occult Phenomena” at the University of Ottawa, insists that the name was created to market her course, which attracts upwards of 800 students a year.

The religious studies course explores the history and psychology of practices based on paranormal phenomena in relation to traditional ideas of religious behaviour.

While some courses are more popular than others, departments at Ryerson will regulate this to ensure “economies of scale” as Murray puts it. By limiting the number of sections available in the popular courses, it allows for the school to offer “a balanced curriculum in an economically feasible way,” he said.

With this balance in mind, Ryerson keeps the popularity of its uniquely named courses in check amidst the surge of unconventional classes being introduced at post-secondary schools across Canada.

And while they may jump out during course intentions, a course by any other name could be just as sweet. 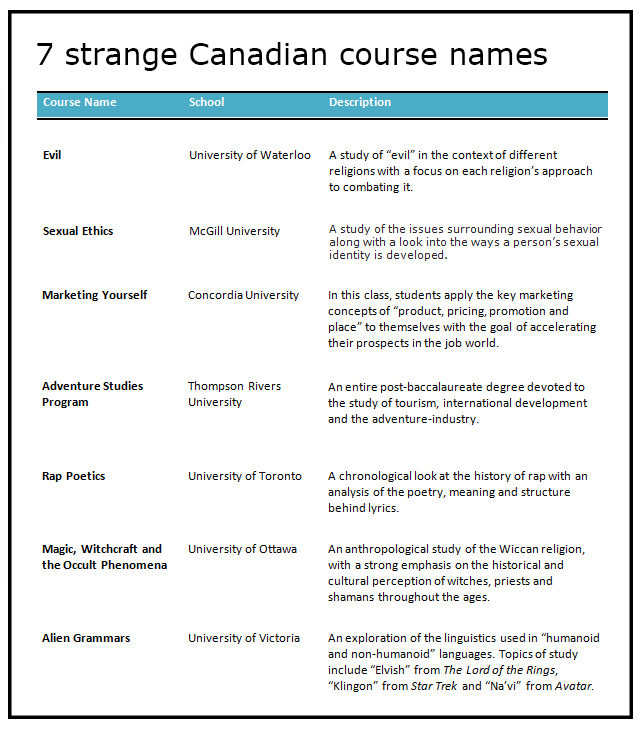 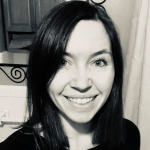