Second-year nursing students in the collaborative degree program between George Brown University and Ryerson University will miss their weekly clinical placements this semester due to a provincewide college strike.

The strike has affected 24 colleges and 12,000 public faculty staff. Ryerson nursing students who are in the collaborative bachelor of science in nursing degree program studying at George Brown or Centennial College have not been in classes this week. Students in the program who are studying at Ryerson are not affected. 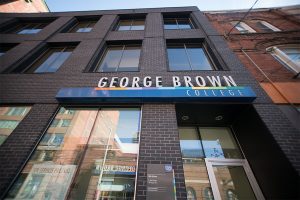 George Brown College is one of the 24 colleges affected by the strike. Faculty and staff have been on strike since Monday and classes have been cancelled. (Natasha Hermann)

Marlene Monica, a nursing student at Ryerson, says that the strike has taken away an important hands-on learning experience out of the classroom. Faculty who oversee work placements at George Brown and Centennial are on strike, leaving students who participate in the work placements in limbo.

“We are not allowed to go to placement,” Monica said. “It’s the out-of-class component, which is probably the most important part.”

Monica took time off work last week and a few days this week in preparation for midterms, which were scheduled to start this Friday.

“That’s hundreds of dollars of paid work I missed out on because I was trying to prepare for midterms,” she said.

Teachers have asked students to continue their studies during the strike because midterms will begin once the strike is over. Monica says she is worried she won’t be able to co-ordinate her work and school schedule in time to prepare for midterms.

“This doesn’t work for me to support myself, it’s not financially sound,” she said.

Jeanne Bhen, a nursing student in the collaborative degree program between Ryerson and Centennial College, says she has been asked by professors to work on additional homework along with midterm studying. Bhen says she is also missing out on clinical placement this semester.

“I already set aside September to December just for schooling, so I’m not working and I’m not doing any other classes,” she said.

Despite the stress, both students say they think it’s reasonable that college faculty are on strike.

“All of my friends are in complete support of our professors and the staff that we see every day,” said Monica. “I have felt the high negative impact of having teachers who have just been hired, only part-time or contract, who aren’t familiar with the curriculum and who don’t really know the material too well to be teaching it to us.”

Bhen also felt like her professors were not properly prepared.

“I feel like none of the teachers know what’s going on, they don’t know how to teach their classes, they’re not organized and I can never find my teachers [after hours],” said Bhen.

One of the demands by the Ontario Public Service Employees Union (OPSEU) representing the faculty on strike is a reduction in the number of part-time employees for an equal 50/50 ratio between part-time and full-time staff, claiming that 70 per cent of college teachers are part time. 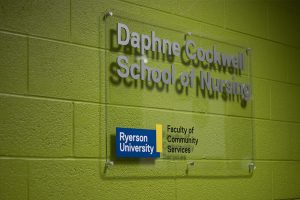 Pharsha Vipulanandan, a first-year student at the Centennial-Ryerson nursing degree program, says she also supports the strike after having a difficult time learning from part-time teachers this semester.

“When you’re straggling three jobs at a time, I don’t expect you to know all the answers to my questions,” she said. “It’s not fair to both sides.”

Vipulanandan said the part-time staff have not properly prepared her for midterm exams this semester, and not being able to confront teachers during the strike has made studying difficult.

Christiana Tu, a student returning to school in January for the nursing program at Centennial-Ryerson, says she called the college recently, concerned about her acceptance.

Tu said there will be less time for individual students, more stress for staff and crowded classrooms when she returns to class in January.

“I’m quite stressed and I’m not even in school yet,” she said.

Students and staff are unsure about how long the strike will last.

“It should end when the 50/50 part-time full-time ratio is met,” Vipulanandan said. “I feel it has such a significant impact on student education and the well-being of the faculty and their mental status. How well [faculty] perform will increase if they have stability, which translates to our stability as learners.”