A Ryerson student who sells pot to first-year students in residence said they think more people will start going to individual dealers once marijuana is legalized next summer.

The Ontario government plans to sell the drug online and at Ontario Cannabis Retail Corporation (OCRC)  stores to Ontarians age 19 and over when pot is legalized on July 1, 2018. 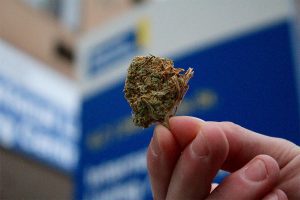 A Ryerson student who sells pot holds up a nug in front of the International Living and Learning Centre (ILLC), Nov. 12. (Photo by Maggie Macintosh)

“If you come to me, I can tell you exactly what the weed’s like. I can put a name to the experience, and training government officials to do that is not something that will be the same experience as a pothead talking to a pothead,” said the student, who agreed to speak with the Ryersonian on the condition of anonymity.

The student dealer said they don’t think the underground market will change and more people in general will actually buy pot illegally, through individual dealers, because there won’t be any criminal stigma attached to smoking it.

Smokers will continue to buy from their current dealers because they trust them, and OCRC stores won’t be widely accessible to all Ontarians, the student dealer said.

Forty stand-alone stores will open across the province in July in cities including Toronto, Brampton, Mississauga and Vaughan. That number will increase to 150 legal marijuana storefronts by 2020.

“Because so many people already have dealers, people who want to try weed will be referred to the dealers, instead of driving to an (OCRC) dispensary,” they said.

Coming from a town of around 20,000 residents, the student dealer said small-town smokers, in particular, will keep buying from illegal suppliers because the trek to a government store is inconvenient.

“We’re lazy, we’re potheads, we want the easiest way to get weed,” they said.

Diana Abo Harmouch, a part-time Ryerson student trying to get into the creative industries program, said government-regulated storefronts will be more safe for smokers. 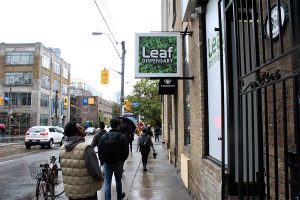 A group of people walk past Toronto Leaf Dispensary on Church Street on Nov. 12. (Photo by Maggie Macintosh)

“Consumption will be more controlled. You’ll be aware of the quality of what you’re buying,” she said. “If we have alcohol that’s sold in these types of stores, why not weed?”

Harmouch thinks Ryerson students will go to OCRC stores if they need to de-stress or clear their heads.

“Weed is just having a smoke, like smoking a cigarette,” she said.

The anonymous dealer, who makes anywhere from $100 to $150 a week, said they don’t plan to deal long-term. They deal so they don’t have to pay for pot.

They charge $10 per gram, unless a friend is buying seven grams or more, then they’ll take $10 off the total. They said that’s another bonus of buying from individual dealers or dispensaries.

“I wish that the government had found a way to incorporate their legal process into those already active dispensaries, because they built a customer base,” they said.

Ontario’s latest proposed pot legislation states the province will close illegal dispensaries and impose fines on those that re-open this summer.

“The laws, regardless, are strict, but they’re strict for alcohol also. So, if they’re going to implement it, this is how they would do it,” Evans said.

Dispensary employees could face fines starting at $250,000 and potential jail times of up to two years for illegally selling the drug.

Daley said 60 to 70 per cent of the dispensary’s daily customers are students.

“They love it,” he said. “We’ve even got some student specials going on.”

Daley said he’s never received any complaints about the storefront.

“We see all types of people coming in here and everybody gets the same love. We don’t discriminate nobody,” he said.

Pay-to-win takes a bite out of wallets