Meet Glass Ceiling Productions, a group of five young women in their fourth year of Ryerson’s RTA School of Media releasing a film that is normalizing the conversation of sexual assault, abuse and consent.

Their coming-of-age film, The Remnants of Eden, is about sexual consent in a relationship and speaks about a traumatic event that happens to the main character, Eden Rosen.

Rosen becomes fearful of her first love. With the help from friends and family, she recovers and her spirits begin to lift.

But, the remnants of her past still remain. 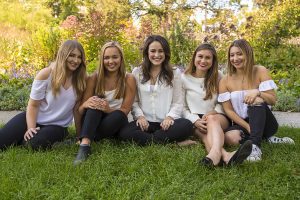 “She goes through this really traumatic experience but she is still able to pick up the pieces and stay strong, and keep growing, and share her story, and build up her confidence again,” said co-producer and financial lead Sydney Weinstock. Rosen is an independent only child who dreams of becoming a director and actor. In the summer right before senior year, her world shifts when she meets a friend’s nephew, Zach, who comes to town for the summer. Rosen’s confidence and innocence is lost with the introduction of Zach.

Zach is an overbearing character who constantly puts Rosen in a difficult position and makes her feel very insecure. Rosen’s independence is lost as she becomes dependent on Zach, a character switch from who she initially was.

As a young woman figuring out her place, Rosen’s traumatic experience forces her to start from the beginning.

“It is something that I feel like a lot of people can relate to,” said director and story editor Trish Riswick. “You are trying to figure out who you are and then all of a sudden someone changes the course of it.”

The all-female executive team – Weinstock, Riswick, creative director Holly O’Brien, marketing and casting director Amanda Mastantuono and co-producer and production co-ordinator Sloane Lester – say they are seeking to empower women to speak up and share their confidence with the rest of their peers.

The group’s name came out of the realization that five women are creating a movie about a young girl’s journey, and having the film tell a story centred on women. The feminist term glass ceiling came to mind.

“In the industry, you do not have that many women behind the camera telling you stories for girls, and that was something that we really wanted to do,” said Riswick.

“If you are not ready, do not feel pressured by other people around you, especially your boyfriend – he should love you for who you are and not what you will do with him,” said Lester.

Through The Remnants of Eden, Glass Ceiling Productions’ goal is to start a conversation about sexual assault and abuse, not only for women but for men as well.

The group members say that you should not be ashamed to not engage in certain activities because it should not be an issue or something to be embarrassed about.

Sexual abuse and assault does not just affect the person to whom it is happening to, it affects everyone. Mastantuono suggests that although you may not know someone who has gone through it, you have probably read a story regarding the topic online or you have had a friend of a friend who has been through the situation.

According to Statistics Canada, sexual assault is more common than some may suspect, as one in four women experience a form of sexual abuse in their lifetime.  Young and vulnerable women are most likely to be sexually abused.

Statistics Canada also reports that sexual assault is one of the most underreported crimes. This is attributed to a range of reasons such as shame, guilt, and stigma of sexual victimization. Though there has been an increase of societal awareness regarding sexual assault, it is still an issue in Canada.

With this information, Glass Ceiling Productions aspires to encourage women to speak up and support one another.

After three days of casting, the media school students were able to create a team of seven main characters for their film.

“When our actors would come in for their auditions, they were amazed that it was an entire panel of women who were casting,” said Weinstock. “It was shocking to us because we figured that they have gone to an all-female panel of women.”

With the help of friends and family, the team was able to raise its goal amount of $5,000 in nine days through crowdfunding.

“The amazing thing about our families is we had distant relatives reaching out and sharing our content and we were like, ‘how is this resonating with so many people?’” said Weinstock. “It was really amazing to see so much support.”

Alongside their objective to normalize a conversation about consent, at the end of their movie the filmmakers would like the audience to feel a connection to Eden Rosen and the emotions and hardships that she went through.

According to Lester, you never really know a situation unless you have been through it and to watch someone go through it is just as painful. “We want (the movie) to hit home and make (the audience) realize that this is not OK and this is something that needs to be put out there,” said Lester.

Consent is important at any age as the simple act of conversation makes people feel comfortable and respected.

“Whether it is regarding sex or anything else, even if it is just a kiss, it is really nice for someone to (ask), ‘can I kiss you?’ instead of them just doing it. Conversation goes a long way,” said Riswick.

Their project began during their third year and will première within the first few months of 2018.

FCAD Creative Zones to be relocated to Bond Street