While thousands of students continue to report fake, malicious emails sent by the university’s cybersecurity initiative, some students are asking Ryerson to cut the phishing line.

CCS has received complaints about the emails causing stress from students, Lesser said. 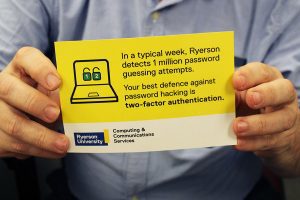 “If somebody made the effort to say, ‘look, I really, just don’t want to receive (phishing emails),’ and communicated that to us, we took them off the list,” he said.

One student posted on Ryerson’s class of 2019 Facebook group about concerns the initiative is triggering for victims of phishing attacks and students living with mental health issues.

“I believe we should be able to unsubscribe to the ‘fake’ emails we are receiving from the institution we are paying for our education,” the post reads.

The student would like to remain anonymous because of harassment and death threats made on their post.

They added that they felt distressed when they started receiving emails from CCS. At the time, they were in the hospital for mental health issues.

They also asked members of the page if anyone was interested in starting a petition to make the phishing emails an opt-in program.

Despite the backlash, Lesser said that the CCS has also received a lot of positive feedback.

“The goal is not to stress (students) out, the goal is to send them something that an attacker might send them and then safely train them,” he said.

Lesser said he wasn’t aware of any petitions to alter the program. 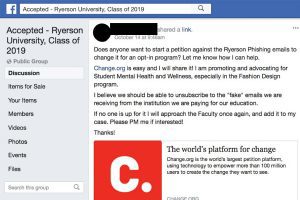 A Ryerson student posted in the Accepted – Ryerson University, Class of 2019 group about their concerns about Ryerson’s Cybersecurity Awareness Month fake phishing emails on Oct. 14, 2017. (Photo by Maggie Macintosh)

CCS staff will reflect on the initiative and consider alterations for the future at the end of this month.

Kieran Ramnarine, a student who commented on the petition post, which has since been deleted, said many students have been posting about the phishing emails.

The computer science student said the positive impact the campaign has had on students outweighs reasons to stop or make Ryerson’s fake phishing initiative optional.

“It’s kind of like the fire alarm ideology: doing a fire drill will help you be more prepared for a fire alarm than an actual fire,” Ramnarine said. “So why not do that as well for cybersecurity.”

“They sent me a private message and then I did some digging on their Facebook profile and I Googled one of their pictures and realized it was a photoshopped picture of a celebrity.”

Ramnarine said he messaged the account, and was immediately blocked.