Students fill the gap in composting efforts at Ryerson 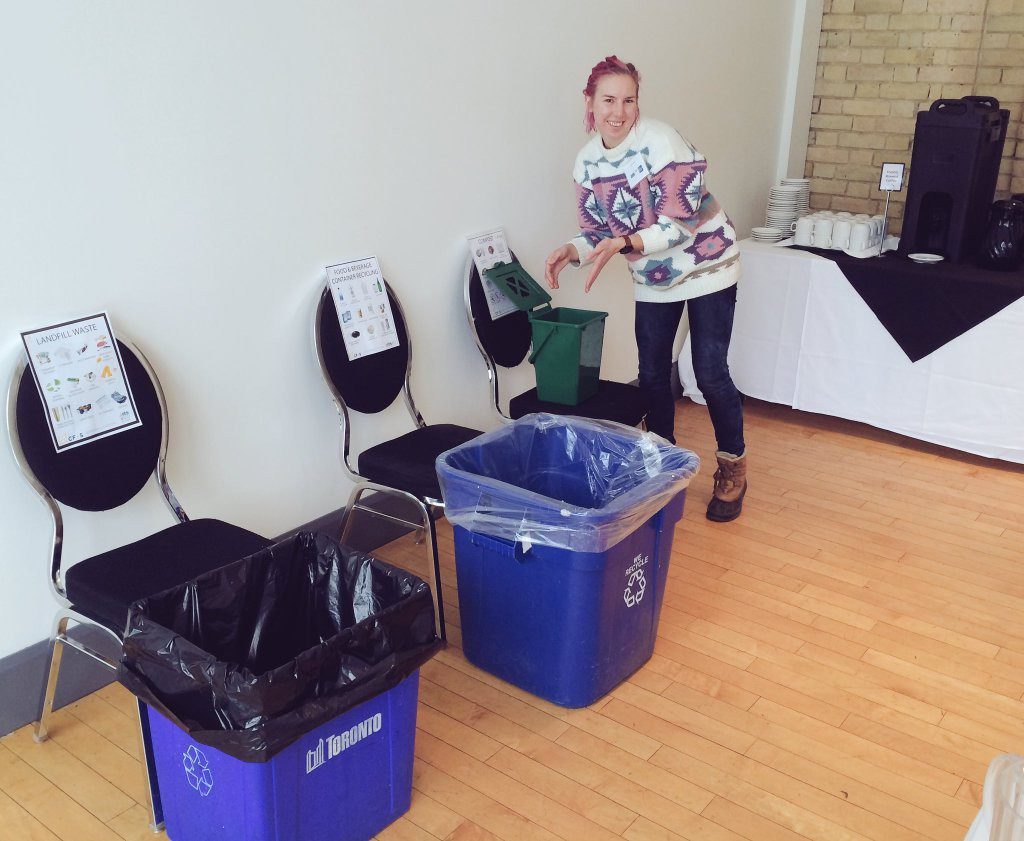 On top of overflowing waste bins on campus lie rotting apple cores and banana peels; organics that should be going in a compost. In paragraph

But there are only a handful of accessible compost bins on campus – and Ryerson is not making expansion a priority.

“It was frustrating because I would have my apple cores and banana peels, and I’d feel guilty putting it in the garbage. I knew that it would go right into the landfill,” said Sarah Brigel, co-founder of Microbe Hub, a student-led initiative to bring vermicomposting on campus.

Vermicomposting is a process in which worms are used to decompose organic material.

Currently, campus facilities and sustainability has accessible composting bins at the Hub Cafeteria on the ground floor of the Podium.

It would cost Ryerson close to $500,000 to implement compost bins across campus, according to Karina Maynard, sustainability co-ordinator at campus facilities and sustainability.

But Maynard said investing that money would have a greater impact reducing heat or electricity, rather than expanding the composting program.

“When you look at greenhouse gas emissions and where Ryerson can make a big difference on carbon, it isn’t going to be with composting. But you can’t just skip priorities, you need to be working on each one,” said Jennifer Fischer, co-founder of Microbe Hub.

Accessible composting bins were placed in the Hub Cafeteria the fall of 2015, but the university has been composting in back of house for over five years. New bins, placed with proper signage in “high traffic” areas, were monitored over a two-week period.

An audit conducted after the pilot showed the organic stream had over 90 per cent contamination, which meant that all the contents in the organic bin had to be thrown in the waste.

“The one area it had a higher success rate was in the Hub Cafeteria, which is why we now have the organic bins there,” Maynard said.

The lack of accessible composting bins on campus led Brigel and Fischer, both fourth-year environment and urban sustainability students, to start a vermicomposting project as an effort to increase composting on campus.

A waste audit in 2014 showed that almost 60 per cent of Jorgenson Hall’s waste was compostable, which is where Microbe Hub has placed a total of 11 accessible compost bins for students to place their organic materials. 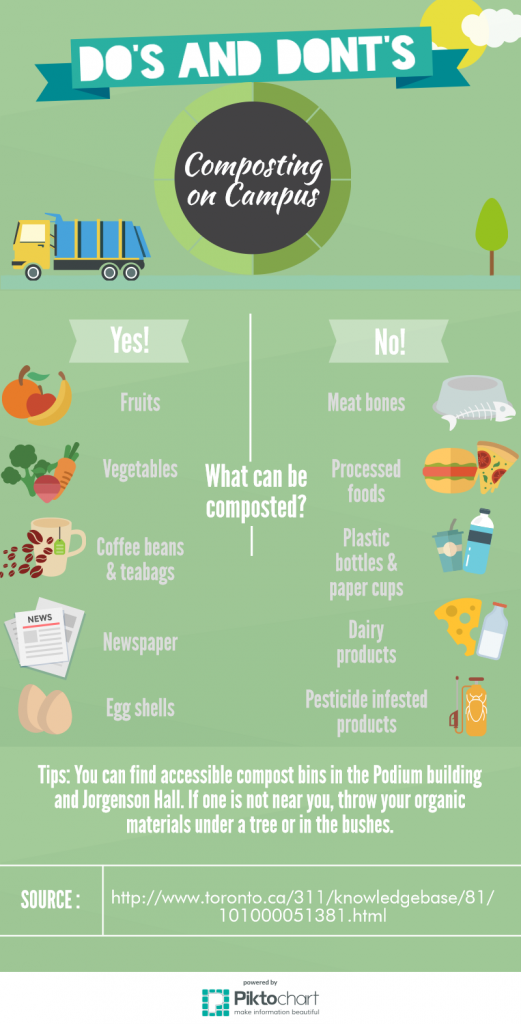 Unlike a typical compost bin, which decomposes organic material through bacteria or fungi to produce fertilizer, Microbe Hub uses red wiggler worms in the vermicomposting process to eat the organics.

Red wiggler worms are preferred in vermicomposting because of their ability to breed and consume waste fast. Twice a week and in teams of three, Microbe Hub collects the waste from the bins in Jorgenson Hall and brings it to the large worm tubs housed in a science lab at Kerr Hall North to sort.

“For me it feels like a treasure hunt,” said Brigel.

In the lab, six large plastic tubs each foster 1000 red wiggler worms crawling through bedding made of food scraps, paper, grass clippings, and sand. They typically can eat half their weight in a day.

Sand is used in the bedding to help the gizzards, which work like gears, to break down the food in the worm’s belly.

“Our worms are picky eaters compared to what your city compost would be,” said Brigel.  They aren’t going to be able to eat processed foods, so we have to take those out.”

The worms eventually produce castings or vermicast, which are the end-products used as nutrient-rich organic fertilizers and soil conditioners.

On average, Microbe Hub feeds the worms 18 to 20 kilograms of organic food per week, and as of Feb. 9 the team has diverted 122 kilograms of compost from the landfill.

According to the the Brigel and Fischer, the leftover waste that the worms can’t eat has to be thrown in the garbage. Ryerson has had a back of house external compost pickup system for five years.

“When you talk about the scale of how large Ryerson is, there needs to be more than just vermicomposting. There are so many different forms, it’s like saying that we are going to use one type of energy for a building,” Fischer said.

“A lot of initiatives are good but some of them are great. Of course, each initiative will require financial resources,” said Lachemi.

Institutions like the University of British Columbia and Concordia University have implemented a sustainability fee of $2 per student that is included in their tuition. This funds sustainability initiatives such as composting.

At the University of Maryland, undergraduate students voted in favour of increasing fees by $2 every year until it reaches a total of $12 per student.

“This is a standard practice at most universities that we aren’t doing at Ryerson, and a missed opportunity,”  Fischer said.

But Andrew Millward, an environmental and urban sustainability professor thinks there are two reasons for why it’s taken Ryerson until 2015 to implement accessible compost bins.

The first is that collection of organics has been seen by campus facilities and sustainability as “complicated, messy, and perhaps not cost effective,” Millward said.

There has also not been enough student and staff demand for compost bin collection.

“I believe that the Microbe Hub project can begin to remove these barriers and draw attention to the ‘value’ of organics,” said Millward.

Although Microbe Hub needs leadership from campus facilities and sustainability, says Fischer, the onus needs to go back to Ryerson to make composting a priority.