Ryerson will temporarily lose some of its limited green space next summer due to the restoration of the Recreation and Athletics Centre’s (RAC) roof. 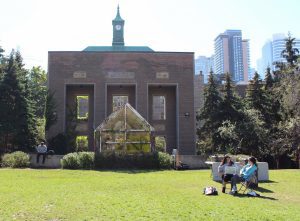 Ryerson’s quad will be closed starting May 2018, due to repairs to the Ryerson Athletic Centre’s roof. (Photo by Alexis Perikleous)

The Kerr Hall quad will officially close in May 2018 and will likely affect events such as convocation and orientation.

The quad is scheduled to reopen Fall 2018, but is subject to change. In an email sent out earlier this month to Ryerson employees, Ryerson Facilities and Management Development (RFMD) stated that poor weather conditions next summer may cause delays.

Kim McDonald, manager of the ceremonials office at Ryerson, said they don’t know how the loss of space will affect convocation ceremonies.

“It is such a beautiful space on campus and nothing matches it,” Hayward said. “There is a better time to have done this construction.”

The quad is also used by many students in the summer for day-to-day activities such as studying, hanging out or playing sports.

“When it’s nice out, I always make a little picnic and go to the quad to do my readings and get some sun,” said Mia Arcangeli, a fourth-year psychology student. “Because I’m from Aurora, being in that nice green area feels like I have a little bit of home downtown.”

During orientation week, events like the Guinness World Record challenge, the Fiesta Del Fuego concert, outdoor movie nights, registration and invocation are held in the quad.

But Ryerson students aren’t the only ones who may be affected by the quad’s closure. Ryerson’s Summer Day Camp program runs from July to August each year with campers aged 6-16. The quad is frequently used for games and team-building exercises.

“It’s our only safe place with grass,” said Ryerson’s soccer camp counsellor, Alessia Carvalho. “Losing this grass will force us to play inside Kerr Hall gyms and will take away from the game.”

Carvalho said playing outside was one of the campers’ favourite parts about soccer camp.

Students also use the quad in the summer.

“It sucks to not have that space anymore,” said Ryerson Students’ Union (RSU) president Susanne Nyaga. “But as somebody who uses the RAC and knows that this maintenance is probably well overdue, unfortunately we’ll just have to accommodate for it and move around that.”