Students transitioning to university are most vulnerable to mental health issues

Your alarm clock goes off at the usual time – 7:30 in the morning. The rising sun casts a warm light in your room as you get dressed, and the early bird gets the worm. You go to the kitchen and sit at the table with your favourite breakfast laid out by your mother. You’re having poached eggs, sausage and Canadian bacon, with rye bread and a cup of orange juice. There’s time to spare before you head to the bus stop that takes you directly to the front doors of your high school. It’s your first day. Class is in session. Your friends are sitting in your four-square desk arrangement, and you graduated middle school with more than half of this class. There are only 30 students in your classroom. This isn’t so bad, you think as your nerves ease and your muscles relax. This is not as big a step as you thought it would be.

Four years later, you’re a post-secondary student. You wake up at 6:30 a.m. and throw on your clothes. You turn your lamp on, for the sun hasn’t risen yet. You run downstairs and grab the breakfast prepared the night before. You eat your buttered croissant and drink from your coffee mug on the hour-and-a-half commute to Ryerson University. You just make it to class after getting lost on the vast campus, and you’re one of 200 students in the lecture hall. You look to your left and then to your right, and there are no familiar faces in sight. This is the big step you’ve anticipated, and it may almost feel impossible to make it through.

“It is possible,” said Owen Benoit, a 17-year-old first-year Ryerson journalism student. “Although university is much larger than my high school, you have a whole institution behind you.”

Benoit described his journey as a Ryerson student as exciting, but not all first-year students feel the same.

The gap between being a first-year and a fourth-year student isn’t as big as it seems, but it’s a gap filled with a lot of experiences, fears and anxieties. Any student, regardless of their year, is susceptible to a lot of stress and anxiety that may lead to mental health issues, however first-years are the most vulnerable to experiencing it. More experienced students, like fourth-years, have a lot of wisdom and advice to offer first-years.

Aryad Fattahyani, an aerospace engineering graduate, believes the best service to mental health issues may be the voices of students who have been there.

Fattahyani was 21 years old when he started his university journey. He came from Iran to Canada to pursue his education in aerospace engineering at Ryerson. He didn’t know a single person on campus and his entire support group was back home. He calls his adjustment period “stressful.”

He recalls his first year as the most difficult, where he faced a period when he wanted to call it quits. “In my first semester, I failed three classes,” he said. “I was distracted by the other things I had to do.”

Indeed, this would be a major setback and a time when a vulnerable first-year would be tempted to throw in the towel and avoid future failures, but this was a period in Fattahyani’s journey where he learned his most valuable lessons. “It really helped me grow as a person, and the experiences you get in university help you deal with certain situations which will further help you in your future job,” he said. 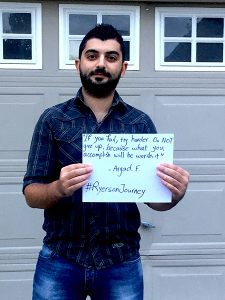 “If something doesn’t go your way, it’s okay. If you want to do it, you will do it,” he said. Fattahyani advises first-years that university is worth it. “What university teaches you is more important than your courses. Everything will fall into place.” he said.

According to Ryerson’s Health and Wellness website, the inability to accept uncertainty is a major cause of stress and mental health issues in students. These include the ‘what ifs’ that assault the minds of first-years. Claire Bradbury, a first-year journalism student, said she often gets caught up comparing herself to others in her program. Students in her class say they were involved in their school paper as an editor or a writer.

“Wow, I’m just an 18-year-old moving out on my own for the first time. I’m out of my league,” she said with a chuckle. She said that the ‘what ifs’ are inevitable, like “What if I don’t pass my classes?” or “What if I’m not as good a writer?”

Fattahyani said that in his first year he thought he had to be the best to succeed. “This mindset only made me disappointed and stressed, and I knew it was time to change,” he said. “You don’t always have to (try to) be the best at what you’re doing because it will only disappoint you.”

In 2016, the university’s mental health committee presented policy work that prioritized inclusivity as one of Ryerson’s principles for the well-being of students. 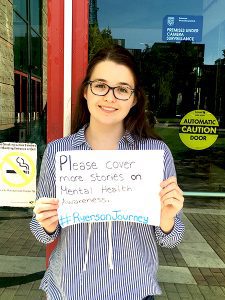 However, Bradbury said that only 80 out of the 130 students in her program were able to get tickets to attend J-frosh. “So many people couldn’t go,” she said. “I was disappointed in that because it was meant to be really inclusive.”

Bradbury said her high school teacher would go on about how “in university you’re on your own and no one cares about you because you’re just another number.”

“It’s expected to know no one will hold your hand,” she said. However, she finds that Ryerson takes initiatives to support students by offering many support services.

Learning and transition facilitator at Ryerson, Deena Shaffer, hosts Mood Routes every Tuesday from noon to 1:30 p.m. The gathering meets on the main floor of the SLC, and departs on a stroll to encourage students to get away from the computer, get walking, get talking and get to know local nature spots. According to the event page, this all-welcome nature walk “helps to restore concentration, uplift mood, decrease stress, build community, broaden perspective and spark creative thinking.”

Another program at Ryerson that aims to improve mental well-being on campus is called the RU Therapy Dog Program. Around five therapy dogs are available to cuddle and de-stress with students on the third floor of the SLC. It takes place on Wednesday from noon to 1:00 p.m. “I’ve used therapy dogs once and it was so much fun,” Benoit said. “The fact that they’re actually implementing things like this says a lot about Ryerson.”

“If I ever do face mental health issues, I will use the services on campus to help,” said Benoit. “I have no shame.”

In Robert Nosworthy’s opinion as another Ryerson first-year student, many first-years often shy away from voicing their issues with mental health due to the stigma that follows it. “Not everyone is willing to open up because not everyone sees mental health as something to not be ashamed of,” he said. He added that there should be more coverage on stories about mental health to encourage students to seek the help they need.

Why Ryerson had its biggest Cybersecurity Month yet