Past and present Ryerson students work the set at YTV

Ryerson graduate Mena Massoud and Duhin Nanda, a third-year media production student, were roommates in Neill Wycik student residence in 2012. The pair now share more than just that in common as they both work with YTV.

Massoud graduated in 2014 and missed the convocation ceremony to attend the screen test for Open Heart, a new young adult mystery series in which he now stars as a hospital volunteer leader.

“It’s really a huge deal to book something of this caliber this quickly out of school so I feel very blessed,” he says.

Open Heart tells the story of Dylan Blake, played by Karis Cameron, who attempts to solve the case of her father’s disappearance. She collaborates with two friends she met while completing community service at the hospital where her father was last seen. The trio must carry out their covert investigation under the watchful eyes of their bossy volunteer leader and Massoud’s character, Jared Malik, who provides much-needed comic relief in an otherwise tense drama.

Massoud is no stranger to the show’s medical setting. He studied neuroscience at the University of Toronto for a year before enrolling in Ryerson’s theatre program.

He says that he was expected to pursue a career in the medical field like his siblings. His parents supported acting as long as it was “just pursued as a hobby,” he said, but he couldn’t handle the pressure of calculus.

“I’m thankful for (Ryerson) welcoming me into a home where I just got to be involved with acting all the time,” he says.

Massoud (right) on the set of Open Heart. (Stephen Scott for Epitome Pictures)

Ryerson is also home to Nanda who can be seen hosting YTV’s Big Fun Movies. He has interviewed actors like Steve Carell and Jennifer Garner, something he calls “a privilege” rather than just “a job.”

Nanda was interested in acting but the 2013 MuchMusic VJ Search — a contest that searches for the next MuchMusic television personality — inspired him to pursue on-air reporting. Although he was not selected for the competition, he later landed a job as a reporter for the MTV Video Music Awards in New York. This gave him the confidence to audition for YTV.

“If I won the lottery for $50 million, I would still keep doing this because it’s just something I enjoy so much,” he says.

Nanda says that the RTA School of Media has helped him learn about all aspects of television broadcast.

“The thing about Ryerson is that it really gets you close to the industry,” he says.

Students can catch Massoud on Open Heart Tuesdays at 9 p.m. and Nanda on Big Fun Movies every Saturday and Sunday. 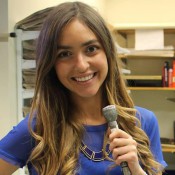 Rachelle Robitaille was an Arts & FCAD reporter for The Ryersonian. She has a passion for television broadcast, entertainment and the French language.

Rachelle graduated from the Ryerson School of Journalism in 2015.

Rachelle Robitaille was an Arts & FCAD reporter for The Ryersonian. She has a passion for television broadcast, entertainment and the French language. Rachelle graduated from the Ryerson School of Journalism in 2015.