BREAKING NEWS
RSU lays off the majority of its equity service centre staff during COVID-19...
Midwives stepping up to increase health-care system’s capacity in the face of COVID-19
Students and employers adjusting to on-campus job changes
Death and burial during COVID-19
Four people share their working from home routine
Community NewsFeaturesNewsOff Campus

Back in the late 1990s, if you were to tell somebody you lived in Regent Park, the response would likely be, “Whoa, you live there? Isn’t it dangerous?”

Regent Park, a neighbourhood located in downtown Toronto, is recognized as one of the lower-income neighbourhoods in the downtown area, with a higher representation of visible minorities, refugees, immigrants and Indigenous peoples. According to Statistics Canada, Regent Park is one of the poorest neighbourhoods in the country. Approximately 70 per cent of residents live below StatsCan’s low-income cutoff rate. Regent Park experiences a higher rate of violence, crime, drug abuse and social issues. According to Global News, it’s been that way in Regent Park since the late 1980s.

Living in such an environment could make it difficult for a child; many found it easy to get involved with the wrong crowd.

Chad Briand, also known by his former gang name, “Turk,” was one of them.

Briand has been in and out of jail several times. He started selling drugs at the age of 13.
But he took control of his destiny and decided to change his life for the better.

Born and raised in Toronto, Briand spent his youth in the Regent Park community. He recalls growing up in an environment that wasn’t entirely favourable. “There’s some stuff as a kid that seems normal to you,” said Briand. “But as you get older, you realize that it’s not normal stuff.”

Looking back, Briand, who is now 36, remembers his upbringing being very difficult and challenging. He says he was exposed to daily violence on his way to school and that he encountered brutal police interactions. There were no positive role models for Briand while growing up, as most of the older men that grew up in the area were often affiliated with drugs and gangs. Briand says these influences led him to eventually follow the same path.

“The older guys in your area you’re supposed to look up to… they’re all drug dealers, most of them anyway,” said Briand.

He said that from his preteen years, he was getting in trouble with the law — often because he was in the wrong place at the wrong time. After serving six and a half years in jail, Briand said he knew it would be the last time he spent behind bars. He said he decided to take the initiative to change gears in his life and create something positive out of a negative. “Just from [my last time in jail], I knew I wanted to do something different. I knew I wasn’t going to come out and just continue doing what I did every other time when I came out… I just knew it was time for a change,” said Briand.

Briand is now not only the owner of a roofing company, but also the director of the Turk Foundation, his own non-profit organization. It was established a year after he was released from jail, in 2017, and aims to unite youth that reside in neighbourhoods across Toronto which are prone to gun and gang violence. The Turk Foundation serves to educate youth on leadership skills and focus on positive decision-making.

One weekend in its first summer of operation, the organization launched a day camp for youth who wanted to learn about boxing. Before the weekend ended, Briand realized how successful his initiative was and decided to invest even more time, effort and money in his organization. “I knew this was something I was going to pursue,” said Briand. “I just want to put every dime in it, every ounce of energy.”

Briand says that because he was aware of the street politics kids encounter, he knew they pick up on the fact that certain neighbourhoods do not get along, so they avoid kids from other communities. In an attempt to eliminate this sort of mindset, Briand paired up the kids in different groups to have them interact with one another. After the activity ended, he brought the children in a circle and explained where each of them were from.

He says they were shocked to know they had just formed friendships with kids from other blocks, something older males in the neighbourhood would never have done. “That’s the important part of the camps,” said Briand. “I want to get the younger generations to understand that you guys are fighting for blocks that are not yours… like my block, at some point I was willing to die for that place.”

Remembering his own childhood, Briand says he understands the pressure exerted by the older guys in the neighbourhood for children to follow in their footsteps. He says that’s why he is eager to help youth rise above such forms of negativity.

During other activities, such as music classes and fitness clubs, Briand says he takes the time to share his own experience with the children — who are usually 12 or 13 years old — and strives to make sure they understand that the wrong choices in life could lead to serving time in jail or being a victim of violence.

For this reason, Briand says he believes his dark childhood may have served a greater purpose not just in his own life but the lives of others. “At the end of the day I think all the bullshit I went through was probably for a reason,” said Briand.

He says he has received positive feedback from youth that attended the session, as well as from their parents.

Briand’s organization has had a ripple effect on one of the youths that attended the boxing camp session. Briand met a teen who was charged with robbery and now, the teen is creating his own organization.

One person who helped host the boxing camp session, says he was also positively affected by Briand’s work.

Triston Brookes, a two-time national lightweight champion, says he is truly happy to be associated with the foundation. Brookes says he admires the persistence of the foundation in helping youths who live in troubled neighbourhoods. “It’s inspirational because they [members of the Turk foundation] have a troubled past,” said Brookes. “To go through what they went through in their lives and come back and give [knowledge] to these youths, is what they need.”

Brookes says the Turk Foundation has inspired him to become a role model for the youth he encounters when he visits schools. He says he wants to help those kids find their true identities in a way that will not negatively affect their lives.

“Me going to different schools and helping out those youths, will help them understand the other ways to channel their energy,” said Brookes. “It could be the best thing they’ve ever done, looking at the other side of things to make them better.”

The foundation does more than just host boxing camps. It offers music classes, health and fitness sessions for the youth and helps teens in high school gain volunteering hours.

Not only does the Turk Foundation help children, it is also dedicated to helping others in need, such as those who are homeless in the streets of Toronto. Last winter, the organization kick-started an initiative called the Take a Coat Leave a Coat Program.

Briand says he was inspired to start this project by a post he came across on social media, describing how a U.K. organization started a project of leaving coat racks in high traffic areas for people in need. Donors could drop off a coat; those in need could take one. He brought the initiative to his organization and it was launched in December as part of the Deep Freeze Aid campaign, which serves to help homeless people in Toronto get through the cold season. The racks were originally located in three areas of the city. They’re now at only one spot, on Church Street, but Briand says he is working on expanding locations and would like to have 10 racks around the city next year.

“People are not only putting jackets,” he said. “I see bags, blankets and hats…it’s turning into something I didn’t even expect… I think it’s headed in a good direction.”

Briand says he named his foundation “Turk” for it to be a daily reminder of where he came from. He says he’s eager to make a difference in the community he grew up in and is aiming to reach the whole of Toronto in the best ways he and his colleagues can.

“I was going to name it something else, but then I was like, ‘nah man.’ I always want to be reminded of what I went through to get here.” 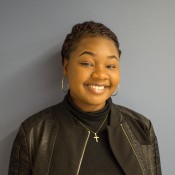