Tax tips: How to save money when you file your return

Students learned how to file their taxes Monday night, an often overlooked skill.

Nearly 40 students attended the “Tax Night” event at the Sandbox hosted by the Creative Industries Course Union  to learn some basic tax skills and tips. Speaker Lisa Gittens, senior tax professional at H&R Block, focused mainly on the experience of filing taxes as a student, including some deductions that university students can claim.

“Every student is entitled to claim their tuition tax credit, whether they have income or not,” said Gittens.

But for students who freelance or do casual work, taxes can be tricky. “I’m a freelancer, and I also work part-time at a store,” said Rachel Kirstein, third-year creative industries student. “The store stuff is pretty simple…But as a freelancer, things get a little more complicated.”

The idea for the event came to Melody McMullan when she realized she would not be getting tax paperwork for the internship she did this summer.

“I realized I had no idea how to do my taxes,” said McMullan, the vice-president academic of the creative industries course union. “So basically, it was me realizing the gap in my own knowledge and the gap in the knowledge of a lot of other students.”

Andrel Zulaybar graduated from the environment and urban sustainability program last June, but wanted to attend the event because he “knew absolutely nothing about taxes.”

“I knew that I had to fill them out and give them to my parents for them to do,” said Zulaybar. “But as the market and economy continues to change, I think it’s very important to learn for yourself.” 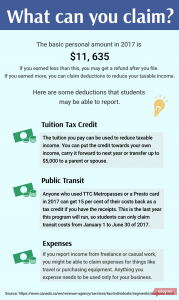 Many students at Ryerson, like Zulaybar, have little knowledge about financial processes like filing taxes. According to a study by PwC Canada, out of 5,500 millennials surveyed, only 24 per cent “demonstrated basic financial knowledge.”

The government of Ontario is trying to boost this number by overhauling the Grade 10 career studies course. The new curriculum is set to roll out in September of this year, and will include financial and digital literacy, such as budgeting and financial management.

“That [information] will be one-quarter of a half-credit course,” said Tricia Barry, founder and executive director of Money School Canada, which runs instructional programs on financial literacy for children and parents. “So that, while it’s certainly a step in the right direction, is not necessarily hitting it out of the ballpark.”

According to Barry, it often falls to parents or to events like these to teach young people about their finances. This was one of the goals of the night, said McMullan. “It’s trying to help foster both basic and advanced knowledge about something we just literally never get taught.”

For Zulaybar, it worked. “I’m looking forward to actually doing my own taxes now,” he said. “Sure, I might need some professional help along the way, but I’m certain that with the knowledge I gained today, it’ll be beneficial for me in the long run.”