Amidst the laughter that followed, Rosen clarified his point. He said men are more faithful than women – when it comes to shopping. He added that customer loyalty should never be underestimated.

The founder of one of Canada’s most successful luxury retail companies, Harry Rosen Inc., was a guest Tuesday evening as part of the Ted Rogers School of Management’s Retail Week, an annual event that brings in industry professionals to talk about ways to be successful in business.

“Women are too smart. Women have some notion of how they want to look (and) there are a variety of sources they can lean on that give them a picture of what they want to look like. They go to a variety of stores and they make enlightened choices,” he said. “Men are worried about the experience of shopping. (The man) is intimidated. He just hasn’t got a clue about how to build a wardrobe with confidence.”

Rosen is still the executive chairman of his namesake company, while his son Larry serves as CEO.

Rosen said his ability to make less fashion-savvy men feel confident about their wardrobe choices contributed to the success of his company.

“I attribute the (growth) of the Harry Rosen brand from one store on Parliament Street to many (stores) to our ability to get customers to believe we are competent and sincere and (that we) would do the right thing by them,” he said. “This is the most rewarding part of my whole experience — how you develop sufficient faith in your customers, (so) that they will go out and talk about the service you provide, the ability that you have. I’m eternally grateful for (the) people … who’ve helped to establish the reputation of the store.”

“The retail community is obsessed with the loyalty aspect,” he said.

The retail superstar has many connections to Ryerson: Rosen sits on the Board of Governors, has made sizeable donations to the business school in the past, and has recently enrolled in humanities courses.

Rosen added that another integral part of his business is  keeping up with growing trends in the younger generations of consumers, such as students.

“I’m 83 and I’m looking at this young audience here, and I honestly feel that I’m on their wavelength, even though I don’t look it,” he said. “I learn and observe. (The) consumer is always changing and (it’s) always a challenge to stay current. That’s really the trick, in my view, to longevity as a retailer.”

However, one thing still hasn’t changed since he opened his first store 60 years ago, he said, and that’s men’s reliance on someone else to do the shopping for them.

“Men are still lacking in confidence and appreciate being handled by a professional. They’re still very much the same, where they need help. 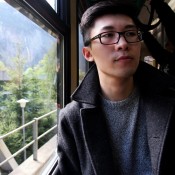 Ryerson photography student work displayed at the AGO