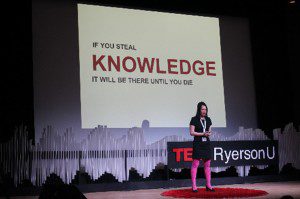 Kevin Shaw, an RTA School of media alumni, lost his vision at 19 during his first-year of university.

Today, he is an innovator in the world of entertainment production and is the founder of Zagga Entertainment, an on-demand site to stream described videos (DV) for the visually impaired.

Created in 2010, TEDxRyersonU is a student-led initiative, which is a branch of the non-profit organization TEDx. The group aims to connect students through engagement on campus, with the motto “ideas worth sharing.”

This year’s event focused on the theme of echoes, to exemplify self-reflection and to resonate ideas.

“Everyone is different in the world and they have different outlooks on how their goals and perceptions leave echoes in a world,” said Mariam Nouser, a community outreach manager.

TEDxRyersonU chose seven speakers, including Shaw, from Ryerson’s alumi, faculty and student body to speak at the event.

To begin his talk, Shaw had the audience participate in an activity and blindfold themselves, covering both eyes and ears, while he played two videos with and without DV.

The activity was to help audience members understand the importance of these services (audio description and DV) in web television series and media.

“We’re creating a Netflix for the blind,” Shaw said.

Some speakers received a standing ovation. But a 22-year-old spoken word artist, Patrick de Belen, was praised with finger snapping from the crowd.

As the youngest Canadian spoken word champion, de Belen recounted his interactions with students and the struggles Asian Canadians  millennials face with the educational system.

“We’re quick to point out injustice in the world, but lost as to how to fix them,” said de Belen.

Some guests were even moved to tears.  Ryerson alumnae Tammy Fansabedian tweeted, “(I) didn’t know spoken word poetry could bring a tear to the eye! So powerful.”

During the break, guests were able to use two interactive projects from the startup companies, Oculus Rift and Tactile Audio Displays (TAD).

Oculus Rift allowed guests to try on a virtual reality (VR) headset displaying games in 3D, while others sat in a TAD chair. The chair acted as a plug-in music player, sending vibrations in accordance to channels and is compatible with VR systems.

Nouser said the sold out event was the most successful this year. Echoes 2014 ended with a free museum exploration for guests.

The next TEDxRyersonU will be held in November 2015. However, Nouser said they will be holding smaller events that are similar to TEDx in the winter semester.
https://storify.com/heyheyheyagaiin/tedxryersonu-event