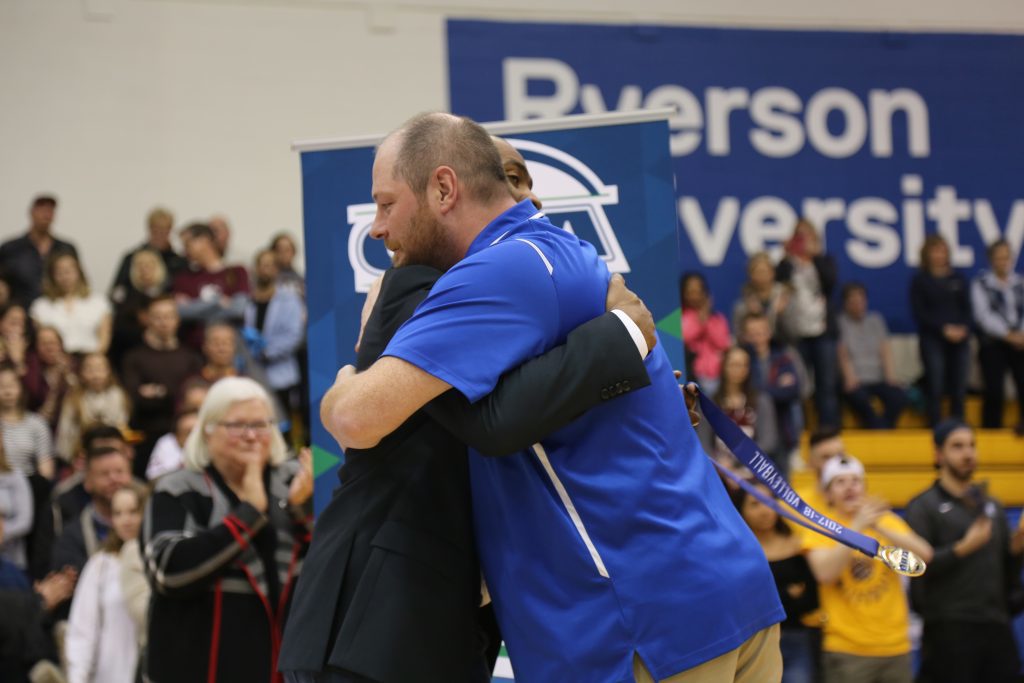 If you didn’t know the Ryerson women’s volleyball team dropped the first set of the OUA Quigley Cup championship match Saturday, you wouldn’t have guessed it by looking at head coach Dustin Reid.

Reid sat calmly in his chair all throughout the set, getting up occasionally to stretch his legs. When a rogue volleyball bounced his way, he skipped forward and booted it toward the official, much like a dad at his kid’s rec league soccer game. A few players on the bench laughed.

“He’s very joke-y, laid back,” said middle blocker Theanna Vernon. “But he does have a hardworking side.”

You’d certainly expect to have a hard-working coach given the historic season the women have had. The undefeated Rams brought home their first ever OUA banner after beating the McMaster Marauders in four sets on Saturday’s match at the Mattamy Athletic Centre. But this season isn’t just historic for women’s volleyball — it’s also the first perfect season Ryerson has seen in nearly 60 years. For all of the team’s achievements, Reid was named coach of the year by the OUA.

While the players deserve plenty of credit for their performance all year, this moment has been a decade in the making for Reid, who’s coached the Rams for 10 seasons now.

“The culture that he’s created in this program now is amazing,” said assistant coach Glenn Imperial, who’s worked alongside Reid for nine years.

“He has this patience and this understanding with young people that it takes time.”

The players seem to agree, as they only have compliments to give to their coach.

“I love Dustin,” said Vernon. “He’s so kind and so calm, even when we’re in tight situations.”

But Reid deflects the praise. “It starts with great players,” he says. And the Rams have them in spades.

Key to their success this season has been the depth of their younger players. Rookie Janelle Albert and sophomore Lauren Veltman have both stepped up to play major roles this season. Reid and the staff scouted Albert and worked to recruit her since she was in ninth grade. But having a strong team identity is what attracts talent, and it’s what all the players point to when asked about what has made this year so special.

“I’ve said this so many times. We click so well together. We work hard at practice and we work with connecting each other,” said sophomore player Lauren Veltman.

Imperial said the team’s culture stresses the importance of being a good teammate —by not just being friends, but holding themselves and each other accountable.

And Reid’s steadiness carries over to his players. “When you meet Dustin, you feel that right away,” Imperial said.

“He doesn’t get rattled,” said Ryerson Athletics director Ivan Joseph, whose first hire was Reid. “He doesn’t get caught up in the emotional highs and lows of the game.”

All season, the Rams have started their games slowly, and the Quigley Cup was no different. Ryerson lost the first sets against Western and McMaster in the semifinal and championship matches.

Imperial said Reid told the the team to “relax (and) believe.” Instead of panicking, the Rams stuck to their plan and won both games.

“That’s a Dustin Reid team,” said Imperial. “He’s always a builder. He always knew what the big picture was.”

And that big picture is to win at nationals.

The Rams are playing the UBC Okanagan Campus Heat Friday at 8 p.m. at Laval University in Quebec City.