BREAKING NEWS
Top five COVID-19 safe Halloween activities for students
U SPORTS cancels winter national championships, all games until March 2021
Ryerson’s Jack Layton Chair hosts livestream of educators and musicians during COVID-19
Is your cough COVID, a cold or the flu? How to tell the...
Ryerson to launch a virtual pop-up gallery to raise awareness about sexual violence
NewsOn CampusStudents 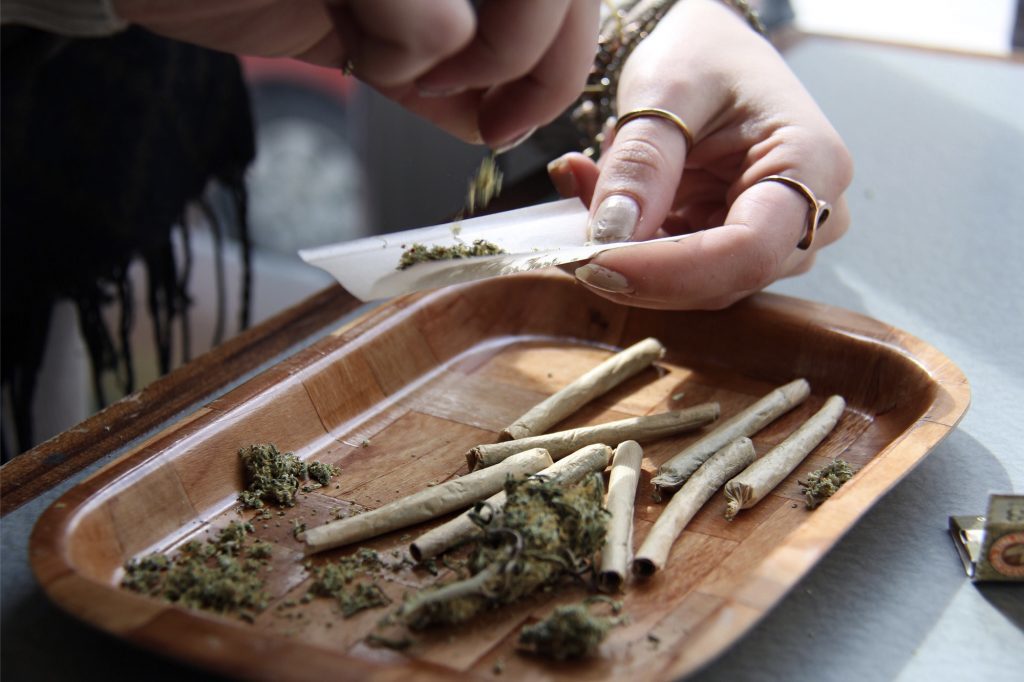 The liberal arts have long been stereotyped as part of a pot-loving hippie culture — the philosophy student who’s always burning sage and throwing you into an existential crisis while puffing on a joint, the English major who’s also in an indie band and has an aura of mystique thicker than the cloud from his bong toke — and a recent campus survey conducted by first-year Ryerson journalism students suggests this stereotype may not be so far off.

The survey reports that 49.5 per cent of students in Ryerson’s Faculty of Arts smoke weed, with 51.5 per cent who either do not or rarely smoke. This makes the Faculty of Arts the largest weed-smoking student faculty out of all the faculties at Ryerson.

In contrast, the Faculty of Communication and Design (FCAD) ranked highest in non-pot smokers, with over two-thirds saying they do not or rarely smoke pot. Ted Rogers School of Management and Faculty of Science students ranked second and third, respectively.

The Ryerson University survey was a randomized poll, conducted person-to-person from March 3-7, 2017. The margin of error is plus or minus three percentage points, 19 times out of 20.

“I’m not that surprised because even in my classes … smoking weed is something I feel like we talk about a lot,” said Alexandra Nicholson, a fourth-year sociology student. She added that many of her philosophy and sociology classes have open discussions about marijuana, perhaps explaining why the majority of students are comfortable users of the drug. “I mean, there’s even drug dealers in my program that I’ve bought off [of] before.”

Daniella Beca, a fourth-year English student was surprised by the survey results. “I thought at first that we were just stigmatized as having the highest [number of pot smokers] because of pop culture and movies.” Beca was shocked that business, science and FCAD had the lowest smoking population because many of the people she knows in those faculties are regular pot smokers as well.

Nicholson had similar sentiments about FCAD. “FCAD I have to say I’m surprised by. I kind of associate smoking weed with creativity. A lot of artists seem to smoke and a lot of artists have more reason to smoke and I feel like FCAD is a very creative faculty.”

Though FCAD ranked lowest in weed users, it is the faculty of many traditionally creative programs, such as photography, which people often associate weed smoking with. Stephanie Sutter is a fourth-year photography student who smokes weed. “In the arts, you are constantly trying to create new and fresh ideas and I personally find that if I smoke weed before I start brainstorming, my mind will wander into deeper places than I wouldn’t have thought of otherwise.”

Though she said she would not have been surprised if FCAD ended up with the most pot smokers, she also added, “As much as I know a lot of [FCAD] students who smoke, I know a ton of people who don’t and have a different process of creating.”

According to the 2012 Canadian Community Health Survey–Mental Health (CCHS–MH), over one-third of 18 to 24-year-olds use marijuana, which is more than any other age group. This demographic also happens to dominate the university population.

For Beca and Sutter, they’re more inclined to think that marijuana use is prevalent throughout the entire university, with fluctuations throughout. “I think it’s more prominent because of the overall student culture,” said Sutter, adding that many students and friends she knows, including herself, smoke to cope with the stress of being a university student. Beca also said, “I don’t think it should differentiate between programs — you can have someone in business who loves to go out on weekends and photography students who use it for creativity … I think in every faculty, there’s different people.”

As to why some faculties might have ranked lower in users, Melanie Winter, a fourth-year photography student, said it makes sense to her that faculties like science have lower smoking rates. “In more creative fields, it becomes more open and less about analytic research, like it is in the sciences. Pot enhances subjectivity, which is what art is more about and not so much objectivity that you need in science.”

Nicholson also thinks it might be program-related, and said that the results could perhaps be due to a lack of transparency about weed in more rigid class structures, like business and science.

City of Toronto cracks down on bad landlords