With Halloween steadily approaching, there’s still enough time for most people to get a last-minute costume together. If you were a cosplayer, however, this would be nowhere near enough time.

Cosplay, short for “costume play,” is the ever-growing trend where fans create and dress up as their favourite characters from movies, television shows and video games. Conventions like FanExpo, Toronto ComiCon and Anime North see cosplayers arrive by the thousands, showing off their often elaborate and homemade creations amongst like-minded fans.

Mikayla (Mikki) Verman, a third-year sociology student, has been cosplaying for seven years. Like most cosplayers, she taught herself how to sew and design her own costumes.

“I learned from YouTube videos,” she said. “And crying, and practicing.”

The process begins months and sometimes years before, depending on the intricacy of the costume. But before any of that, it starts with a character.

“[It depends on] how much I like [the character],” said Vyllana Nguyen, a second-year creative industries student who has also been cosplaying for seven years. “[It’s] how similar we are. Do they remind me of anything of my past? Is there a nostalgia effect? It’s just the resemblance I see of myself in that character.”

From there, it’s all about planning and budgeting. Cosplaying is a costly hobby, but a proper budget sees Nguyen spending roughly $50 to $150 a year. 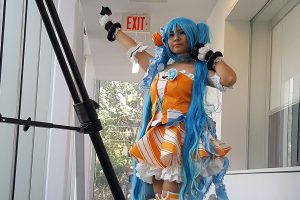 “As soon as I could, I’d start saving up to buy materials,” said Verman. “I’d start researching tutorials or start talking to people who have done the same character. The majority of [the work] gets done a month or two before the convention date. Although, if it’s some huge project, I’m working on it at least a year in advance.”

Verman’s most intricate costume is of Samus, the protagonist of the popular Nintendo game, “Metroid,” in her Varia armour. It took Verman a month to put all the pieces together, but it took a whole year of studying to learn how to create the armour.

For fifth-year occupational health and safety student, Michelle Hong, preparations are made seven months beforehand. After settling on her character, those early months are completely focused on designing and laying out the pieces she needs to sew. In the following weeks, she gathers the fabric and gets to the grunt work: sewing.

“That can take awhile,” she said. “Sometimes I finish it just before the con, or like maybe a month or two ahead of time.”

While it’s the norm for cosplayers to make their own costumes from scratch, many also outsource work to more experienced crafters if they want props or clothes done a certain way. For seven-year veterans Verman and Nguyen, taking on commissions just adds to the fun.

“[I do] lots and lots [of commissions],” said Verman. “I like to have [them] finished at least two weeks before the convention day, so if they try it on, they want to get a photoshoot of it, or if something happens, they have time for me to fix it.”

Between working on commissions and their own costumes, it’s not hard to believe that some have made cosplaying their full-time job. Similar to models, these professional cosplayers sell photographs and generate a following through social media and regular convention appearances.

However, going professional seems like a lofty goal to Verman, who prefers to keep cosplay as a hobby.

“It would be really awesome to do it professionally, [but] that’s not my end goal,” she said. “It takes a lot of the pressure off.”

Like the vast majority of the fans that flood convention floors, the appeal is less in starting a career and more in the creativity and connection with other fans.

“I think it’s just seeing your favourite character in real life,” said Hong. “[Other people] see their characters [and] they’re like, ‘Oh my gosh, people know this show exists.’ ”