The DFZ gets space to grow 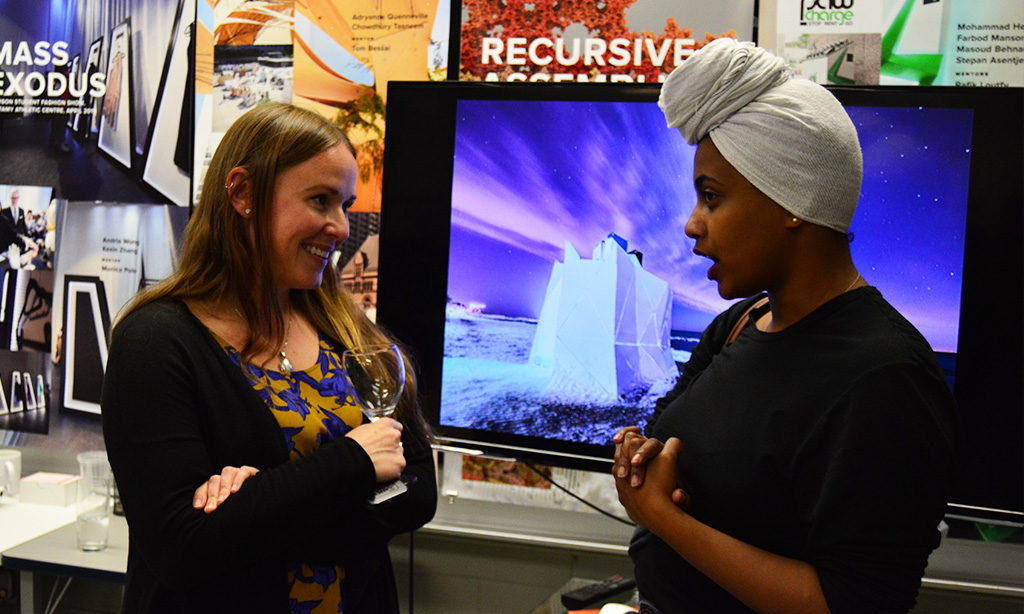 The Design Fabrication Zone (DFZ) is expanding its number of members, projects and recently, in location. The DFZ is going from being cramped into a few rooms on the third floor of the Victoria Building to stewarding a new “future lab” that will be located on the main level of the Church Street development.

“These changes are very exciting for us and quite a pre-occupation,” said Tom Bessai, the Managing Director of DFZ. “The street front building will allow us to have an open space for the public to come and go and we’ll have some good functional spaces for our combined rooms.”

On Oct. 27, the DFZ hosted their annual open house at their current location. Attendees were able to tour the facilities and get a behind the scenes look at design fabrication projects currently underway. Bessai presented a panel on what the DFZ offers, their current activities and a vision of what the new location could bring.

“Our new fabrication zone will have everything from 3D printers, manufacturing Robots, laser cutters and CNC machines for prototyping,” Bessai said. “Fabrication is a fairly new concept but we’re hoping to become more and more coversive in the new space.”

Founded by faculty member Filiz Klassen in 2014, the DFZ currently has around 250 members and 80 projects. These projects vary from installations such as The Bluffs, which were designed as a seating area for Ryerson’s Launch Zone in the Student Learning Centre, to commercial products such as Joyride, a bicycle anti-theft device that uses free public Wi-Fi to track stolen bicycles.

Klassen explains that once school is finished, the DFZ will help students enhance their skills outside of the classroom.

“DFZ offers students and graduates access to facilities on evenings and weekends, as well as free mentorship from professionals in the industry…otherwise, they would be doing these things from home,” she says.  “There are some of us on campus who can express things by making and I want to make sure that entrepreneurial activity is recognized.”

At the annual DFZ open house, The Ryersonian got a behind the scenes look at two projects that are currently underway. 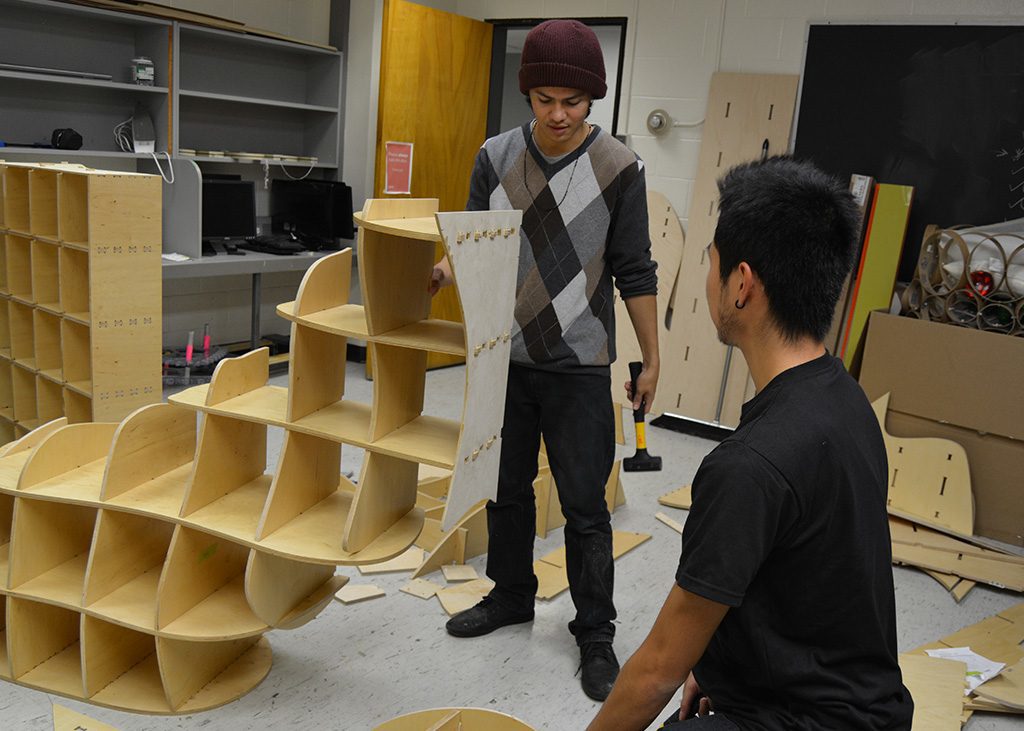 “There are about 40 Master students using that space and as of now, there aren’t many storage spaces for their personal belongings and items that they are using in there. This is going to be an amalgamation of both,” Aquino states.

The installation is made out of birch plywood sheets that are stacked on top of each other, giving off a wavy look. The colour will be a mix of raw wood and white paint.

Aquino explains that in his program, they do a lot of project planning and designing but not as much creating. “At the DFZ, we’re transferring the design knowledge that we’ve learned in our program into this real life installment.” 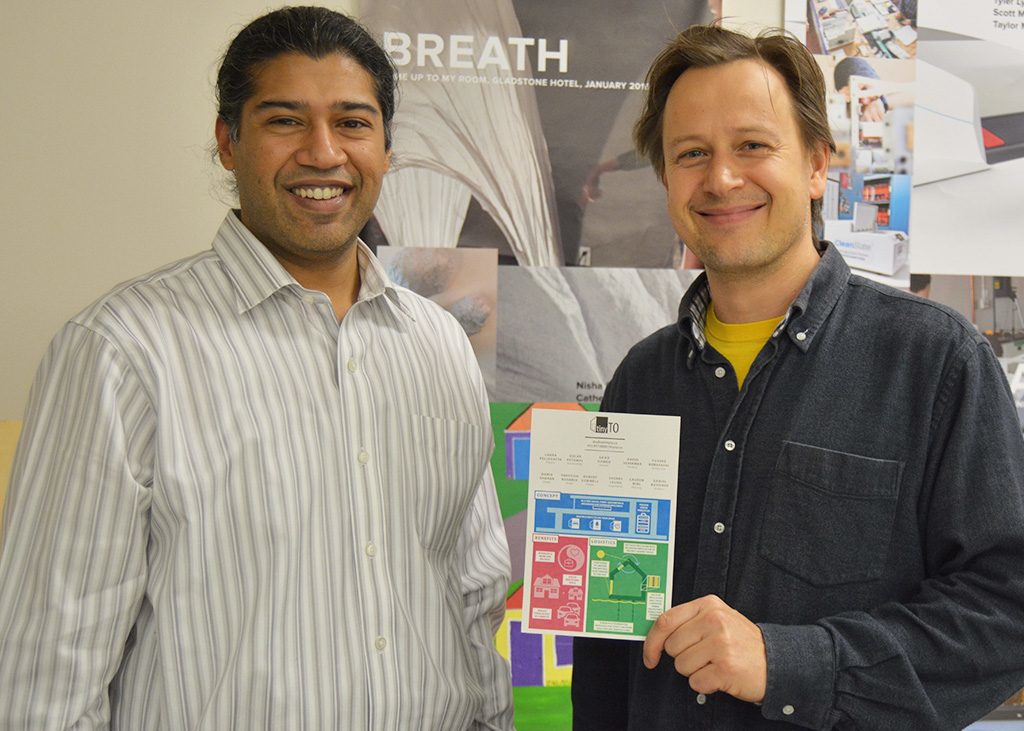 Sa’ad Ahmed (left) and Jacob Antoni (right) pose for the camera with their brocure of Tiny TO. (Ebyan Abdigir)

The second project is a commercial product called “Tiny Toronto.” The Founder, Sa’ad Ahmed and Lead Designer/Architect, Jacob Antoni have been putting full-time effort into the building systems of this project since last June. The idea is to build tiny houses in the city of Toronto that are affordable and eco-friendly. These tiny houses are mobile and can be placed in backyards of houses that have extra land. Ideally, it’s like having a condo in your backyard.

“Our first prototype is going to be an office. It doesn’t have a kitchen or bathroom but it does have electricity so you can use it as a work space or dedicated space,” Ahmed explains while showing illustrations on his iPad. “It’s a project that is going to fill the need for affordable housing which is a pressing issue in many major cities across North America.”

Antoni adds that whoever lives in a Tiny TO does not lose the social connection of their neighbourhood. “You can Airbnb it, rent it or even build it as a retirement cottage in your backyard so you don’t have to pay for a retirement home.”

These are only two of the 80 and counting projects at the DFZ. With the confirmation of the “future lab” at the Church Street development, young entrepreneurs will have more space and equipment to turn their ideas into reality.

The multidisciplinary building is set to open just north of Dundas Street in the 2018 academic year. In the meantime, the DFZ continues to hold workshops, hackathons and competitions to get students involved.