The Ryerson school of journalism’s first-ever teach-in began with a discussion on why journalism matters, looking at the evolving business and the role of journalists within it.

Gail Cohen, the media director for the Canadian Civil Liberties Association, spoke about who is considered a journalist and what they need to do to be successful in an uncertain landscape. 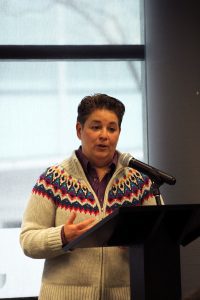 “A journalist — is it someone who is trained in a journalism school? Is it someone who started out delivering papers and worked their way up through the ranks without any particular education, beyond the school of hard knocks? Is it a woman standing on the street with her iPhone capturing a cop kicking a kid around and then posting it to Facebook? Is it a hacker in some dark room on the other side of the world getting his hands on state secrets and putting them on the dark web?

“It’s probably all of these things to one degree or another. But to me, the main thing is that a journalist is a storyteller. But not just a weaver of tales — a good story has to be truthful, well-researched, contextual, clear [and] interesting, uncovering important issues and explaining new issues about aspects that are out there already,” said Cohen.

According to Cohen, the U.S. presidential election was an incredible wake-up call for journalists. To her, they play an important role in democracy and the current structure is failing.

“The 24-hour news cycle, in my opinion, had almost killed journalistic integrity. The drive to outrage or shock [and] get ratings and clicks literally trumps the truth and real, hard news reporting about the important issues,” said Cohen.

As journalism evolves, so does the role of the journalist. It isn’t enough to be able to do just one thing.