Liberal MP Rob Oliphant spoke at Ryerson University this week about a private member’s bill to help develop a national strategy for Alzheimer’s and other dementias.

Bill C-233 was seconded by Oliphant after Conservative MP Rob Nicholson advocated for it in 2015. The bill is being read by the senate and aims to improve treatment, care and research for patients suffering with Alzheimer’s and dementia, said Oliphant at a panel in the George Vari Engineering and Computing Centre Thursday.

The discussion stressed the importance of developing the roles of homes, community sectors, financial institutions and the government in fighting these diseases.

An advisory committee of health experts would be formed, and when the bill is implemented, Philpott will be required to submit a report on its effectiveness once every year.

While it is ultimately up to individual provinces whether or not they want to adopt any practices, medicines or strategies, the federal bill would alert them to the growing demand for a national strategy. It could also encourage provinces to provide funding for these things, which they are not currently required to provide.

Oliphant said that his push for Bill C-233 came after he realized that “he had lost the battle for Bill C-14.” Bill C-14 allows Canadians to seek physician-assisted death only in cases where death is “reasonably foreseeable,” and Alzheimer’s and other dementias don’t qualify, he said.

According to Oliphant, Bill C-14 is too restrictive.

He wanted to allow people with these diseases to have the advanced directive option with Bill C-14, whereby they can choose what will happen to them before they become too weak or fall into a coma.

“The health minister will have to take questions about Bill C-14 and advanced directives after a two-year period,” Oliphant said. 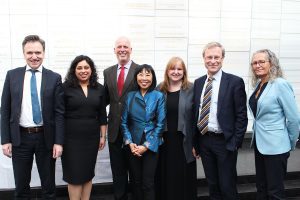 Eckart Schnabel from Germany’s National Association of Health and Care Insurance Funds in Berlin, said during the panel that he has a project similar to Bill C-233 in place, and it appears to be working.

The association has marked 150 research goals for partners to reach and about 500 community alliances across Germany. Each of these dementia networking projects began with a mere 10,000 euros, and have all grown since then.

Schnabel said that Germany, like Canada, is also very strict about end-of-life policies. In place of physician-assisted death, he said: “We have advanced palliative options where patients get to choose which medications they receive for both inpatient and outpatient care.”

The physician-assisted death bill will be up for review in 2018.