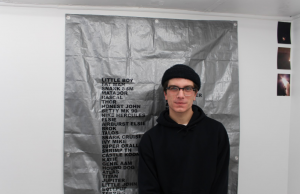 In The Bomb Party, or What Goes Up, Grayson Alabiso-Cahill has created a profoundly compelling mediation on the relationship between violence and spectacle, and the absurdity of war.

Alabiso-Cahill, a fourth-year Ryerson photography student, created the exhibition as part of his senior thesis project following a particularly jarring experience that occurred this past summer. On Victoria Day, Alabiso-Cahill found himself shooting off fireworks with his friends at a local park when, out of seemingly nowhere, a kid rolled up on his bike and began to shoot Roman candles at the group.

“That moment for me in retrospect was really important – seeing this convergence between violence and spectacle in such a weird way,” Alabiso-Cahill says. Following the incident, Alabiso-Cahill found himself becoming increasingly interested in the relationship between violence and spectacle and thinking of other ways in which the two might meet. Thus, The Bomb Party, or What Goes Up began initially as a research project, as Alabiso-Cahill found himself reading works by German artists Hito Steyerl and Wolfgang Tillmans on the relationships between art and capital, and becoming more interested in explosives, war and the military-industrial complex. 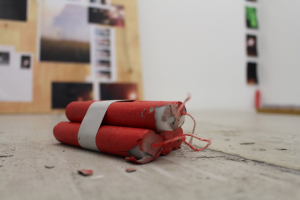 Alabiso-Cahill came into photography and art by way of DIY zine-making and self-publishing. During his time at Ryerson, he became more politically engaged and came to better understand art theory, which heavily influenced his practice.

The first pieces produced for the exhibition were a series of 10-by-16 centimetre prints taken from found footage and appropriated imagery of fireworks displays, as well as test videos of missiles. In these images, Alabiso-Cahill highlights the visual similarities between explosions of fireworks and explosions of missiles, drawing an aesthetic parallel between how we look at war and how we look at these spectacular displays of nationalism and entertainment.

Elsewhere in the exhibition, Alabiso-Cahill reflects on the farce and rhetoric surrounding bombs. A List of Bombs in The American Arsenal suggests that the nicknames of bombs are used to hide that they are, in fact, actually weapons. Here Alabiso-Cahill asserts that, with names such as “Fat Man” and “Little John,” these rhetorical strategies aim to turn these weapons from a body count into a laugh track.

Inspired by Cuban artist Felix Gonzales-Torres and his work, Untitled (Portrait of Ross in L.A.) (1991), the exhibition also features a stack of prints intended for free distribution among visitors. The photographic prints mimic the propagandic media that weapons manufacturers produce, while the act of distribution among visitors makes physical the ways in which a militaristic ideology is spread and brought into our homes, lives and the realities of our complicity in these ideologies.

“There is a sort of irony to an exhibition addressing our desensitization to mass violence and the spectacle of it, being exhibited in a military tool,” says Veronika Ivanova, co-founder of Bunker 2, which gets its name from its previous use as a shipping container for the Canadian Forces to ship medicine. “Even further, a tool used to elevate the suffering caused by this very same violence,” she says.

With, The Bomb Party, Alabiso-Cahill confronts viewers with their own complicity in the trivialization of violence and war as perpetuated by the mass-media. When confronted so directly with these realities we are forced to question the relationship between spectacle and war as well as aesthetics and power.

The exhibition shows at Bunker 2, located at 346 Campbell Avenue, through Feb. 9. 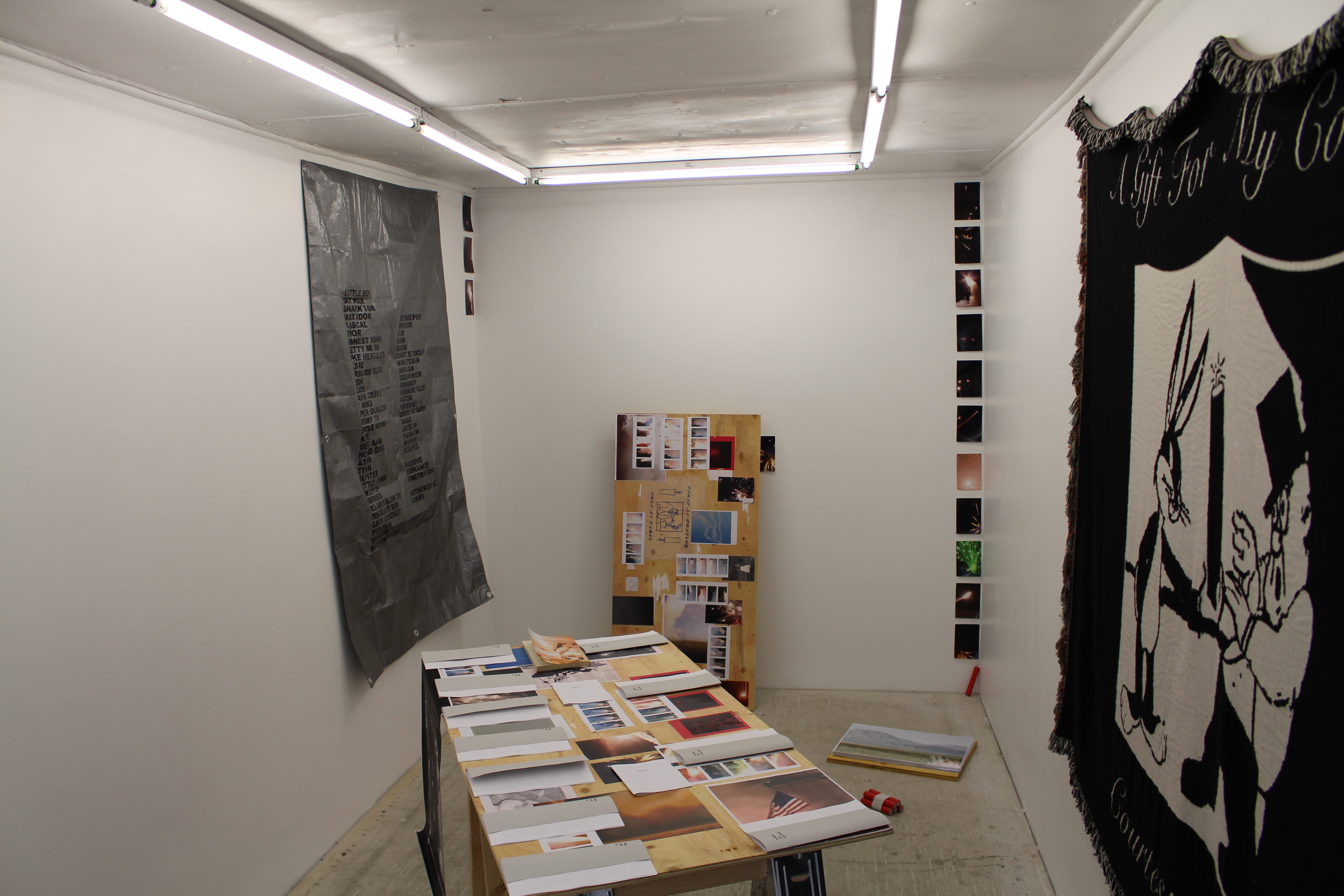 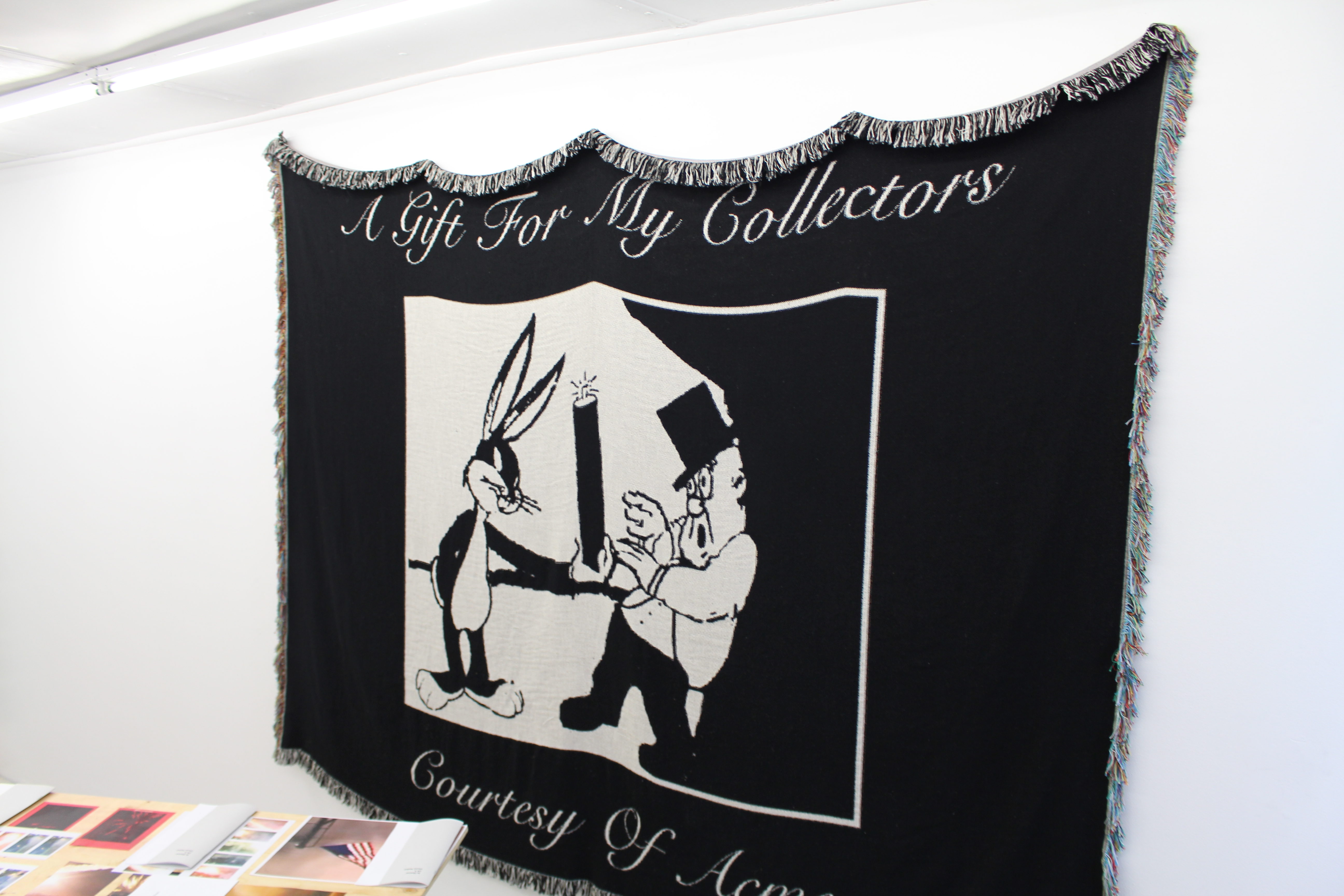 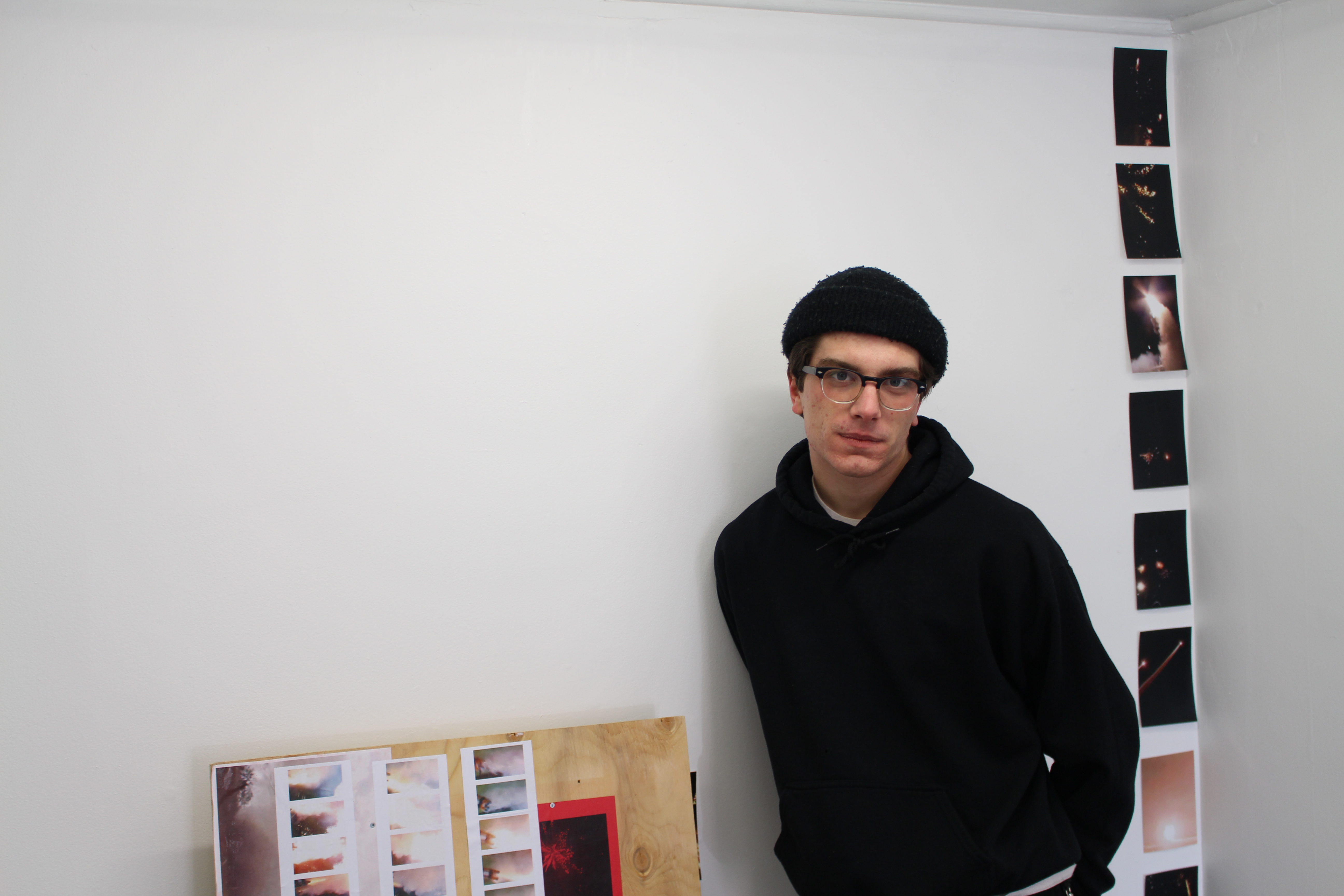 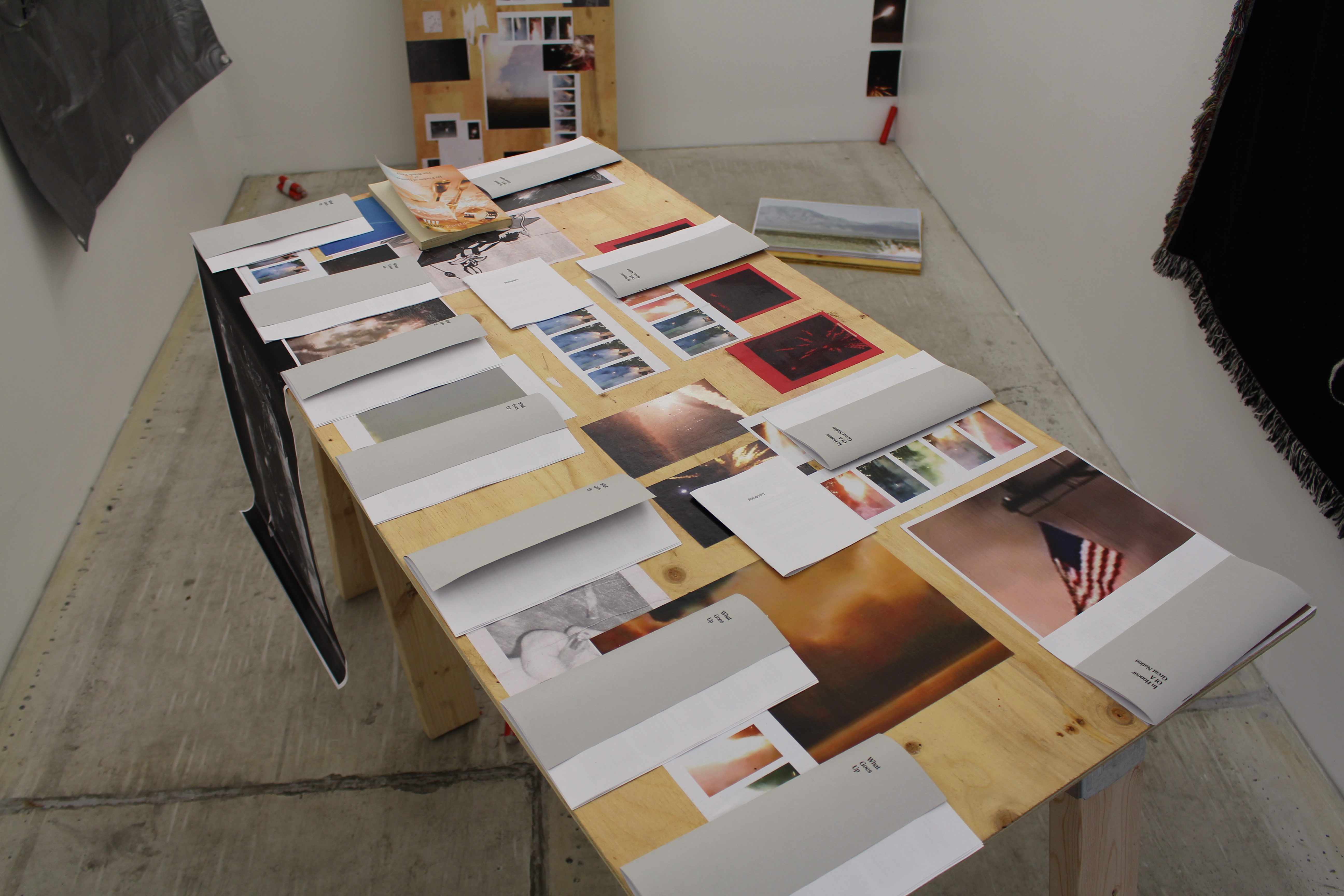 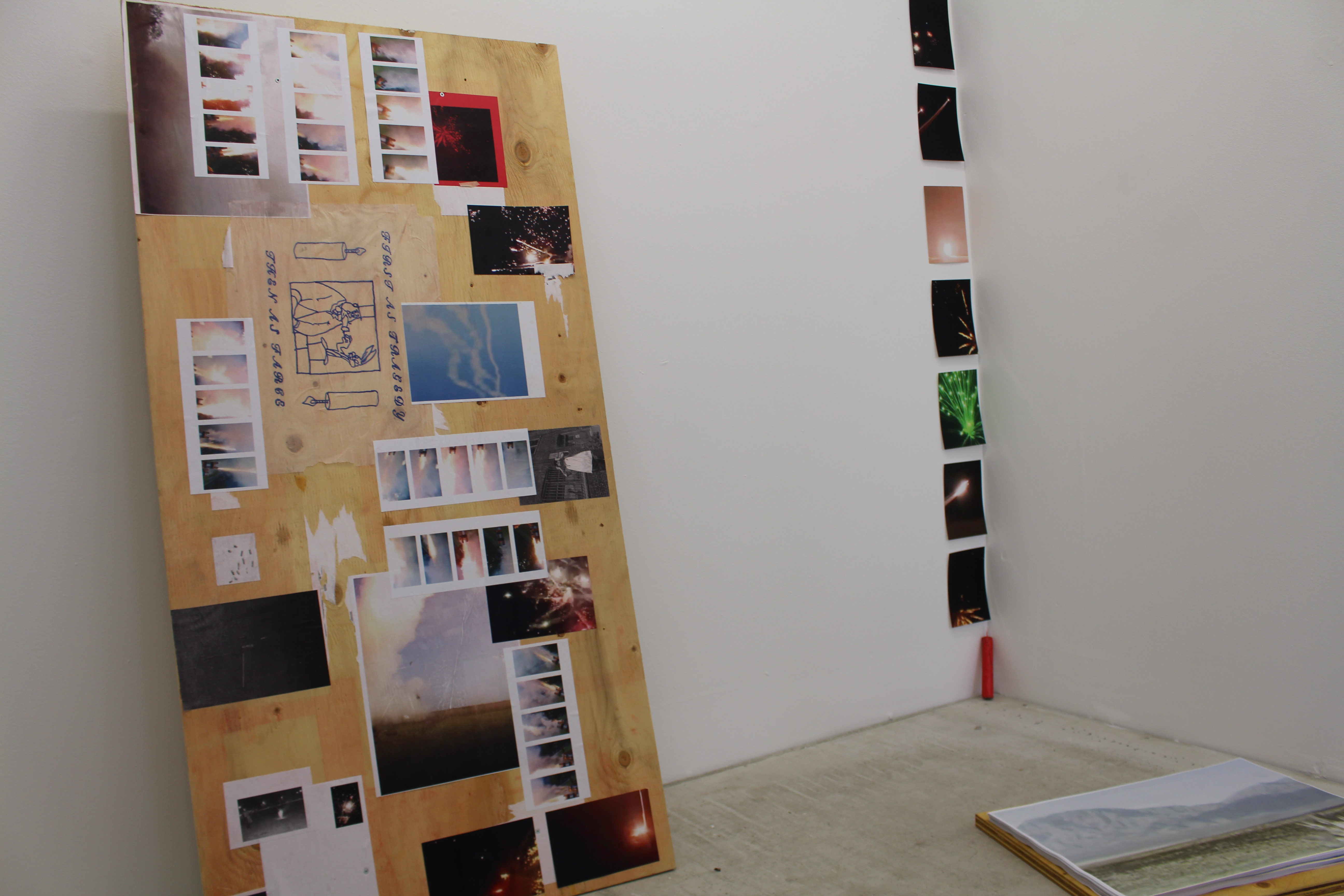 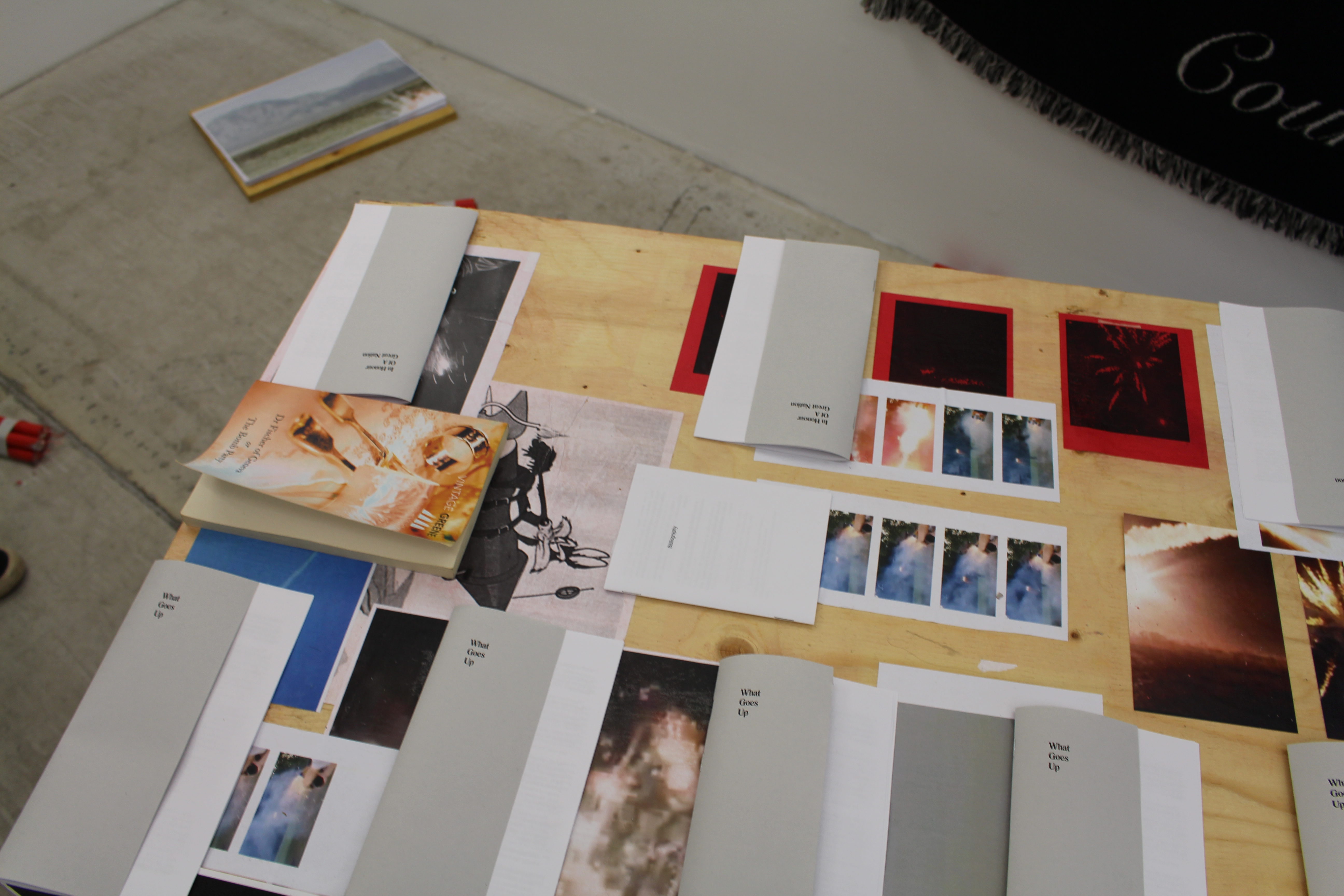 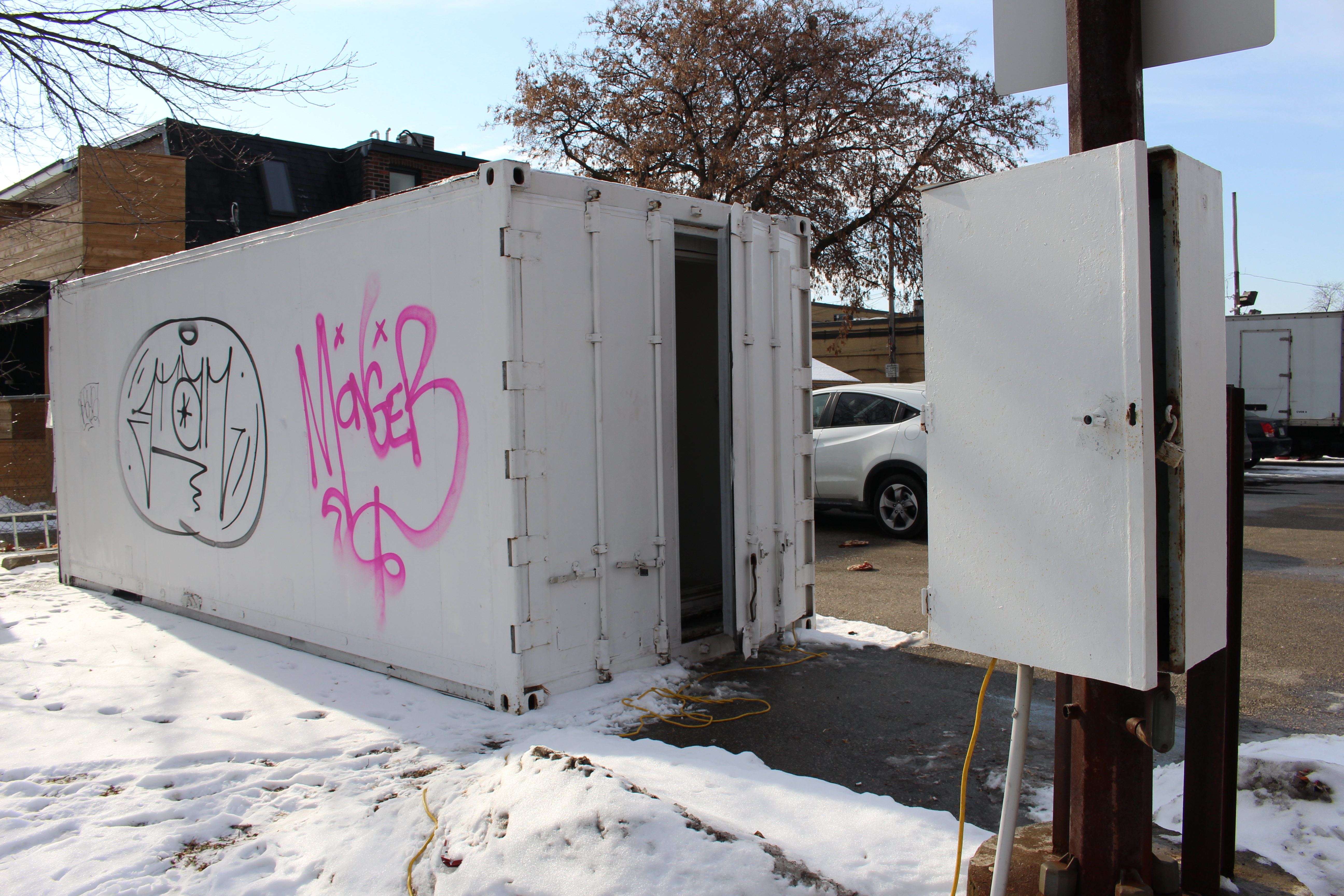 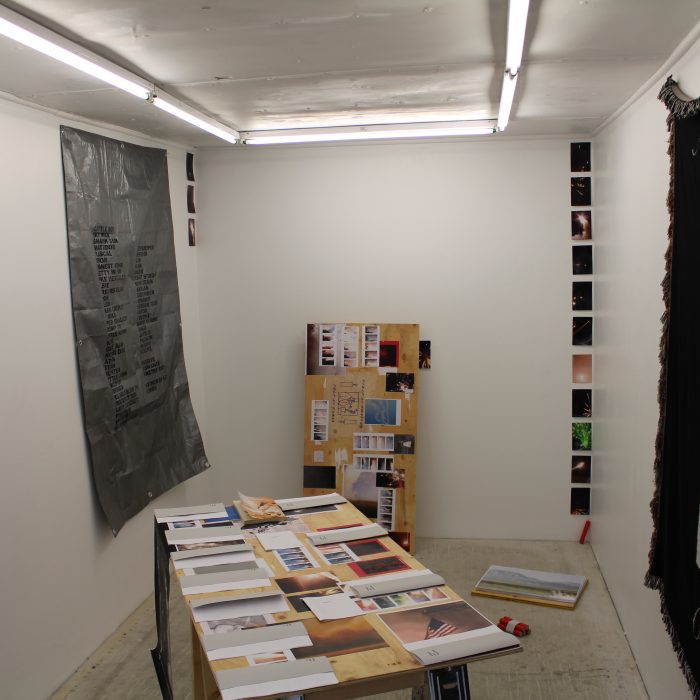 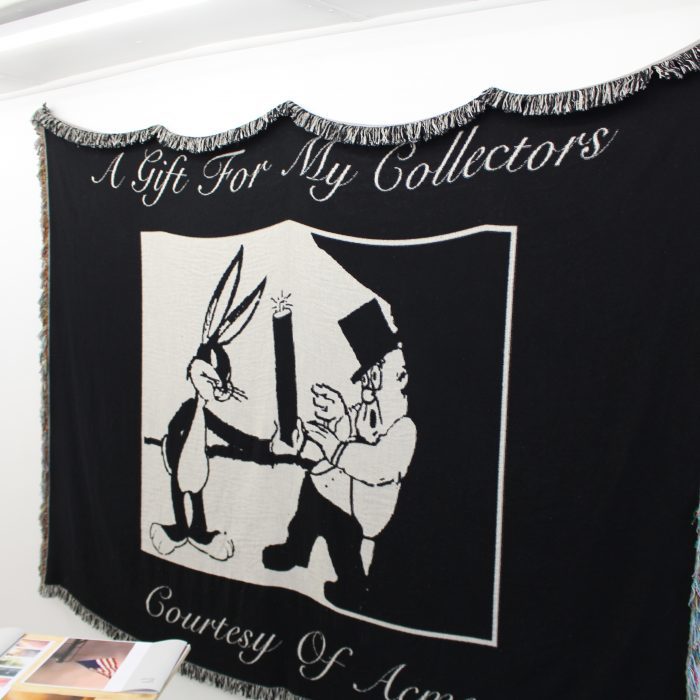 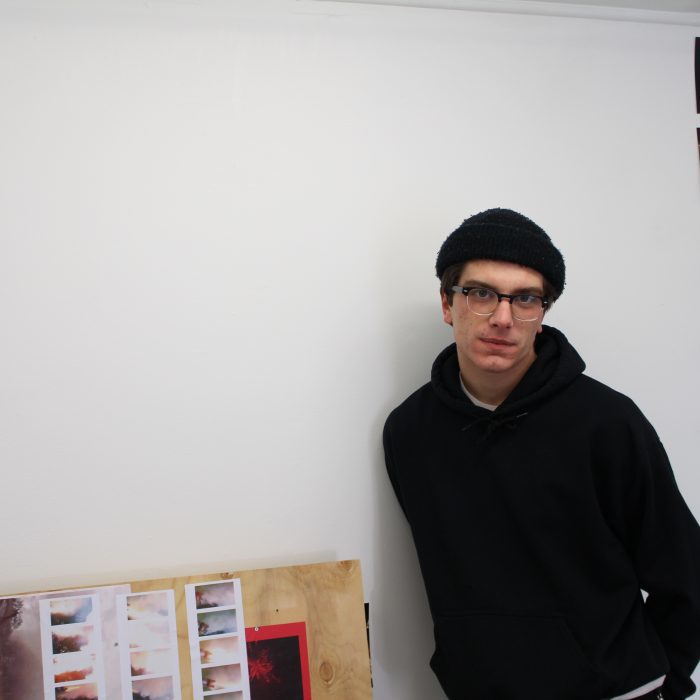 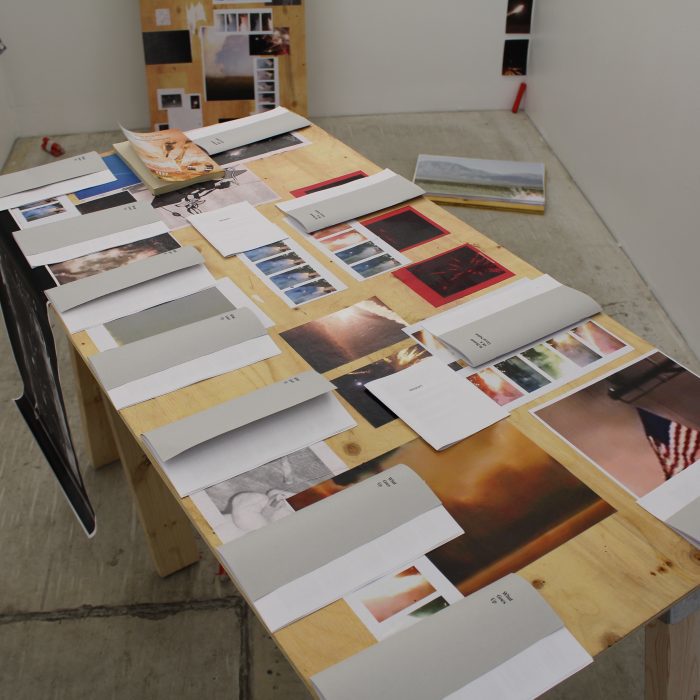 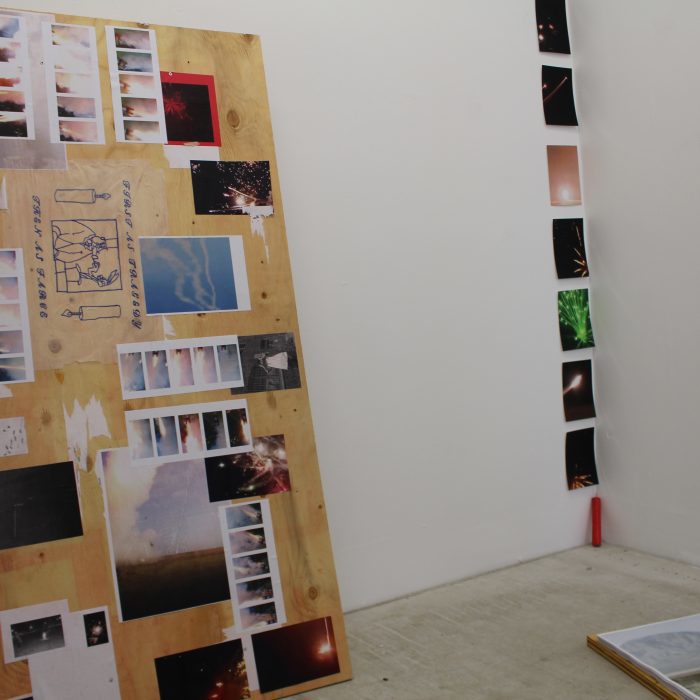 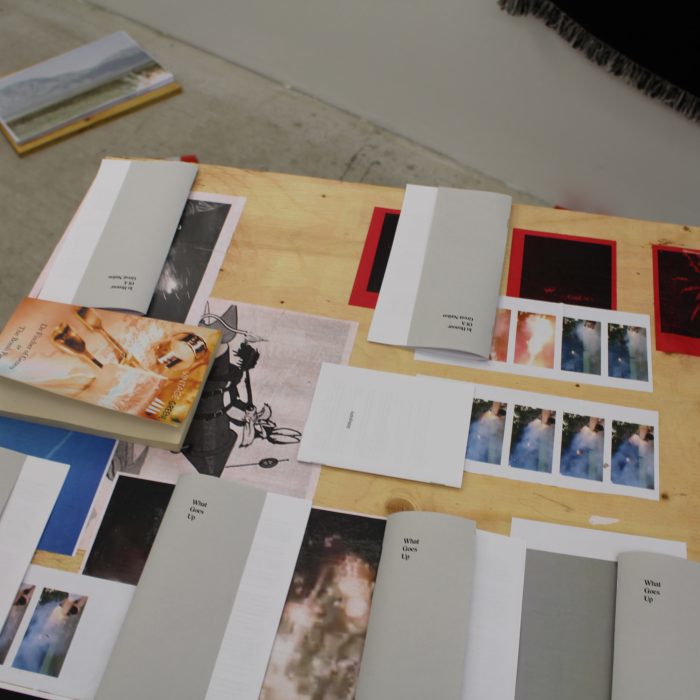 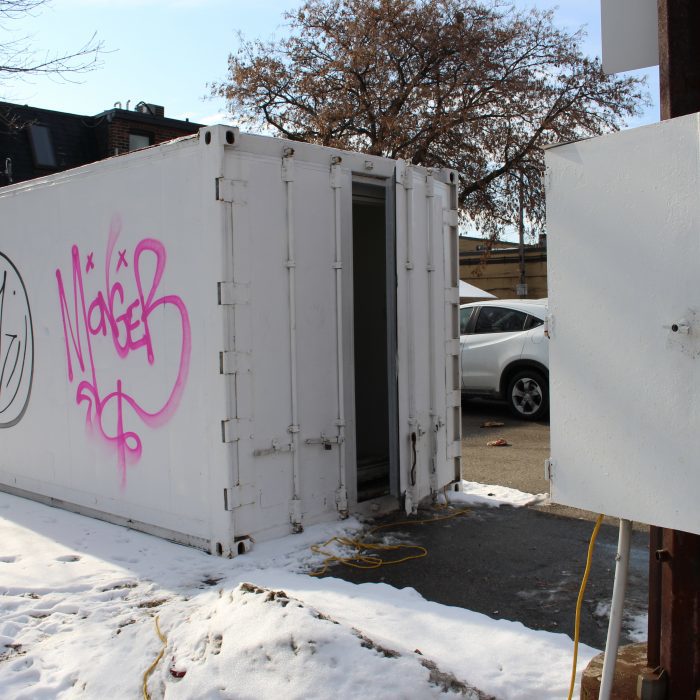 [All Photos by Trevor Hewitt]